New gun control bills are flooding into state legislatures around the country, among the clearest signs that the shooting deaths of 20 children and six adults in a Connecticut elementary school last month have galvanized lawmakers and the public on the issue of guns.

While pro-gun lawmakers have filed dozens of measures to loosen gun regulations since the shooting, including bills allowing schoolteachers to carry concealed weapons in the classroom, these proposals are significantly outnumbered by bills pushing stronger gun laws, according to data that the Law Center to Prevent Gun Violence, an advocacy group that tracks federal and state gun laws, shared with The Huffington Post.

Indeed, the states are much more active around gun legislation than lawmakers in Congress, highlighting the role states can and will play in the gun control debate even if the divisive issue continues to stymie the federal government.

Perhaps most significantly, legislators are floating bills to strengthen gun regulations in swing states like Virginia and Colorado, where pro-gun advocates have long been perceived to have the upper hand.

A flurry of state action to bolster gun regulations will keep the issue in the public eye and increase pressure on Congress to act on the proposals put forward earlier this week by President Barack Obama as part of a sweeping plan to counteract gun violence, gun control advocates said.

"When states pass things easily in a bipartisan manner and D.C. doesn't do anything, it increases the narrative that Washington is broken, and it puts pressure on recalcitrant members to do something," said Josh Horwitz, executive director of the Coalition to Prevent Gun Violence.

Out of more than 190 gun-related bills filed in statehouses between Jan. 1 and Jan. 15, 114 bills strengthen gun regulations, while 67 weaken them, according to the Law Center analysis. (The remainder are considered neutral.)

Between 2009 and 2012 -- a period which saw several high-profile mass shootings, including the shooting rampage in Tucson, Ariz. that killed six and seriously wounded former Rep. Gabrielle Giffords -- proposed state gun laws were much more evenly divided between those that strengthened and those that weakened regulations, said Laura Cutilletta, a senior staff attorney with the group.

"Usually by this time there are far fewer bills, and the bills are pretty evenly divided," Cutilletta said. "What I'm seeing this year is totally different -- it's overwhelmingly toward the side of regulation." 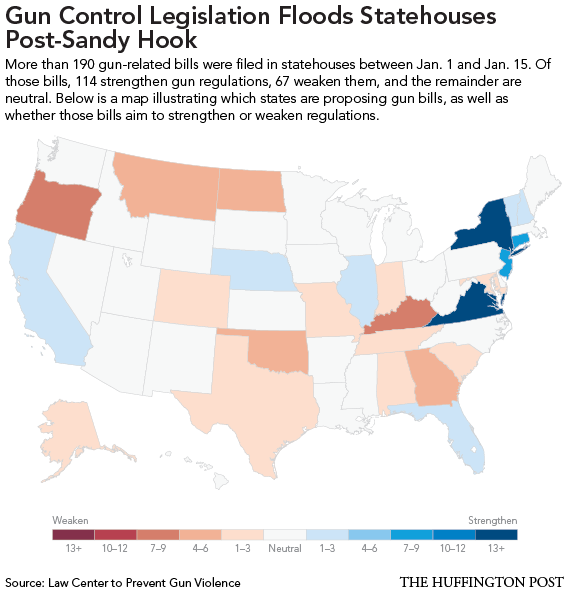 The first state to take action on gun regulation was New York, where Gov. Andrew Cuomo (D) pushed through a major legislative package with the support of Senate Republican leaders earlier this week. The legislation, which bans assault weapons and high-capacity magazines and requires instant background checks for ammunition sales, makes New York's gun laws the toughest in the country.

Democratic leaders in Maryland, Delaware, Massachusetts and Connecticut have all announced plans to follow suit with their own broad legislative gun control packages. Pro-gun groups like the National Rifle Association have vowed to fight such efforts vigorously.

But gun control advocates said that legislative movement on gun regulations in bellwether states like Virginia and Colorado will be the most compelling indication of the political shift created by the Sandy Hook shooting.

On Friday, the Virginia Senate's Republican-led judicial committee rejected bills banning assault weapons and high-capacity ammunition magazines, but approved a measure to substantially strengthen background checks for gun buyers in the state. The bill, which passed the committee 8-6 with the support of the Republican Senate majority leader, requires all firearms sold at gun shows to be subject to a federal background check.

Sen. Henry Marsh, the bill's Democratic author, said he had unsuccessfully pushed the gun show proposal for nearly 20 years and it had never before made it out of committee. On Friday, however, two Republicans and one pro-gun Democrat voted in favor of the measure, giving the bill its first real chance of passage, he said.

"There's a significant chance it'll make it, but don't bet any money on it," Marsh said. "The bill has a road to travel. But you've got to be persistent in this business."

Closing the so-called "gun show loophole" has long been a priority of gun control advocates on the state and federal level, and is one of the key legislative recommendations made by Obama in his gun violence plan earlier this week. An estimated 40 percent of all gun sales nationwide are exempt from background checks because they are made by private sellers, not federally licensed firearms dealers.

A recent poll by Quinnipiac University found that 92 percent of Virginia voters supported requiring background checks for all gun sales.

A similar measure to tighten background checks was proposed last week in Colorado by Gov. John Hickenlooper, a Democrat who has previously shown little interest in promoting tougher gun legislation. Even after the Aurora shooting, where 12 people were killed and many more wounded after a disturbed man opened fire with an assault rifle in a crowded movie theater, Hickenlooper expressed skepticism that tougher gun laws would make a difference in reducing violence.

Yet in a speech last week, Hickenlooper made a strong push for universal background checks for gun buyers.

“Surely, Second Amendment advocates and gun control supporters can find common ground in support of this proposition: Let’s examine our laws and make the changes needed to keep guns out of the hands of dangerous people,” he said.

In Virginia, the background check bill was returned to the judicial committee for reconsideration on Friday, after several senators complained about its phrasing. But Marsh said the measure’s two Republican supporters made him hopeful it would quickly return to the full Senate for a vote. A spokesman for the Virginia Republican Caucus declined to comment on the bill.

Gun control advocates said it was much too early to declare success, but said they were surprised that even a single bill toughening gun regulations had made it through a Republican-led committee.

"I thought everything was going to get killed," Horwitz said. "Last year we played defense the whole time."