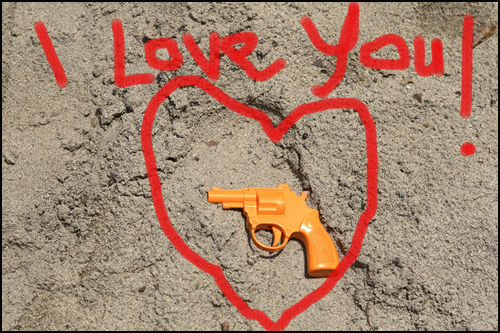 I've been struck by the repeated themes of many of the conversations being had, online and off, since the recent spate of shootings culminating in the Newtown massacre, the second most deadly school shooting in America's history. It seems clear we've reached critical mass -- just how many of these horrific events can happen before we literally become a military state? -- but while a tipping point may have been reached, there's also the very real fear that, regardless of the urgency felt and expressed, the issue will ultimately diminish over time to leave us right we started. Until the next shooting.

The other theme repeated over and over in recent conversations is the enduring and relentless fear expressed by gun lovers that their "rights" and "freedoms" are about to be trampled. Less inclined to talk about 20 dead elementary schoolers, reluctant to admit no one on this earth besides a combat soldier needs a Bushmaster M-4, and eager to shift attention from gun control to mental heathcare issues, gun lovers are nothing if not loyal to the NRA/Second Amendment/Gun Lovers list of talking points, all of which seem to involve fear (but then, what stronger motivation is there for stockpiling weapons than fear?)

Since I've personally engaged in more debates than I'd like with gun lovers who dismiss concerns about dead children with repeated mantras of "I will fight to my death to protect my rights to buy and own a gun," I've put together a list of the Top Ten Things Gun Lovers Fear and why they don't need to. Quoted lines have been taken verbatim from recent conversations. Gun lover or other, please read and adjust thinking accordingly:

1. Non-gun-lovers want to "trample on the Constitutional rights of the 99.9 percent, vast majority of law-abiding citizen gun owners." Not true. Keep your guns... well, most of them; we could do without assault, semi-automatic and combat weapons. But if you love guns as much as you say you do, enjoy them... but sanely. We just want to see common sense rules and better, more useful restrictions implemented. And ask that you all try harder to keep your own stash locked up and away from children, criminals, and mentally ill sons.

2. "Everyone who doesn't own guns thinks all guns and gun owners are bad." Not true. We hate the carnage caused by guns, we're not fond of the braggadocio and macho posturing of many gun lovers, and the culture of guns -- the swaggering gun shows, camouflage fashions... Ted Nugent -- elude those of us not enamored. But a safe, sane, responsible gun owner who enjoys the sport or keeps a gun safely in the home for protection? Have at it. But stop being over-sensitive about what everyone thinks about you. We're actually not all that interested either way and only assign "bad" to those who deserve it: people who kill with guns or those who leave their guns in places where kids/others can find and use them to wreak havoc.

3. "Those calling for more gun control laws and enforcement are really trying to do away with the Second Amendment." Not true. Though the amendment written hundreds of years ago at a very different time and with very different weaponry at hand could use a re-education campaign. Gun lovers' insistence that the amendment's assurance of the "right to bear arms" trumps all other public safety concerns is narcissistic and culturally tone-deaf. A "tweak," perhaps, is in order, but abolishing it? Naw, it fits too nicely between the First and Third.

4. "Sensible gun controls = taking away our guns." This is a weary old meme, trotted out regularly to ward off logical gun control laws or the proper enforcement of laws already on the books. Frankly, we don't care about your guns, don't want your guns, have no interest in confiscating all your guns. Your paranoia becomes deflection. When we say we want "sensible gun controls," that's what we mean. Refer to #3.

5. "If you don't fight against the creeping government you will soon not be able to set foot outside your house without violating some government regulation." Really? Do we really need to discuss this? OK... you are the government, you elect your government officials, you vote on propositions, new laws and regulations that are designed to offer protections, mitigate corruption, set boundaries, and limit damage. What you define as "creeping government" is the action of a society doing what it can to protect the greater good of its citizens. If you don't want to engage with government, don't drive on publicly funded roads, enjoy publicly funded parks, avail yourself of police, firemen, public schools and colleges, Medicare....

6. We will all stop referring to Ted Nugent and your one high-profile celeb will lose his cachet. Naw. He's a frothing madman and a certifiable lunatic but he's such good copy. You can relax; we hope Ted's around for a good long time, all plump and pissy and ready for us to poke fun at! And besides, you've still got Jon Voight and Kelsey Grammer!

7. "All the focus on gun control ignores the need for better mental healthcare." Let's get this straight: everyone who wants better gun control laws also recognizes the urgent need for more effective mental healthcare protocols. This isn't an either/or proposition. The conversation needs to include both issues and requires very wise, thoughtful minds to sort through the various elements... then design better laws, regulations, controls, etc., to bring both gun control and mental health intervention to a far more productive and effective point. Because they are linked; in Newtown, CT, the tragedy occurred when the high-powered weapons legally purchased by a mother were left accessible to a mentally ill son who used them in the crime.

8. "Don't allow anyone to trump your rights for the 'good of society'... our society isn't that good." This is a quote from a right-wing Texan who is a walking encyclopedia of conservative rhetoric, and with this line he belies the cynicism, selfishness and the deep misunderstanding of his fellow Americans that he and many of his ilk have. We all, every day, make decisions and follow rules that are influenced by what is the "greater good." Frankly, our society, our people -- moms, dads, siblings, friends, colleagues, etc. -- are, by and large, really good people. There are always those, but the majority understand that abiding by a restriction, following a rule, giving up a right because of some tragedy that incited the need for necessary restrictions and laws, is simply being a good American. Join us.

9. "Until the bad guys don't have guns anymore, the good guys shouldn't have to give up theirs." Refer to #4. This dreaded fear of "giving up" your guns is based on the delusion that someone plans to force you to hand over your hardware. Who? Who is going to implement rounding up all your guns in lieu of going after the "bad guys"? No one, because that's not real; that's a smoke screen. Stop fearing it, it doesn't exist. Deflecting to that panicked response abdicates you from participating in the real conversation the rest of us are having about sensible gun control and mental health care improvements.

10. "I'm a member of the NRA and we don't do gun control." WRONG! This may really surprise you but a poll was done by Frank Luntz, (a Republican, no less!) that showed that a majority of NRA members "favor sensible gun controls." Shocked? Me too. But it offers hope for compromise. Let's run with it.

We've proven we do have the capacity to put aside our self-interests to do what is right for our community. We learned to give up some of our personal freedoms after 9/11, when 3,000 people died and our world changed forever. Homeland Security came into being, as did the Patriot Act; restrictions on travel and immigration increased, some even feel basic civil liberties have been encroached upon. Yet we did it, accepted it as a response to the tragedy and those 3,000 lives lost. We adjusted as a collective, a community, for the greater good of the country.

In comparison to those 3,000 deaths, 12,000 people were killed by guns in one year in this country, four times the number on 9/11. Surely this slaughter deserves -- requires -- the same kind of community response as 9/11. So let's get everyone necessary to the table and get it done... then let's all get on board, all of us. Because, gun lovers, we've acknowledged your fears and are prepared to consider them rationally in the greater conversation. Now please put aside blind self-interest, embrace cultural empathy, be willing to make some sacrifices, and commit to affecting real change. It can and must be done.

Follow Lorraine Devon Wilke on Facebook, Rock+Paper+Music, and Addicting Info; details and links to her other work, visit www.lorrainedevonwilke.com.