Immediately following the devastating school shooting Friday in Newtown, Conn., a new poll suggests a bump in support for stricter gun laws, with half of Americans saying they support making the nation's gun laws stricter.

The new HuffPost/YouGov survey found that 50 percent of Americans say gun laws should be made more strict than they are now, compared to 43 percent who said that they should remain the same (29 percent) or be made less strict (14 percent). The poll also found support for banning semi-automatic weapons (51 percent to 33 percent) as well as magazine clips holding more than 10 rounds (54 percent to 32 percent).

The main weapon used by shooter Adam Lanza was a semiautomatic assault rifle, and he carried several high capacity magazines, though that information had not been released while the poll was being fielded. On Saturday White House press secretary Jay Carney told reporters that reinstating the federal assault weapons ban that expired in 2004 "does remain a commitment" of President Barack Obama. On Sunday, Sen. Dianne Feinstein (D-Calif.) announced that she would be introducing a new assault weapons ban bill on the first day of the new Congress.

YouGov's previous survey on the issue in August of this year found 44 percent supporting stricter gun control laws and 47 percent supporting gun laws remaining the same or less strict. A month before that, shortly after the movie theater shooting in Aurora, Colo., the percentage saying gun laws should remain the same or less strict was as high as 50 percent. No previous YouGov survey has found support for stricter gun control as high as 50 percent, though shortly after Congresswoman Gabby Giffords was shot support reached 48 percent on one poll.

Generally speaking, mass shooting incidents have made little lasting impact on public support for stricter gun laws. The Columbine shooting 13 years ago is one event that did cause a noticeable bump in public support for stricter gun laws. Columbine was the largest school shooting incident in American history until Friday, and the story was the single-most followed news story of 1999, as measured by the Pew Research Center. 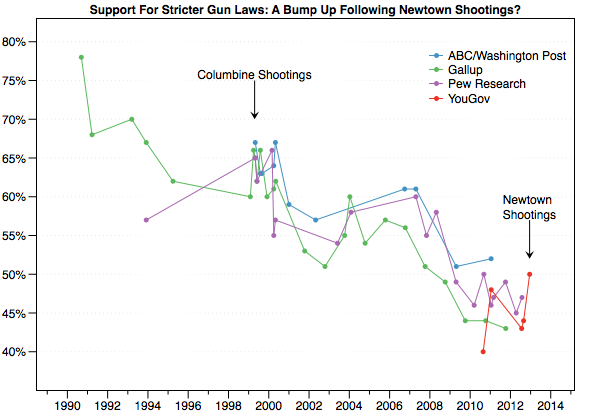 The poll found little sympathy for the argument frequently made by gun rights advocates that Americans would be better protected by more, rather than fewer, guns. Forty-six percent of Americans said that stricter gun control laws and enforcements were most likely to lead to fewer mass shootings, while only 34 percent said that allowing more private citizens to carry guns for protection would be the more protective measure.

The HuffPost/YouGov poll was conducted Dec. 14-15 among 1,000 U.S. adults. It has a margin of error of plus or minus 3.7 percentage points, though that inherent variation does not take into account other potential sources of error, including statistical bias in the sample. The poll used a sample selected from YouGov's opt-in online panel to match the demographics and other characteristics of the adult U.S. population. Factors considered include age, race, gender, education, employment, income, marital status, number of children, voter registration, time and location of Internet access, interest in politics, religion and church. Crosstabs for the poll are available here.