The Columbine shootings generated more public interest, as measured by the Pew Research Center, than any other news story in 1999. Polls by Pew Research and Gallup conducted in the wake of the tragedy found increases of 6 to 8 percentage points in support for stricter gun laws. 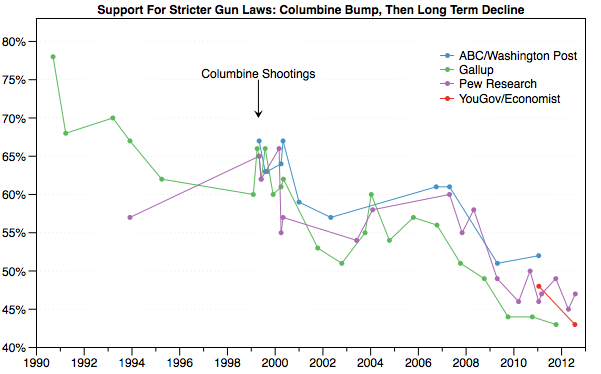 The post-Columbine bump faded about a year later, and support for stricter gun laws remained roughly constant over the next eight years. Following the 2008 election, however, it dropped off considerably. By April 2010, Pew Research found more Americans placed greater importance on protecting the rights of gun owners (49 percent) than on restricting gun ownership (45 percent).

The movie theater shootings in Aurora, Colo., earlier this year did not noticeably shift public opinion. Surveys by both Pew Research and YouGov/Economist after the killings found little or no change in overall attitudes about gun laws.

But the exceptionally horrific details of the Sandy Hook attack -- in particular, the targeting of young children -- raise the possibility of a change in public attitude like the one following the Columbine tragedy. In interpreting the long-term trend, consider the following context:

First, while support for stricter gun laws has declined in the polls across several measures, Americans remain roughly evenly divided on the issue. The Pew Research Center found about equal numbers of Americans preferring to protect "the right to own guns" (46 percent) and to "control gun ownership" (47 percent). A modest increase in the second category would be enough to create majority support for stricter gun laws.

Second, there is broader support among Americans for incremental changes to gun laws. Polls by CNN and YouGov earlier this year found overwhelming support for several specific gun control policies: background checks, bans on gun sales to those with mental health problems, waiting periods before gun purchases and a national registry of gun ownership.

1 / 21
December 14, 2012 -- Newtown, Conn. -- 27 dead (including gunman)
The shooting at Sandy Hook Elementary on Friday was the second-deadliest school shooting in U.S. history, leaving 27 dead -- including 20 young children. President Obama <a href="https://www.huffpost.com/entry/obama-newtown-school-shooting_n_2301823">gave an emotional address</a>, calling for "meaningful action": As a country we have been through this too many times. Whether it is an elementary school in Newtown, or a shopping mall in Oregon, or a temple in Wisconsin, or a movie theater in Aurora, or a street corner in Chicago -- these neighborhoods are our neighborhoods, and these children are our children. We're going to have to come together to meaningful action on this, regardless of the politics.
AP