Support for stricter gun laws has dropped since reaching a peak just after the school shooting in Newtown, Conn., according to two polls conducted immediately following this week's Navy Yard shooting in Washington, D.C. However, both surveys found that support for stricter laws remains higher than it was before the Newtown shooting.

Likewise, a Gallup poll released Friday found that support for stricter gun laws has fallen from a high of 58 percent after the Newtown shooting to 49 percent now. Both the Gallup poll and the HuffPost/YouGov poll were conducted Sept. 17 and 18, after the Monday deaths of 13 people in the shooting at Navy Yard in Washington, D.C.

Some policies supported by advocates of stricter gun laws still receive broad support -- most notably universal background checks. A HuffPost/YouGov poll conducted in August found that 79 percent of Americans support universal background checks, including for gun shows and private sales. However, overall support for stricter laws has shown a marked decline over the past 25 years. Two major school shootings -- Columbine and Newtown -- have reversed that trend, but only temporarily. 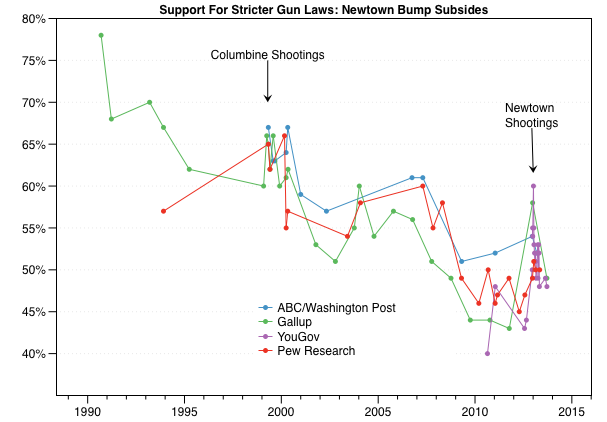 In accordance with the longer-term trend against support for tightening gun laws, the post-Newtown bump in support never reached the same level that it did after Columbine.

Following other mass shootings, including the recent shooting in Washington, polls have found little evidence of anything more than fleeting changes in opinion on gun laws. A HuffPost/YouGov poll conducted a month ago, before the Navy Yard shooting, found that 49 percent of Americans said they support stricter gun laws -- almost identical to the 48 percent who said so in the most recent HuffPost/YouGov poll.

Both the latest HuffPost/YouGov poll and the Gallup poll were conducted before the shooting Thursday in Chicago in which 13 people were injured, including a 3-year-old boy who was shot in the head.

And when it comes to ways to reduce the likelihood of future violence, many people didn't look to gun laws. By a 57 percent to 29 percent margin, the HuffPost/YouGov poll found that most people think better mental health care is more likely to prevent future mass shootings than stricter gun laws. Similarly, the Gallup poll found that 48 percent of Americans place a "great deal" of blame for mass shootings on the "failure of the mental health system to identify individuals who are a danger to others," compared to 40 percent who said the same of "easy access to guns."

On the other hand, the HuffPost/YouGov survey showed little sympathy for the argument frequently made by gun-rights advocates that people carrying guns would lead to lower gun violence. A plurality of respondents to the poll rejected that argument, saying by a 44 percent to 38 percent margin that stricter gun laws were more likely to prevent mass shootings than allowing more people to carry guns for protection. Just after the Newtown shooting, respondents said the same by a 46 percent to 34 percent margin.

Senators Who Voted NO On Background Checks