As someone who grew up in a place where guns designed to kill people are more or less banned and where no one feels that some essential freedom has been lost (on the contrary, freedom from fear is cherished) I often wonder what it will take for Americans to absolutely reject the groups like the NRA, all their ideas, and anyone who supports their morbid, necrophiliac love of an element of the constitution that is anachronistic, poorly written, unclear, and insanely stupid given modern weaponry. After which, we could actually start to do something to save the approximately 30,000 lives lost to gunshot wounds every year, many of them children.

When I adapted John Grisham's book Runaway Jury, changing it from a lawsuit about tobacco to one about guns, I met gun manufacturers who, supported by the NRA, proudly refused to add even the most basic safety features to guns and resisted any kind of legislation aimed at preventing negligent marketing of guns to individuals who were clearly selling them on to criminals. It was the most cynical thing I ever witnessed, this faux reverence for the constitution. My belief is that sooner or later a gunman or gunmen with legally acquired weapons will kill not 12 or 20 people but several hundred children (who no one advocates arming for self-defense) trapped in some unique location. And then, maybe, Americans will say, "Wow, I wonder if we should do something about this arcane piece of constitutional junk and start bringing America into the modern world."

I dislike reverence in almost all forms, it's usually a kind of constriction on the intellect, but reverence for old documents is doubly stupid when, as in this case, and rather unusually, the writers of the document had the good sense to write in a provision for changing the thing when needed and indeed encouraged the idea of doing so! I'm sure, as with so many things, this would have happened decades ago if America wasn't so arrogantly averse to looking at other countries where various things function better than in "the greatest country in the world." And demonstrably so. Just look at the figures for murder by gun in any other country in the world outside of war zones. Or look at what has happened in the other city I sometimes live in, Rio de Janeiro.

People say they want to keep their guns in case criminals with guns come for them, and others say it's an impossible situation to solve, guns being so entrenched in North American culture. Well, all of that applies ten times over in the favelas of Rio which are, or were, much more infested with guns than any slum in America. Up in some favelas the gangs had guns that could bring down helicopters.

Here is a photo of me and the man who is solving the gun problem in these favelas, and in the culture of the favelas, Rio State Public Security Secretary Jose Mariano Beltrame. 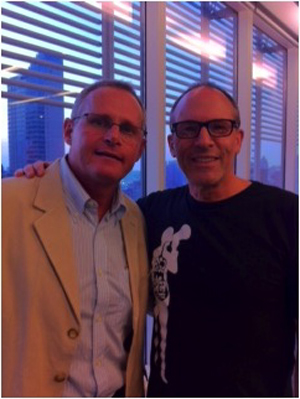 Beltrame came up with the following strategy. He warned the favelas they were going to be invaded on a certain day and anyone caught with guns would be imprisoned. He then told the favela dwellers of an ongoing anonymous-reporting phone line so they could warn the police of large and small caches of arms.

And he assured them that once their favela had been taken over, community policing would take over. And -- and here's the key thing that's left out of all gun arguments in America -- SOCIAL SERVICES would be provided to help people get off drugs, train for jobs, find jobs, improve their homes, improve their schools, etc. Given a choice between a functioning gun-free society or one ruled by fear and greed, the community turned against those who owned guns, turned them over to the police, and -- perhaps most inspiringly of all -- accepted the social services but as a community went way beyond the government offered gift, taking control and care of their own neighborhood.

Anyone who doubts the possibility of radical and beautiful social change should see a crop of new Brazilian films that have come out of the favelas, or visit Rio which has become a different and so much more pleasant city -- and not just in the favelas. Just as with drugs, mere punitive action is demonstrably useless and often counterproductive. Look at the prison population in America while gun and drug problems continues unabated. Charity doesn't help much either.

There's a thing called government -- we vote for it, it's us if it's not corrupted by money -- and it can do anything if we don't constantly pour scorn on it as if it was something detached from us rather than our best and most just expression of ourselves.