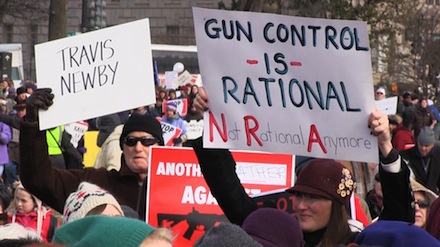 This was originally published on December 16, 2012 with the title Replying to my pro-gun friends. It's been edited significantly and includes a reply to Wayne LaPierre's testimony at the Senate hearing on January 30, 2013.

Dear friends who can't tolerate anyone bringing up gun control: You're not going to intimidate me with your !!!!s, ????s, WORDS IN ALL CAPS, namecalling, and threats to unfriend. I am going to speak my mind regardless of your protestations.

I just wish you loved the First Amendment as much as your reading of the Second Amendment. Instead trying to bully people into submission, let us speak freely. Most people aren't calling for a ban on guns contrary to your knee-jerk reactions. We want better regulations on something that is already regulated. We just want improvements. To quote my friend Jim Sanches, there's a difference between regulating and banning.

In fact, I am pro-non-assault-style-guns-with-high-magazine-capacity for civilians for self-defense after thorough background checks, training, and if responsibly maintained.

Respect that America needs to talk about this massacre considering many factors and nuances. So, stop making wild accusations, calling people morons, and trying to shut down discussion.

Dear friends who say that calling for better gun laws is like calling for a ban on cars: First of all, cars are not designed to kill people. Deaths arise from accidents. Secondly, car ownership and driving are highly regulated activities including an elaborate licensing system, insurance mandate, penalties and terms for getting licenses revoked. What we are saying, to quote my friend Mike Stafford, is like calling for seat belt laws after a car crash, not banning cars.

Jim Sanches writes, "If they're going to use the car analogy, fine, let's regulate them as well as we do cars then. We mandate seat belts, headlights, the licensing of every car yearly and liability insurance on every car for starters. Not to mention all the rules of the road, traffic lights, stops signs, etc we all must obey even if we've never violated any of them."

Dear friends who say that guns don't kill people, people kill people: People with guns kill people. Guns are dangerous like poison is dangerous, especially guns designed for combat. It's not something we want readily available and in every home and public building. Even if people try to be responsible about its storage and usage, accidents and terrible destruction will occur, especially with children and mentally unstable people around. This is a public safety issue.  If we can accept restrictions on smoking for public health reasons, why not accept restrictions on gun purchases for public safety reasons?

Dear friends who say we need guns to protect ourselves from the government: To beat the U.S. government, you're gonna need bigger and better weapons than guns. Would you be in favor of legalizing civilians owning tanks, bombs, fighter planes, chemical, biological and nuclear weapons? Also, if you really believe the government is out to get you, it's likely that you suffer from a mental illness.

In general, I have a problem with you thinking it's patriotic to shoot government employees with your guns.

Dear friends who treat the Constitution as some holy scripture from God and who think they have divined the correct, original, literal, interpretation of it: News Flash! The Founding Fathers were not psychics who could predict the future. They didn't think of everything. The Constitution doesn't mention online identity theft. Does that mean we shouldn't protect ourselves from it? The genius of the framers of the Constitution is that they wrote a living document that was designed to be amended as we go. There are limits to the Second Amendment as there is to the First Amendment. For instance, you can't yell "fire" in a crowded theater because it endangers the public.

There are ongoing debates about how to interpret the Second Amendment. Jeffrey Toobin writes in the New Yorker:

Before the nineteen-seventies, the N.R.A. had been devoted mostly to non-political issues, like gun safety. But a coup d’état at the group’s annual convention in 1977 brought a group of committed political conservatives to power—as part of the leading edge of the new, more rightward-leaning Republican Party. The new group pushed for a novel interpretation of the Second Amendment, one that gave individuals, not just militias, the right to bear arms. It was an uphill struggle. At first, their views were widely scorned. Chief Justice Warren E. Burger, who was no liberal, mocked the individual-rights theory of the amendment as “a fraud.”

Dear friends who think we need more God in the classroom: Our country is founded on the principle of the separation of church and state because it is dangerous to mix power and religion. Historically, it's led to tyranny. No, we do not need more religion in classrooms. We need more common sense and respect for the give-and-take of our democratic process. We need to insist on fact-based, civil dialogue.

Dear friends who think we need more guns in the classroom to protect our children: Why stop at arming teachers? Why not arm children? How far will you go in thinking that easy access to guns is the solution to the problem of gun violence in our society? Do you want any regulation at all? Do you want buying assault rifles to be as easy as getting a Slurpee from 7-11? Would you allow children to purchase guns? Do you really think easy access to combat weapons is about personal freedom? Do you really think that's what Founding Fathers had in mind when they made enormous sacrifices to build America? I can't understand how you're thinking about this.

Dear friends who fear that your guns will be confiscated: NRA seems to enjoy inciting fears among gun owners that guns will be banned and their weapons confiscated. This is just a fear tactic. I don't see anyone on the national stage calling for this, certainly not on Capitol Hill.

There is a big difference between NRA members and NRA leadership by the way. There are ideas for better regulations that the majority of NRA members agree on, but the NRA leadership does not advocate for them or are fiercely opposed to them. For example, the majority of NRA members support closing the gun show loophole, reporting lost and stolen guns, and states sharing records with the National Instant Background Check System.

Instead of encouraging discussion and real information, NRA spreads fear and misinformation. Please listen to what we are actually saying instead of what you fear we are saying.

Dear friends who say I can't talk about gun control because I've never handled or owned a gun before: Have you ever taken crack and heroin? Do you have a position on what our laws should be regarding those drugs? Perhaps I should shoot up heroin, become an undocumented immigrant, and go to prison before I can call for ending the war on drugs, revising immigration policies and reforming the criminal justice system.

Dear friends who say that Hitler confiscated guns so don't confiscate guns: First of all, the vast majority of people are not calling confiscating guns. I'm certainly not. Secondly, this is just historically false. Hitler relaxed gun control laws of the Weimar Republic. Thirdly, Hitler loved dogs and used the bathroom. It's not a great argument to say Hitler did x, so therefore don't do x.

Dear friends who say Sandy Hook is a hoax: I question the state of your mental health. If you really believe this, I think you suffer from severe paranoia and should be disqualified from buying guns.

Dear friends who say "Second Amendment shall not be infringed!" no matter who is speaking, under what conditions, and which specific suggestions are made to try to keep guns away from homicidal people: I've listened to your arguments and frankly, you guys don't sound like freedom-loving, Constitution-protecting individuals. You just sound brainwashed. There are only so many ways a person can say that I don't give a crap about anyone else but myself and guns make me feel powerful and that is all that matters.

[This is not directed at all gun owners. Just the ones who don't want to engage in any policy discussions involving stricter guns laws and try to shout people down invoking the Second Amendment.]

Dear all friends: I'm finding that it's very hard to engage in a constructive dialogue with people hellbent on bullying you until you give up or repeating gun lobby propaganda ad nauseam. Sometimes you just have to call a spade a spade in the way Joseph Welch called out Senator McCarthy during Army-McCarthy hearings. I want to direct the same lines said by Welch in 1954 to Wayne LaPierre, CEO of the NRA, who testified at the Senate committee hearing on January 30, 2013 and shamelessly uses fear-mongering to boost gun sales: Have you no sense of decency, sir, at long last? Have you left no sense of decency?

Annabel is a filmmaker and the founder of Coffee Party USA. Her new documentary project is Story of America.