It sank in slowly. I was in the parking lot at a grocery store that Friday when I heard that a school in Connecticut was locked down. I thought "Overreaction" and time passed and then we knew. I'm so close to my 6-year-old grandson. At 70, I'm reconciled to being mortal, but my feelings about his safety and about all of the grief in so many families were beyond naming. I recoil from imagining that it might have been his school, and the horror of the Sandy Hook Elementary School tragedy had me shaken. 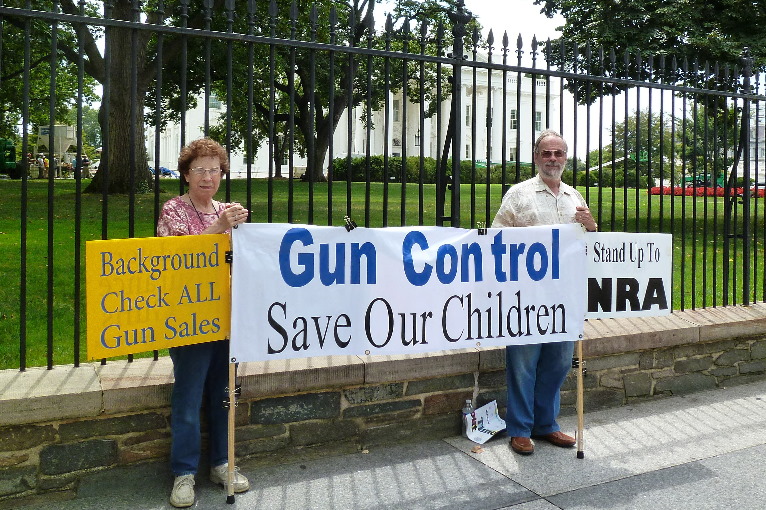 My wife is the action person of our partnership and she said we have to do something and keep it up. I made a banner and signs. The next day, we were standing for the first time in front of the White House. Even though it was cold in December there were many people passing by, both locals and tourists.

We're not protesters, at least not against the administration. We know that, no matter how difficult it is to make progress, politicians of courage and good will are with us in their hearts. We want to back them up and to move the issue from their hearts to their words and on to their actions. That first time, one of our signs read, "We love you Mr. President. Please put gun control on the agenda."

That first time and for weeks, people were in shock. They would tell us about how deaths and injuries from guns had altered their lives. People who had some connection with Newtown would stop. One man told us he had been a principal at the high school in Red Lake, Minnesota in 2005 when they had the shooting that killed 10 including the shooter. Many people have buried pain from incidents in the past, and the killings at Sandy Hook Elementary School had brought it to the surface. We learned that our role is to listen.

We continue to think about children; we think about people we've known who have died from guns and our concern gets wider because of the people that we are talking to. The message on our banner, "Save Our Children," is a constant; but we have smaller signs with particular demands -- "Stand Up to NRA," "Background Check All Gun Sales," "Not Needed, Not Safe: Rapid Fire Weapons and Ammo." The failure of legislation in the Senate is disheartening but leaves our resolve intact. We know that this is a long haul effort and that we can stick with it because our grandchildren will be around long after we're gone.

Eight months later, some of the shock has worn off, but people are still telling us stories of what it means to them or about their own experiences. Person after person gives us a thumbs-up or says "thank you for what you're doing." Our picture is taken every few minutes with a promise to put it on Facebook. Kids and friends stand with us to get into the picture. We get about twenty positive responses for each person who makes a hostile remark. Most negative comments are made slightly under the breath or while a person is walking away, but sometimes a pro-gun person comes up to argue. The arguments are pretty much the canned talking points in wide circulation such as "Guns don't kill; People kill" and we know that it's fruitless to address them directly. We answer, "Children are precious, what would you do?" That's our message anyway and we're not here to argue.

Most of the people passing are tourists from around the U.S. and from all over the world. Trying to predict what a person's position is from their appearance doesn't work, so we assume that people support us unless they make it clear that they don't. The state that people come from doesn't tell us either, plenty of Texans are for taking strong measures to stop gun violence.

Visitors from other countries are a different matter. Almost all of them think that the US gun policies make no sense at all. They joke that the State Department should be paying us since we make Americans seem less crazy. A lot of people from Europe and Canada tell us that things are so much better there. Many people from Asian countries think that the need to keep guns under tight control is obvious. But, the people from Australia show the most pride, they tell us over and over that, after the horrible incident in Hobart, Tasmania, their government outlawed most types of guns and has prevented another massacre in the decades since and that the number of murders has gone down.

A Secret Service agent came over and asked us for our names and our intentions. He was mostly interested in whether we were the first of a large group that was coming. We answered that we were part of no organization and just represented ourselves. We would welcome others, but didn't expect anyone. The Secret Service is only interested in situations that could provide cover for some threat, but the Park Service is responsible for enforcing the rules. There are a number of rules; such as sticks for holding signs must be no larger than three-quarter-inch square, people in the middle section of the sidewalk must keep moving and no permit is needed for less than 25 people. We try to be there for a few hours each weekend, we think it's important that there be an ongoing witness about the continuing carnage from guns.

One day a person left a backpack on the sidewalk and couldn't be found. The Secret Service moved into action quickly and cleared the sidewalk, Pennsylvania Ave and all of Lafayette Park. After about 40 minutes, we were allowed back and it was as if nothing had happened. We learned how to be efficient as one does in any continuing activity. We know where to park, how to dress and how to clip the smaller signs to our banner sticks to hold them off the ground in accordance with the rules.