Guns and inner cities are like lost relatives, each linked by blood, each unknown to the other.

On the surface, gun owners care about freedom, the Second Amendment, etc. But behind this is something else.

To understand, you need to see the subtext of this issue with our cities.

"Inner city" is a euphemism for the poor, the black, the sub-par, the lack in our society -- from the dysfunction of non-working schools to the violence of broken families, crimes, drugs, gangs.

In certain parts of Chicago, as Rev. Jesse Jackson was telling me in a recent interview, "Fear is creating a sanctuary for killers."

This was on the heels of the death of Hadiya Pendleton, the young girl who performed at the president's inauguration, only to be killed just days later by gunfire back home in Chicago.

So what is life really like in the inner city?

If you'd ask Jackson, he'd touch on police corruption and the drug cartels and the fact that people are simply too afraid to stand up to this kind of violence.

I understand it in a strange sort of way. I stopped talking for a while when I was a kid. Now I know it was a result of violence, but then it was as if I couldn't bear the effort of speaking and I retreated to a place apart to watch the world. Everything was in slow motion, like driving in a car in the backseat and watching out the window. In the silence, I felt a kind of peace. People betray themselves with their speech. Actions, tics, mannerisms, all these things you see in silence. People say the opposite of what they mean very often, truth you hear in jokes. Later when I decided to talk again, the words came out rushing like water, so many thoughts stored up over time, I was almost vomiting the noise of myself. But that sense of knowing how to be quiet never left me, nor did the imprint from the trauma, even as I've done work on healing from it.

When I was living in Brooklyn, just before I left, I met perhaps the most frightening person I've ever seen. The first time I encountered him, he was asking me what was good on the menu, looking down and when he looked up -- I saw he had no eye. In place of an eye all was there was an empty space. Nothing there. The restaurant was new, a Filipino joint on my street that was a little too nice for the projects across the way, and I recommended the pancit canton. Another day that week, he was in the basement of our cavernous laundry room (think he'd just moved to town) the one that had water bugs (large roaches) and he came up to me and was asking new person stuff. But all I was thinking was we were alone and the vacancy of the eye -- the black hole staring at me. It was the strangest thing; it wasn't like my friend when I was a kid who had a shriveled up baby hand. It was no eye. If the eyes are the windows to the soul, to see a person with just an eye socket was like looking at someone with no soul. Total darkness. I don't know what I was expecting -- to see his brain, his skull? Had it been taken out or was he born this way? Why didn't he cover it up? Did he frighten children or just me? Did he feel alone? Deranged? The fluorescent white lights blinkered and the dryers and washers clanged along, and he disappeared.

In a way, that guy encapsulated how I felt about my neighborhood. I always sensed as if something hollowed out and deathly was looking back at me there. The children who lived in the projects abutting my street had this kind of desperation about them. Frequently there were gunshots (and talk of gunshots) from their apartments and actual dead people, like the guy my brother-in-law tried to help who was gunned down by the subway, the one I took to work. The girls looked like me -- brown skin, their hair cautiously wrapped in scarves against the cold -- but their faces were lined ahead of their years and their eyes were skeptical -- squinting, looking for injury before it happened, sure it would happen. The men were coarse -- in a genial kind of way -- assuming you were in need of a comment on your butt today or the lilt of your walk or reminding you of your need to smile.

We all shopped at the same crappy grocery and I watched the moms and the occasional dad load up on sodas and strange meat, light on the sub-par fruits and vegetables. The place smelled rotten. The food store, the liquor shop, the salon, the bodega, the restaurant, the dry cleaners in the vicinity -- none were black-owned, even though the community I was living in was majority black.

The elementary school that occasionally opened its doors to outsiders for public elections, was hermetically sealed most days, the windows wired shut, no view to anything from inside. The air was overnight bedroom stale.

How can anyone live here? When you're young and adventurous, it's exciting and cheap, but then I remember. I used to run. I understand now I ran to stay sane; I wasn't one of the prisoners. I ran because I wanted everyone to snap out of it. People there had it much better than my relatives back in Uganda -- electricity and free schools and yes, the cops were scoundrels but if you knew how to act, you could skate around them mostly.

Of course Brooklyn could be worse. Take Chicago: According to Rev. Jackson, whose group at Rainbow Push has been collecting publicly available data: "Last year, 129 of Chicago's 506 murders (about 25 percent) resulted in an arrest, leaving 377 cases unsolved," and "Almost 80 percent of nonfatal shootings in Chicago are not solved."

Further, his organization says: "A recent study showed that, between January 2009 and November 2011, there were 4,463 complaints of Chicago police officers using excessive force."

"Of the 140 officers named in more than one successful police misconduct suit (one in which the city paid damages), 80 percent are still on the job. In other words, even when cases are closed and the city pays, CPD does not remove officers with a history of violence."

This is not a recipe for life, liberty and the pursuit of happiness.

Back in Brooklyn, the trees in the park stand by a monument marking the bodies of the dead killed in the Revolutionary War, a crypt is buried somewhere deep in its base.

There is a woman named Grace who owns a dance and yoga studio called "Move with Grace" on Myrtle Avenue. Myrtle was known back in the day as Murder Myrtle for obvious reasons. Sometimes I imagine all the young people, all the lives haunting that place. Erased and yet marked like that man's eyeless face. And then I see Grace making a space for everyone to move and I know things can get better.

In Los Angeles, the County Supervisor, Mark Ridley-Thomas, sponsored a successful gun-buyback program in January. When I asked him why so many people hoard guns he says: "Put politely it's a very emotional response, put more bluntly, it's completely irrational."

But is this explanation adequate? What is the emotion driving the action?

I'm interviewing Jackson again, this time a week before the inauguration.

We're talking about crime in Oakland and he's saying: "There's a combination of race, drugs, guns and poverty that tend to marginalize the pain of blacks until it spills over."

In predictable fashion, the police have been asked to ramp up their efforts. Bill Bratton, the former LAPD Chief who gained some notoriety for being a proponent of Stop-and Frisk tactics, and who's been called in to consult the Oakland police department declined to comment for this article.

Part of me wants to both laugh and cry. I suspect there's an unspoken this truth between the Reverend Jackson and I. If the best response to poverty is "more police" -- then the inner cities have been given up.

The stories of black, brown or Asian youth gunned down in Oakland or Chicago or Queens or Atlanta or Bridgeport or Puerto Rico can be piled atop each other like bodies.

Perhaps we're nearing a point where one child of color will be equal to a white one gunned down -- anywhere.

Where do you go from here? Is it the job of the less-loved to teach the other to love more?

I don't know if you've tried this in a relationship but that's a tough one.

So how is this problem fixed?

Amy Wilentz, writes in Farewell, Fred Voodoo that do-gooder Westerners go to Haiti to save it in order to see if they can, in a sense, redeem themselves: "... all unconsciously hoping that in trying to save Haiti, they'll be able to save themselves, setting the scene for a future rescue of humanity."

If this logic holds true, then Americans need not look so far: regard your own cities and the everyday reality of the poor, the homeless and the incarcerated.

The gun owner wants to know that s/he can defend self at anytime for any cause... but what is s/he really afraid of? What is s/he fearful of? S/He doesn't know but s/he knows it's out there.

The sickness of our society is that the gun owner is correct. S/He is aware of a free-floating negativity that could attack at any time. But that negativity is self-made. It's similar to the culture's current obsession with The Walking Dead, where, as zombies do, people are infected and then become soulless - and have to be killed. But the ghouls keep coming for the living. This fear of "The Night of the Living Dead," is neurotic but understandable: We create a fantasy to cope with something that is real. We are all part of a society that has marginalized and dis-equalized a vast group of people -- who just might be coming for said gun owner. That's what's really the fear. Our unconscious knows. The gun owner is frantically aware of the inequality in our society; s/he is haunted and troubled by it.

Is the solution to get your gun -- or to stop the inequality?

The tragedy of Christopher Dorner, the black LAPD officer run amok, is that he was unable to find a peaceful way to resolve this conflict, the embedded inequality in our society. 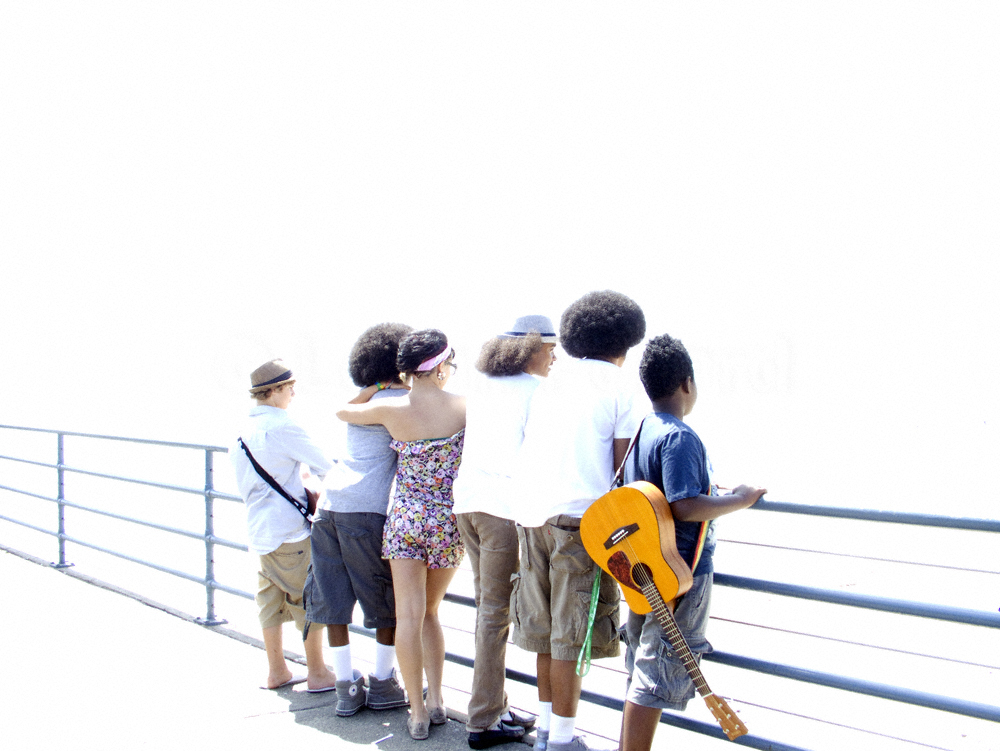 To learn more about the stats cited by Rainbow Push, visit: 1. Chicago Murder Clearance Rate Worst In More Than 2 Decades (2013)