In aftermath of Tucson, many are re-evaluating gun laws' position on the legislative backburner. A poll my firm, Momentum Analysis, released today suggests voters are ready for action. The poll was commissioned by Mayors Against Illegal Guns, and conducted jointly with Republican polling firm American Viewpoint (see more about the poll in Amanda Terkel's story here, Mayor's Bloomberg's take here, and the toplines here). First, there has been recent, post-Tucson movement in the number of voters who want to see stricter gun laws. Second, there has been consistent support--for years!--for enforcing existing laws, improving information-sharing between law enforcement, and closing gaps in background checks. Third, while Americans may be divided, generally, they are not as divided on actual gun laws as the media might have us believe. While support for the concept of stricter gun laws seems to be somewhat fluid, support for actual gun proposals up for debate is in fact more constant.


Most surveys on guns include a version of this Gallup question. Looking at both Gallup's past tracking, and other public polling, reveals a clear uptick in the last week. While support for stricter gun laws has been dropping for years, currently a majority say they support stricter laws. It's this highest this metric has been since 2008. And, still fewer than 1 in 10 Americans (7%) want laxer gun laws. 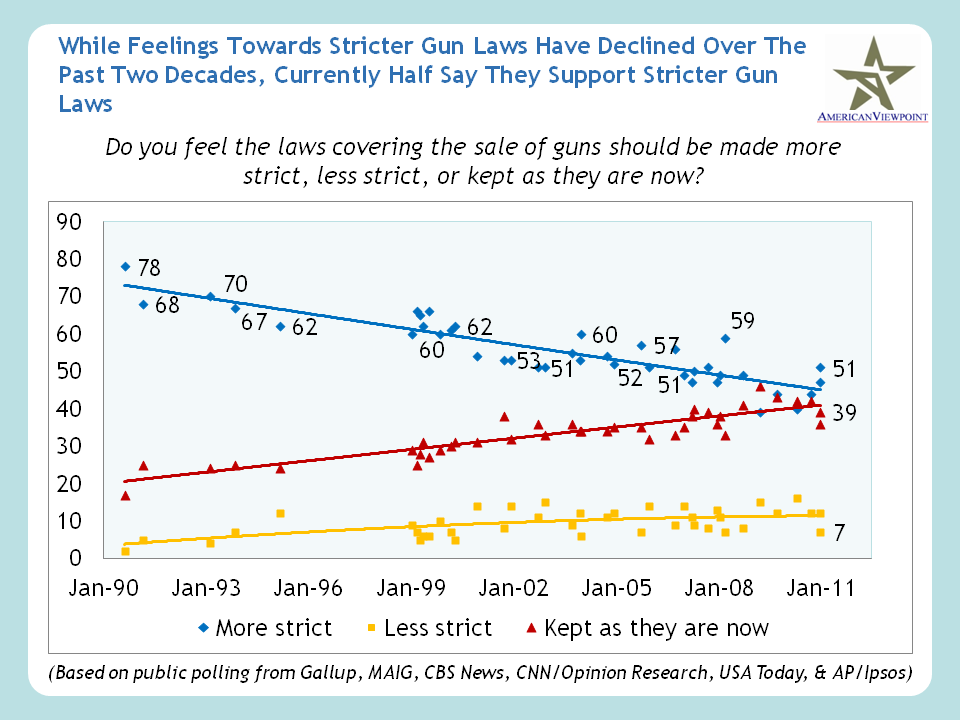 
While the question of whether to generally strengthen gun laws or keep them as they are is divisive, specific stricter gun laws are overwhelmingly popular. Many top proposals cover improving information sharing among law enforcement, and tightening existing laws. With such pervasive support, even gun owners want to see these changes made. The table below shows all the proposals tested in this current survey, overall, among gun owners, and across party lines. 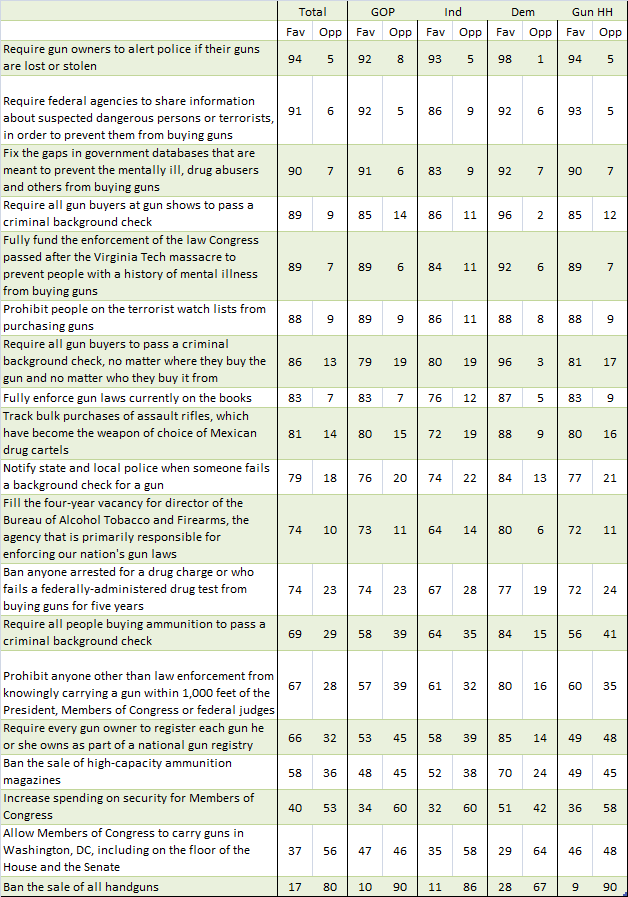 Specifically worth noting: 90% of Americans support fixing gaps in government databases meant to prevent the mentally ill, drug abusers and others from buying guns. Americans also want to see better background checks for gun purchases, no matter how they're described. More than eight in ten (86% of Americans, 81% of gun households) support background checks for all gun sales, regardless of seller or venue. Nearly all proposals are incredibly popular, aside from those on either end of the spectrum, such as banning all handguns, or allowing Members of Congress to carry guns on the floor.

Importantly, these results don't reflect a change in Americans' views. This 2008 GQR/Tarrance Group survey (also sponsored by Mayors Against Illegal Guns), came to a very similar conclusion. And this 2007 ABC News poll in the aftermath of the Virginia Tech shooting also showed overwhelming support for similar proposals.

Even some less popular gun proposals--like a ban on semi-automatic weapons--are more popular than "gun control" in the abstract. Huffington Post's Mark Blumenthal and ABC's Gary Langer note that here and here. This post-Tucson CNN poll also showed a series of specific proposals retaining their popularity.


To be sure, this electorate largely supports gun ownership. Almost half (45%) own guns, and 79% feel the Second Amendment is designed to protect all gun owners' rights, not just establish a National Guard. Yet Americans don't see keeping guns out of dangerous hands as mutually exclusive from protecting those rights. About half of the electorate overall (48%) and half of gun owners (52%) say we should both "protect Americans' constitutional right to own a gun" and "have effective laws preventing criminals, terrorists, drug abusers, and the mentally ill from having guns." In fact, more Americans, including Republicans and those in gun households, prioritize more effective laws over gun owners' rights. 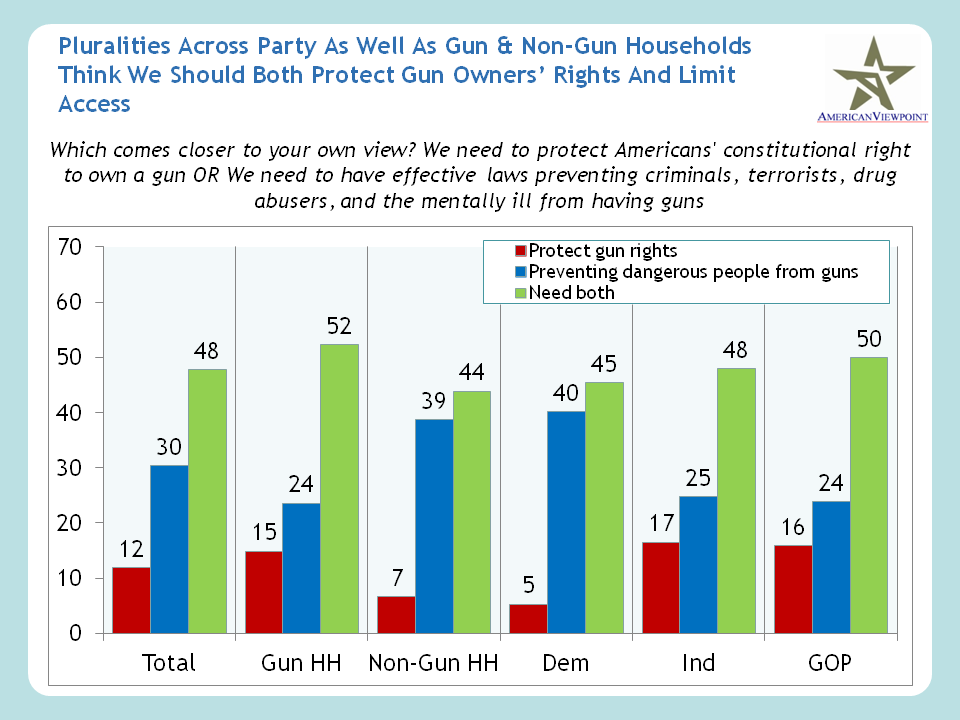 Voters are also largely optimistic this balance is possible. Three-fourths (74%) feel it is at least "somewhat possible" for government to juggle both of these priorities, with similar numbers (70%) of gun owners. 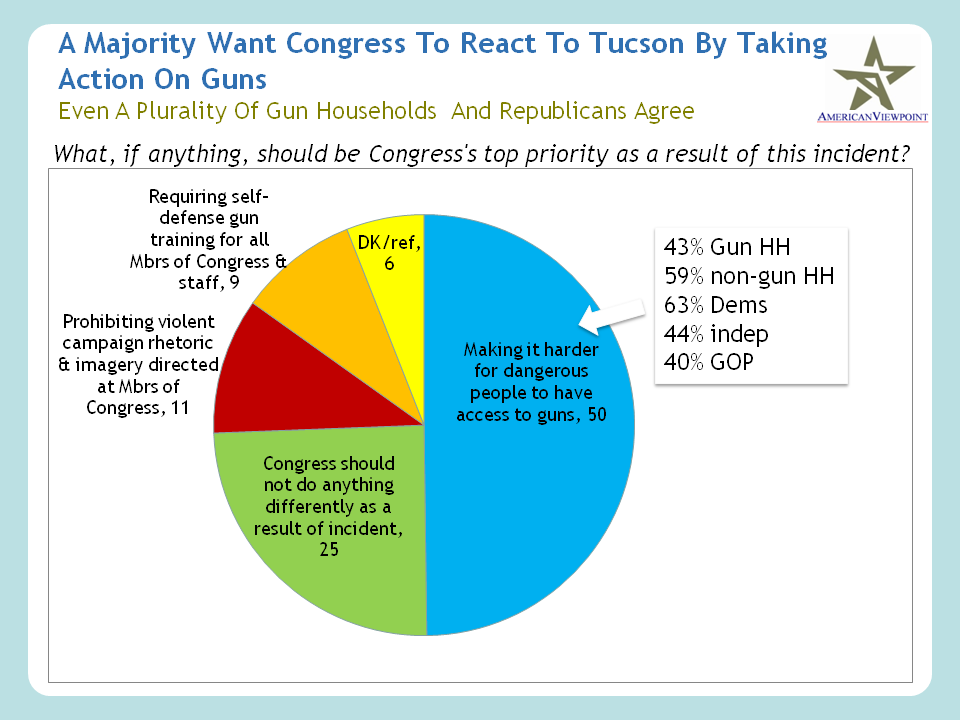 To achieve this balance, half (50%) say Congress should react to Tucson by making it harder for dangerous people to get guns, compared to a quarter (25%) who feel Congress should do nothing. A plurality of Republicans and those in gun households agree.


Post-Tucson polling reminds us of an important lesson on gun issues. "Stricter gun laws" are never quite as popular as the enumerated stricter gun laws themselves, which are typically incredibly popular. Yet polling that only scratches the surface of the gun debate is unlikely to uncover this consistent finding. While there has been some softening in support for gun control over the last few decades, there are many improvements to current laws Americans strongly support. Leaders looking to take action would be smart to show support for all of the following: gun owners' rights, keeping guns out of dangerous hands, and common-sense improvements to existing laws. In addition to being popular, this set of values is the right course to prevent tragedies like Tucson from recurring.