American gun sales have been climbing for nearly a decade, but they have surged under President Barack Obama -- particularly after the Newtown, Conn., school shooting in December 2012. According to FBI data, the number of firearm background checks has risen dramatically during the Obama era.

Background checks aren’t a perfect proxy for legal gun sales -- some firearms can be purchased without them, and not every background check results in a sale -- but the data are compelling, particularly given the financially extraordinary year that major gun manufacturers have enjoyed since the Newtown tragedy.

Sturm, Ruger & Co., the largest publicly traded gunmaker, saw its net sales for the first nine months of 2013 jump 44 percent to $506.4 million, from $350 million in the same period a year ago, according to Securities and Exchange Commission filings. The company’s profits for the first three quarters of the year surged 66 percent to $84.7 million, from $50.8 million over the same period last year. Its stock price has rocketed up about 60 percent since December 2012. 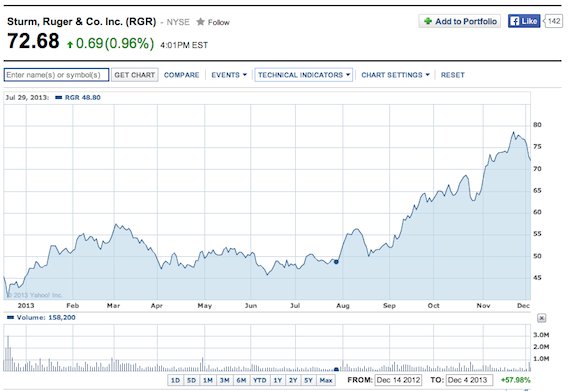 A similar, though less pronounced trend is evident for Smith & Wesson. From February through July this year -- the latest SEC figures due to the company's accounting schedule -- Smith & Wesson’s net sales climbed nearly one-third from the same period in 2012, and its profits jumped more than 70 percent. The company’s stock is up more than 25 percent since Newtown. 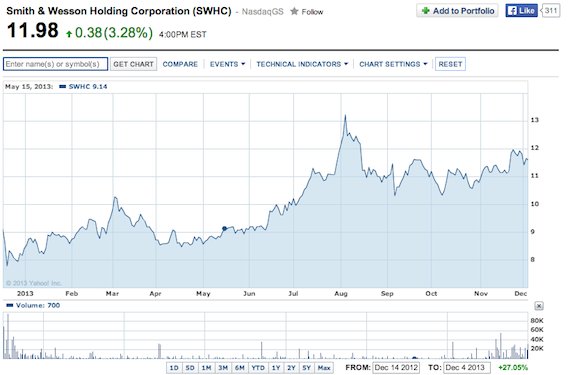 The stock market has generally performed well since December 2012, buoyed by the Federal Reserve’s quantitative easing programs and the slow but persistent economic recovery. The Dow Jones industrial average is up about 20 percent since Newtown, while the Standard & Poor's 500 index has climbed a bit over 25 percent.