Gun Shows are the equivalent of al Qaeda terrorists walking right onto the airplane while law abiding citizens wait in the TSA line!

At over 5,000 gun shows each year, in 32 States, criminals and terrorists are allowed to purchase firearms from private gun dealers without an ID or background check. Although many dealers at gun shows are federally licensed and therefore legally required to contact the National Instant Criminal Background Check System (NCIS) to ensure that a prospective purchaser is not prohibited from possessing firearms, private sellers have no such requirement. This dangerous "gun show loophole" has allowed criminals and terrorists to legally buy and sell guns in the US on a cash-and-carry, no-questions-asked basis for years. The following are just a few proven and frightening examples of how terrorists and criminals have bought guns undetected at US Gun Shows.

A manual titled, "How Can I Train Myself for Jihad" was found among the rubble at a training facility for a radical Pakistan-based Islamic terrorist organization. The manual contains a chapter on "Firearms Training" and singles out the US for its easy availability of firearms and states that al-Qaeda members in the US can "obtain an assault weapon legally, preferably AK-47 or variations". In Texas, Muhammad Asrar was arrested in an investigation of the Sept. 11 attacks. He pleaded guilty to immigration violations and illegal possession of ammunition. The Pakistani store owner said he had bought handguns, rifles and a submachine gun at gun shows since 1994. On September 10, 2001, just one day before the devastating attacks against the United States, Ali Boumelhem was convicted on a variety of weapons violations plus conspiracy to ship weapons to the terrorist organization Hezbollah in Lebanon. He and his brother Mohamed had purchased an arsenal of shotguns, hundreds of rounds of ammunition, flash suppressors and assault weapons parts from Michigan gun shows without undergoing background checks.

On April 20, 1999, in the deadliest High school shooting in United States history in Littleton Colorado, Eric Harris and Dylan Klebold procured two shotguns, an assault rifle and a TEC-9 assault pistol and shot 26 students, killing 13 of them before turning the guns on themselves. Subsequent investigation by the ATF found that all four of the weapons had been purchased from private sellers at gun shows. Some of the guns were purchased for the killers by their friend, Robyn Anderson. Later, Ms. Anderson would state publicly that, had she been required to undergo a background check at the gun show, she would not have purchased the guns for the teens. Branch Davidian cult leader David Koresh used Texas gun shows to make large gun purchases. According to an ATF arrest warrant, Koresh and his cult made "regular purchases of weapons and ammunition [from] flea markets and gun shows." In the end, authorities estimated that Koresh had at least 200 automatic and semi-automatic assault rifles stockpiled, plus thousands of rounds of ammunition. Finally Oklahoma City bomber, Timothy McVeigh, was a "Private Seller" at Gun Shows. He along with accomplice Michael Fortier, admitted to stealing $60,000 worth of shotguns, rifles and handguns from an Arkansas gun collector's ranch and then reselling the stolen weapons at gun shows.

It's just common sense that buyers and sellers at gun shows be required to abide by the same reasonable standards that law abiding gun buyers and the majority of Federally Licensed gun dealers comply with. It's not too much to ask that criminals and terrorists who have been known to exploit the "Gun Show Loophole" undergo criminal background checks and show ID's before they buy guns in the US. Both Presidential Candidates and the majority of Americans including gun owners support closing this dangerous loophole. It's time for Congress to act. 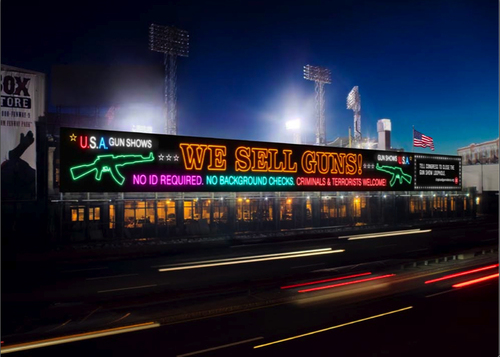 Stop Handgun Violence (www.stophandgunviolence.org), a non-profit organization dedicated to the prevention of gun violence, today unveiled its newest advertising campaign on the nation's largest billboard alongside the Massachusetts Turnpike in Boston. The 252-foot billboard displays a new powerful and provocative call-to-action message urging lawmakers to close the "gun show loophole" in federal gun laws that allows terrorists and criminals to purchase firearms at gun shows, "no questions asked," without a criminal background check or ID. The billboard, created by the Boston-based advertising agency Modernista, is designed as a mock gun show advertisement containing the message that highlights the ease and accessibility for individuals to legally buy guns in the U.S. without detection: "We Sell Guns! No ID Required. No Background Checks. Criminals and Terrorists Welcome!"

The billboard unveiling marks the beginning of a national public awareness campaign by Stop Handgun Violence that includes a grassroots initiative featuring "wild postings" of campaign fliers designed as mock yard sale advertisements and leafletting at the Democratic and Republican Conventions in Denver and Minneapolis.