I have never believed in the general practice of carrying weapons. I seldom carry one... I do not believe in the general promiscuous toting of guns. I think it should be sharply restricted and only under licenses -- Karl T. Frederick, president of the NRA testifying before Congress in 1934

Probably one of the weirdest hashtags in use today is #guncontrolbullies, coined by Open Carry, a loose affiliation of state organizations, which holds protests around the country at which zealots parade around with loaded firearms in public places. They use the Twitter hashtag to harass their nemesis, Moms Demand Action, formed after the Newtown tragedy and lead by Shannon Watts, a mom herself. The reason Open Carry leaders give for brandishing these weapons is to "educate" and "condition" the public to tolerate firearms, claiming that openly carrying loaded weapons is somehow normal behavior. Openly toting weapons is a radical notion, seldom practiced in the United States after we moved beyond expansion into the frontier in the 18th and 19th centuries, and would likely shock the Founders if they were around today to witness it.

So far, all these gun toters have seemed to accomplish is terrifying people and angering gun owners like me who believe that gun ownership is serious business that requires training and an extra level of responsible behavior, not less. In many instances during these demonstrations, frightened people, who have no idea what's going on, call the police to report a mob toting guns in public. Being alarmed at such a spectacle, of course, is normal, but only if you're not a gun toter, who actually believes that a complete stranger can somehow divide between him (the good guy) and a mass murderer (the bad guy), though they look identical. To make matters worse, gun toters are an intolerant lot who display a shocking lack of respect for anyone who disagrees with them, publicly taunting (and sometimes threatening) anyone who criticizes or even questions the wisdom of their actions.

A bunch of guys usually dressed like they just fell out of bed with their loaded AR-15s will get most people's attention, and not in a good way. Their reaction when some terrified person calls 911? They retaliate. By using open records laws to get recordings of the calls, they publicize the name and phone number of the caller, and in a few instances post the recording on YouTube. They also take to other social media, using the aforementioned hashtag to criticize callers and "make them afraid of calling into 911." So, in their alternative dimension, the guy toting a loaded AR-15 is the victim, and the terrified mom is the bully deserving of threats and intimidation. Only in Open Carry World is gangland behavior considered anything more than despicable, if not outright illegal. Below is an example of the kind of language gun extremists use publicly on social media: 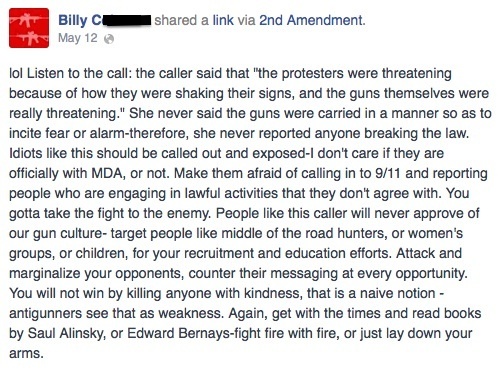 Gun cultists make the oft repeated, but false pronouncement that more guns equal more safety, when no objective study on the planet has ever shown that. They never stop to think about how ridiculous the notion even is; with almost one gun in circulation for every living American, we should be the safest society on the planet, but we're not. All of these cultists also believe in a non-historic interpretation of the Second Amendment that says the right to bear arms means any weapon, any place, anytime, by anybody for any purpose. Training, location, mental health or criminal record, in the minds of these advocates, is irrelevant. The only thing that matters to them is that they want the right to carry any weapon they care to regardless of social norms or common sense. Civility and common courtesy also play no role in their behavior.

The controversy over gun toting began coming to a head last month in the Fort Worth-Dallas area when a frightened mother called the local police to report that she saw what turned out to be a bunch of Open Carry Texas (OCT) members parading around with loaded weapons and waving flags and signs. Of course, the police showed up, the protest fortunately ended peacefully and everyone went on their merry way. That is, until a guy named Brett Sanders obtained a recording of the police call from the frightened woman and promptly posted the entire recording on his YouTube channel including the caller's identification and her telephone number. What ensued is what you would expect, with threatening phone calls, including death threats, ending only when she changed her phone number. Oh, and by the way, the police are asking people to call anytime they see someone in public carrying a gun.

When I heard of this incident, I started looking into the issue myself, and perused the OCT website and their Facebook page. Most of it is the normal absolutist gun language with lots of gun pics and Founders' quotes, etc., etc. I posted a review of the page myself and stated that as a gun owner I strongly disagreed with the notion of toting weapons in public. I then asked the obvious question about how we can tell the difference between an open carry advocate and a mass murderer. Not surprisingly, most users on the page didn't like that question, and the normal hide-behind-a-fake-ID tirade ensued with its garden-variety profanity and refusal to answer the question. One user, using the fake name Daniels McJack, demanded that I remove the post. (Like most people, I post on Facebook using my real name.) I insisted that he answer the question. He then started posting what he thought was personal information about me including an address and phone number, along with a winking emoticon. The message was clear that his posting of private information was intended as a threat. I copied the thread for the record, then deleted it from the site. A while later the same user celebrated on another thread that he "got me kicked off Facebook". As I looked over the other threads, sure enough, there he was posting the address of someone else with whom he disagreed. So, OCT allows users to post personal information about anyone they don't like to intimidate them into silence. Nice. Below is the end of the thread from Facebook. I've redacted the profanity and the telephone number the user posted. 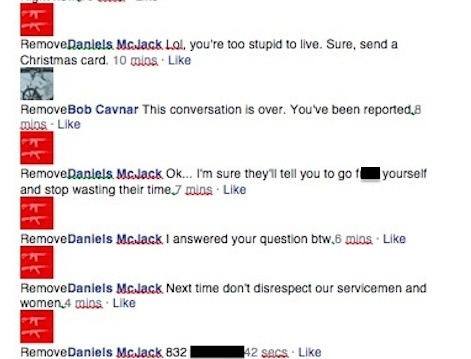 Oh, you noticed the virtually identical avatars and language for both users? Me, too. It's a pretty common avatar that gun toters use, and some more aggressive users often post under fake names to avoid being identified. So, here is an organization that is supposedly all about "liberty" and personal freedoms engaging in (or at least enabling), mob-style threats and intimidation to advance their cause.

I wanted to find out if Open Carry Texas actually supported this kind of behavior, so I emailed CJ Grisham, the president, through their website and on Facebook asking if he or a representative would talk to me. I received no replies. I emailed Brett Sanders, who had posted the original video of the police call, and he referred me to OCT's statement on the matter (which has since been removed from their Facebook page), defending himself that he posted the video because the caller had put himself and his fellow demonstrators in a "potentially dangerous situation by making false statements to police." I listened to the tape several times, and she stated the facts pretty clearly. Brett refused to answer the question as to his purpose for posting the video in the first place. I'm not going to post the link here, but you can find it if you look.

I did succeed in getting Grisham to engage on Twitter, believe it or not, where he used similar tactics, dodging and obfuscation, refusing to state if he actually supported publicizing people's personal information, only saying that he "supports free men engaging in legal activities." A local leader of OCT chapter in Hood County, Texas did jump into the conversation, stating that the caller's personal information was made public because the caller "broke the law". He had no answer when I asked why, if a law was broken, why he didn't call the police himself. It's clear by my own experience that their posting of personal information had nothing to do with anyone "breaking the law" or "making false statements to police". It's about intimidation, plain and simple.

The irony of this whole sorry story is that OCT has already won. Texas is in the hands of politicians who either pander to, or actually believe, the nonsense that gun toters spout, and are certain to pass legislation to allow the unregulated carry of loaded assault weapons and handguns in public. All the major candidates support it, even Wendy Davis, the Democrat running for governor. The real shame is that the political battle for civility has been lost in Texas and these strong-arm tactics of Open Carry Texas are completely unnecessary, yet commonplace. Gun toters, usually young and immature, get off on parading around with weapons because it makes them feel powerful, not because they actually believe they're changing anyone's mind. In fact, I believe every time they hold one of these demonstrations, it hurts their case. Threats and intimidation against innocent citizens damage their cause even more, and certainly cause gun owners like me to raise our voices to strongly disagree with their behavior and efforts.

The notion of openly toting load weapons in public is radical, if not stupid. There's no objective reason for it, and the Second Amendment is no weaker without it. Even worse is the notion of lifting all training and licensing requirements to carry these weapons. Gun deaths will certainly go up because more guns equal more death, all the time, every time, especially with a lack of background checks and training. However, I believe this is yet another lesson that we'll learn the hard way.