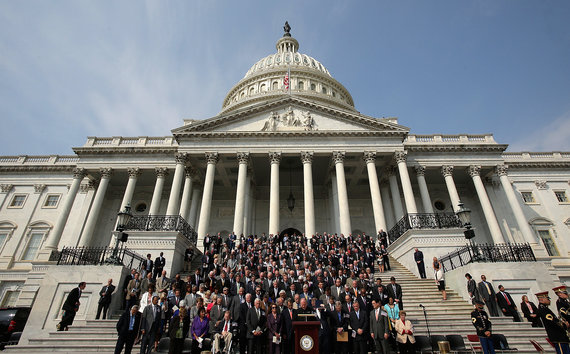 There was a time when mass shootings shook our nation to its core, and our elected leaders would find a way to address the unthinkable. They would struggle to get it right, but ultimately they would act.

It happened in 1934 with Roosevelt's "New Deal for Crime." It happened again 46 years ago when high profile assassinations resulted in the Gun Control Act of 1968. And it happened in 1993, despite the NRA's intense opposition, with the passage of the Brady Handgun Violence Program.

Today, the heavy hand of America's gun lobby has paralyzed Washington, and Congress appears anesthetized to these bloody rampages.

As a mom of three, a former prosecutor and new member of Congress, I'm not willing to accept this as our new status quo.

War. Leukemia. Breast cancer. Those who lose a family member to one of these afflictions will endure an unspeakable pain, but many will also take solace in knowing their family member protected our country, inspired our communities to find a cure or create better policies. This is not the case for the families of victims of gun violence. For them, progress has been stalemated by the corrosive influence of special interests and the politics of cynicism. Today, the answer we hear from Washington when it comes to gun violence is that nothing can be done.

There is a way to end that cynicism. We have to remember and listen and act.

We should listen to the anguished plea for action by Richard Martinez whose son Christopher was killed in Santa Barbara. We should listen to Congresswoman Giffords, who in the midst of her recovery was able to muster the strength to admonish Congress, "Be Bold. Be Courageous. Americans are counting on you."

Congress should listen to the broad consensus of Americans who believe more can and must be done to end gun violence.

I applaud the members of the Commonwealth's legislature for doing just that. Speaker DeLeo has poised the Massachusetts legislature to pass the most comprehensive gun laws in the country. But states cannot do this alone. Congress needs to act.

There are common sense proposals on the table that respect the rights of lawful gun owners while providing effective measures to improve gun safety and save lives. The public agrees that reasonable legislation, like closing the gun show loophole and expanding background checks, should become law. But instead of debate and discussion, these proposals are met with preternatural silence in the halls of the Capitol.

More than 30,000 Americans die from gunshot wounds every year, and each time Congress abdicates its responsibility to reduce this gruesome tally, we risk more violence. We risk forgetting that our nation is built and made stronger by tough decisions and weakened when we put the deep pockets of special interests ahead of our children and families.

In 1993, the NRA fought Congress with a $2 million war chest to prevent them from passing the Brady Bill. They fought, but America's perseverance and practicality won. Twenty years later, the NRA's political influence is once again at odds with public opinion. This time the war chest is ten times bigger and they're placing a bet that their money is louder than the voice of the American people.

In the six months I have served in Congress, the House has paused on several occasions to solemnly honor recent victims of shootings with a moment of silence. However, if we are to truly honor those we have lost to gun violence, it is time for Congress to end its silence.