One of the sad realities of gun violence in America is that some groups of people bear the brunt of this epidemic more than others. One of these groups is Hispanics. New research by my organization, the Violence Policy Center, finds that fatal gun violence has a disproportionate impact on the Hispanic community.

Our study, Hispanic Victims of Lethal Firearms Violence in the United States, is now in its second year. It is based on the most recent available data from the federal Centers for Disease Control and Prevention (CDC) as well as the Federal Bureau of Investigation's (FBI) Supplementary Homicide Report. The report is available in English and Spanish.

Guns were used in more than two-thirds of the homicides where the victims were Hispanic. Seventy-two percent of Hispanic gun homicide victims were killed with a handgun. 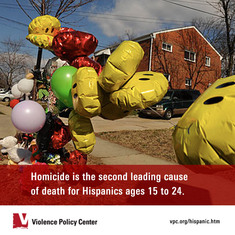 These are eye-opening facts about a significant portion of our citizenry that are all too often neglected in our national awareness about gun violence. Yet at the same time, we found there are major gaps in the data. Government agencies often report information on race, but not on ethnic origin. Because of these limitations in the way data is collected, the total number of Hispanic victims is almost certainly higher than the reported numbers suggest.

That's why we are recommending that government agencies improve their collection and reporting of data on Hispanic victims of gun violence and other lethal violence, so that policymakers can better understand this problem and take long-overdue steps to address it.

Additional findings of the study include:

• In 2013, the most recent year for which data is available, 2,951 Hispanics were killed with guns. That year, 1,750 Hispanics died in gun homicides, 1,034 died in gun suicides, 49 died in unintentional shootings, and 118 died in other circumstances, including legal intervention and undetermined intent.

Across the nation, community leaders are already working tirelessly to stop gun violence in the Hispanic community. These people deserve our continued recognition and support. However, we also learned from our study that we don't have nearly enough data to obtain a complete picture of the problem. That's why government agencies urgently need to improve their collection of information about gun violence among Hispanics. Fully understanding the scope of this crisis is the first step toward ending it.