Rajani Venkatraman Levis, MFT is an immigrant therapist of Color who speaks five languages and artfully navigates the intersections of trauma with race, class, ethnicity and other facets of diversity in her writing, teaching and psychotherapy practice. She is a California Licensed Marriage & Family Therapist, a Certified Trauma Specialist and an EMDRIA Approved Consultant in EMDR.

Traci Ruble, MFT is a California Licensed Marriage and Family Therapist, founder of Psyched in San Francisco and Co-Creator of Sidewalk Talk Community Listening Project. She specializes in working with couples, individuals who struggle in relationships and adult family members working on reconciliation. As a former tech professional, she works with many tech executives.

Dr. Robert Solley, PhD earned his Ph.D. in 1988 and has been a California licensed therapist over 20 years. He specializes in couples therapy and has a private therapy practice in Noe Valley in San Francisco. He is also a staff therapist at Psyched in San Francisco Psychotherapy Center. 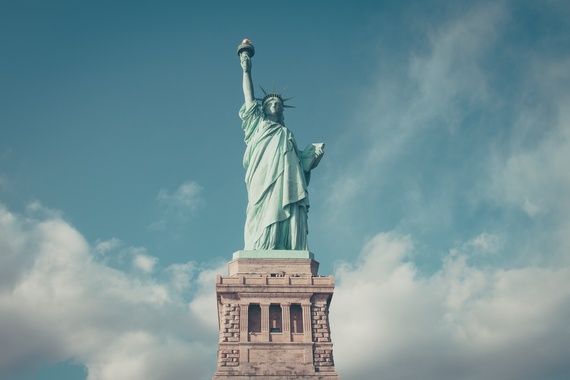 "Us vs. Them" is the poison this American culture is pumping out and ingesting on every level of our society and we are all ill from it. The longing to belong is wired into our cells, yet on multiple levels of our society we actively leave people out. By denying some citizens basic safety and care and actively persecuting others, we foster the cognitive openings for acting on impulsive violence. The easy access to guns makes this social sickness easy to act upon. Racism, discriminatory economics, unrepresentative politics, media violence and lack of empathy are the ingredients for this culture of violence that is now a national health epidemic.

Here are some interesting data that show not only is the "us" vs. "them" mentality growing but how it correlates to the increase in gun violence as well. Moreover, the knee-jerk assumptions promoted by pundits and hopeful politicians are clearly based on untruths. Pundits' promotion of these assumptions in the public sphere of the media is yet another form of violence, through "othering."

Because otherness is built into the racist and classist structures of our social, economic and political system we are blind. We point to the violence in our society as being "out there" with those immigrants or that religious group rather than "right here" with us. When was the last time you made someone a "them"? What about Johnny, the "bad boy" in your kid's class? Or Sally, the shy woman at work? Or Greg, your Muslim neighbor? Police brutality of Black citizens is now out in the open for all to see. We are sorting youth into good and bad very early and kicking them out of school if they mess up a school's performance stats. Often this is the beginning of a long relationship with the justice system that hems them into a world of otherness. And in that justice system African-Americans and Hispanic Americans account for 58 percent of the prison population but only 25 percent of our overall population. White men are responsible for most of the mass shootings in the US but after each mass shooting we put the Muslim and immigrant community on public trial in the media. And did you know that most gun violence is preventable in this country, but it is mostly happening in the same poor neighborhoods of color?

We are fostering violence by sending the message that you don't deserve basic care and safety. This is not new to people who have lived as "the other" for decades in this country. But it is radically new to many white middle-class families whose voice is increasingly muted by the wealth and political weight of the 1 percent. Middle class "otherness" is a radical new ingredient in American culture and it is largely these new "others" that are shooting up movie theaters and schools. Why? We know from the research conducted by the Avielle Foundation that the environmental inputs necessary for developing a "healthy brain" as they term it include; A healthy family, social / peer support, nurturing, good nutrition, personal safety, exercise, and educational (non-violent) media ("Brain Health", 2015). These healthy inputs have not been on offer for decades in poor neighborhoods of color, but now they are not on offer to larger numbers of white middle-class Americans. Beyond the ivory tower of the 1 percent, more Americans are living with the kind of neglect that is breeding violence, and yet middle-class folks protect themselves by a familiar pattern of dehumanizing people that are different, shooting them up in a movie theater or marching to the drum beat of a xenophobic presidential hopeful.

1. Challenge your judgments
Marshall Rosenberg, the creator of Nonviolent Communication, believes that violence starts with what he calls "moralizing judgments" about oneself or others. These are beliefs that people "should be" a certain way and that there are absolute rights and wrongs. This perpetuates the "us" vs. "them" mentality and is at the root of an economic, political and social system that keeps leaving people out. We protect our self-worth by dehumanizing people that are different from us.

2. Actively practice inclusion
We bond with those that we identify with--through shared values--and we build walls (or worse) against those whose values we perceive as different. The basic stance is: my needs are more important than yours, you are of lesser value than I am, and, therefore, I am justified in treating you however I like, to get my needs met."

According to a 2013 Reuters poll, about 40 percent of white Americans and about 25 percent of non-white Americans are surrounded exclusively by friends of their race. In a country that prides itself on being a melting pot, we still haven't crossed racial lines. We need to get honest about this.

Look around you: Who is the "them" in a world where you are the "us?" The surest way to end the polarization is to include "them" in our embrace as we expand our definition of "us" to include the awkward teenager, your Sikh taxi driver, Pakistani waiter or Arab neighbor.

Imagine if your mother/brother/daughter were treated the way Blacks or Muslims or Arabs are currently treated in this country. Ask yourself: "Am I the sort of person a Black/Muslim/Arab individual would feel comfortable choosing as a friend?" This question draws inspiration from Tanner Colby's CNN article "Why don't White people have Black friends?" (2013, August 19).

3. Commit to acts of loving kindness everyday
Begin with cultivating loving-kindness for yourself and extend it outward to include loved ones, acquaintances, difficult people and then the whole world. You can sit down in a chair, close your eyes and practice this as a prayer. Next, consider smiling and saying hello to people you would normally avoid eye contact with and notice what happens. When you notice yourself forming a judgment about someone, wish them loving kindness instead.

4. Turn off the news and regulate your nervous system
In his well-researched and critically acclaimed Polyvagal Theory, researcher Stephen Porges highlights how friendly and loving personal interactions can trigger calm physiological states that contribute to health, healing and growth processes. On the other hand, there is long-term negative physical and emotional effects of feeling unsafe or of constantly being perceived as unsafe or as the "them."

Engage in personal and social interactions that enhance your sense of calm and well-being. Allow yourself to step away from listening to or participating in conversations that reinforce feelings of unsafety. This may mean regulating your intake of news or media that promotes a strong "us versus them" ideology.

5. Seek Joy
Noted author and Jungian analyst Robert Johnson wrote of our struggle to experience joy in his book called "Ecstasy: Understanding the Psychology of Joy." Far removed from the pill of the same name, what Johnson was speaking of, was the need for experiences that allow us to touch the irrational and profound wisdom of our senses so that we can experience joy sans drugs, alcohol, technological devices or a plethora of toys or material enhancements. Johnson explained our societal addiction to violence as the unhealthy opposite of the same archetypal energy of ecstasy but in a dehumanized and explosive fashion. I'd like to believe that when our children are raised in a world with more joy, they will find it much easier to connect with this vital source of energy, rather than its shadow side that surfaces as bloodlust.

Give yourself permission to play, to seek joy and connect to a vital source of energy, which when, thwarted, emerges as violence. One of the ways we can care for ourselves and each other is by seeking joy for ourselves and providing outlets for joy and play in our communities. Go outside, laugh, sing, draw, create, move, shake, drum, cook, smell, taste, feel and engage with what brings you joy. Even if this is not the entire answer, it certainly can't hurt! 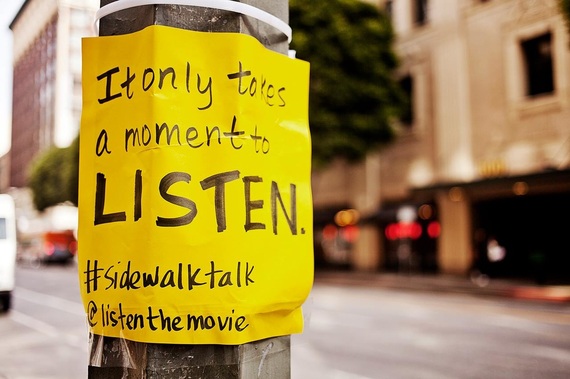 6. Get active. Volunteer, Donate, Join, Lead.
Psyched in San Francisco started a listening project called Sidewalk Talk in May of 2015 after the mass shootings, police brutality and mental health stigma were visibly rising. It started with 28 therapists who sat out on street corners to listen for free but now the idea is spreading all over the country with all different kinds of volunteers and in all different settings. You can volunteer, donate or learn more about starting your own Sidewalk Talk in your city or school here.

Contact your local political representatives. Give voice to your concerns about some of the data presented here or data we didn't cover.

Explore your own bias around race. Join and donate to groups like Coming To The Table,The White Privilege Conference, The World Trust.

We are in a very trying time but in trying times, miracles can happen. Miracles, however, do not materialize out of thin air. Miracles happen when people rise up together and get active in large and small ways. We can turn this great tide of systemic "otherness" and create the fertile soil for love again, but we all have to pitch in. The journey is both inner and outer and the road may be treacherous at times and joyful at others. Are you ready?

Dennis, B. (2015, October 2). Why we should think of gun violence as a disease, and study it accordingly. Retrieved December 11, 2015, from https://www.washingtonpost.com/news/to-your-health/wp/2015/10/02/why-we-should-think-of-gun-violence-as-a-disease-and-study-it-accordingly/

Greenemeier, L. (2011, January 12). What Causes Someone to Act on Violent Impulses and Commit Murder? Retrieved December 11, 2015, from http://www.scientificamerican.com/article/anger-management-self-control/