In many states, it takes longer to get an abortion than it does to purchase a gun. Twenty-six states require women to wait for an abortion, usually 24 hours after an initial counseling session — making the procedure more drawn out for everyone and less accessible to people who live in rural areas or have to take time off of work. Several of these states do not waive the waiting period in cases of rape. And in all but two of the states that mandate waiting periods for abortions, there is no wait at all to purchase a firearm.

The federal government protects both the right to bear arms and the right to have an abortion, but barriers to exercising these rights often depend on whether a state is controlled by Democrats or Republicans. 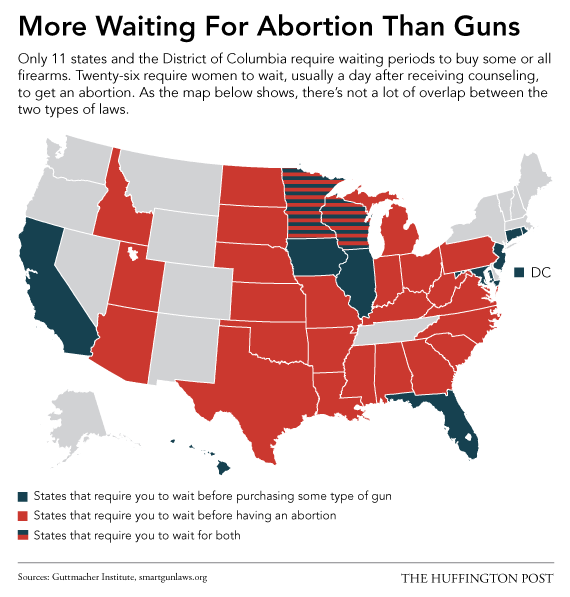 Studies have shown that waiting periods for abortions do not change women's decisions to go through with the procedure, and they cause "excessive" emotional and financial hardships. Waiting periods for guns are intended to allow for a "cooling off" period and to provide time for background checks, which were not extended to cover private sales after a background check compromise was blocked by the Senate in April.

It's hard to predict the impact of waiting periods in an unevenly regulated gun market, but the waiting periods imposed by the Brady Act in 1994 were linked to a drop in gun suicides, which now outnumber gun homicides in the U.S.

Friday marks the six-month anniversary of the Sandy Hook Elementary School shooting in Newtown, Conn., and gun control advocates have renewed their efforts for stricter legislation this week. Senate Majority Leader Harry Reid (D-Nev.) urged Congress Thursday to pick up gun control legislation again, citing his father's 1972 suicide. It was a plea he has made before.

"In Nevada, if you purchase a handgun you have to wait three days to pick it up," Reid said on the Senate floor in April. "And it's believed that alone has saved the lives of many people. Sometimes people in a fit of passion will purchase a handgun to do bad things with it, Mr. President, even as my dad did, killed himself. Waiting a few days helps."