President Obama's signing of a bill granting the federal Food and Drug Administration (FDA) regulatory authority over the tobacco industry now leaves the gun industry as the last American industry not regulated for health and safety.

Let me repeat. Guns are now the only consumer product manufactured in America not regulated by a federal agency for health and safety.

Household consumer products (except for guns and ammunition) are regulated by the Consumer Product Safety Commission (CPSC).

Food, drugs -- and now tobacco? The Food and Drug Administration.

Health and safety regulatory powers commonly include the authority to set design standards, recall dangerous or defective products, and require reporting from manufacturers.

The Bureau of Alcohol, Tobacco, Firearms and Explosives (ATF), the default "regulator" of guns in our nation, has no such powers. ATF is currently empowered only to oversee commerce in guns.

The bottom line is that under federal law, if you make a gun that is 50 caliber or less, is not fully automatic, and (in the case of long guns) meets specific barrel length requirements, manufacturers are free to make what sells -- even if the market is U.S. street gangs or Mexican drug trafficking organizations.

If the gun happens to blow up in a consumer's hand or go off when you drop it (e.g., the Ruger Blackhawk) because of a manufacturing defect, don't count on ATF recalling it. They can't.

If a manufacturer develops a handgun for the civilian market that can pierce the bullet-resistent vests worn by law enforcement (e.g., the Smith & Wesson Model 500 50 caliber revolver) or down an aircraft on take-off or landing (e.g., the Barrett 50 BMG sniper rifle as seen below) there's nothing ATF can do about it. 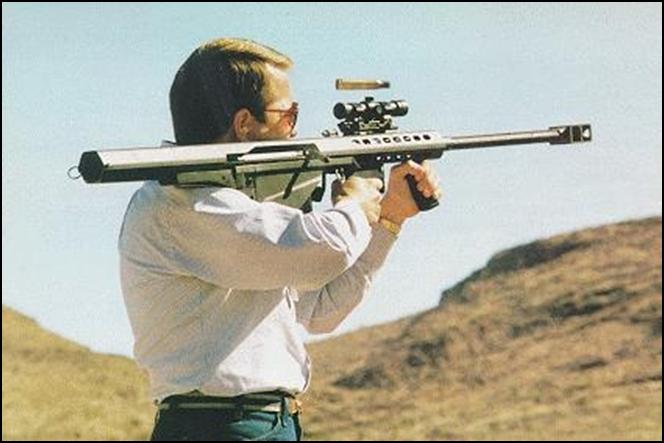 When presented with guns' unique niche in the pantheon of consumer products, the industry and its cheerleaders like the National Rifle Association (NRA) and the National Shooting Sports Foundation (NSSF) go into a well-practiced spiel of how in fact they're actually the most regulated industry in America -- citing dealer and manufacturer licensing, the minimal paperwork necessary to buy a gun under federal law, the Brady background check all buyers must go through to purchase a weapon from a licensed dealer, and the fact that ATF is allowed to check a dealer's sales records once a year (a privilege the agency has the manpower to employ on a far less frequent basis). Yet these are sales standards, not product safety standards. ATF lacks any of the health and safety authority that is routinely granted -- and usually expected by the American public -- for other consumer products. Imagine if there were no FAA and National Transportation Safety Board (NTSB) to oversee air safety. Would the public tolerate it if 100 Boeing 777s crashed every year? Of course not. But that would result in the same loss of life as the 30,000 Americans who are killed year in and and year out by guns.

In fact, the arguments the gun industry makes today to fend off meaningful regulation mirror those made in the past made by another industry "regulated" by ATF -- yes, the tobacco industry. If ATF authority over a given product equaled true health and safety regulation, there wouldn't have been a need for the bill signed today.

And as the gun industry continues to exploit its unique status with increasingly lethal military style weapons for the civilian market, this disparity can only become more evident.