I wrote about my grandparents and their time working in the state mental hospital in Toledo, Ohio when I was a child. The stories were sad, especially the children's stories.

It was the '50's and many of the mental illnesses we now have a name for were nameless and frightening. Parents were unable to care for children who couldn't get along in school and needed supervision. Many of those children were just left at the state hospital.

What concerns me more today is how we are very aware of the mental illnesses that permeate our society and yet we have fewer safe places for those who suffer them to go.

Schizophrenia, as well as many other forms of mental illness, is not alcoholism or drug abuse. Thirty days in a rehab facility is not going to make a difference. It's also important for someone to monitor medications for someone with a mental condition. How can that happen without supervision? 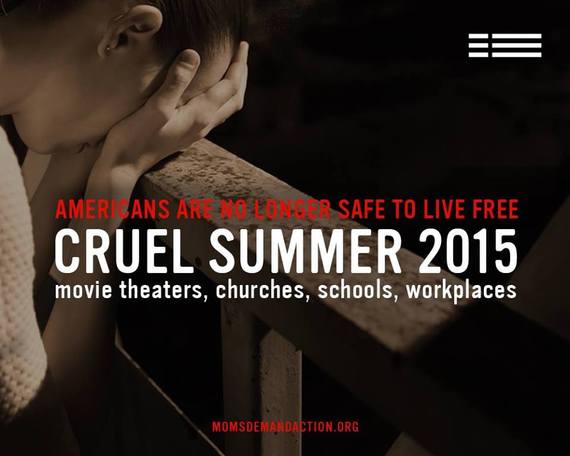 I don't have a lot of answers but until we can get a handle on how to help those with mental health issues there needs to be more controls on gun purchases.

Our gun culture has become insane compared to the rest of the world. Moms Demand Action for Gun Sense in America is a great group to join and follow if you want to get involved and make a difference. Power in numbers, I say.

The NRA, which owns a majority of our representation in Washington D.C., is out of control. They are fully aware of the issues with background checks and continue to push for less stringent regulations. All the while admitting mental illness is a huge issue with our out of control senseless murder rate.

So many places in our country have open carry now it scares me to death. If I walked into a store and saw someone walking around with an assault rifle over their shoulder, and likely wearing some kind of flag shirt, I would leave immediately. Of course, their answer to sane pleas for gun sense is to arm everyone.

Other than shooting a bb gun when I was a child, I've never touched a real gun and never want to. The idea of turning our country into the Wild West of a hundred years ago is insane. Even then in Dodge, Kansas you had to check your gun at the door.

I worry about those who really seem to believe that's a solution. Arm the whole damn country! Arrgh! They're nuts! With guns!

If most of the folks running for President of the United States of America focused on getting common sense gun regulations instead of trying to control women's reproductive rights we would all be much safer, including the fetuses they don't want aborted because, they will likely end up dead in a school or church or movie theater anyway.

The only way to make that happen is to write, write, and write to every representative in and from your state and demand common sense regulations for gun purchases. Not just once, daily if necessary until we are heard.

You can make copies of your letters and send them through the mail daily, or you can find your representatives email here and email them at least once daily. Think power in numbers! Lip service is not going to work any longer. Collectively we may not be able to match them with $$ but we can make sure our voices are heard and they know we are going to VOTE!

Once we get a sane government, perhaps, we can finally make a difference. It won't happen overnight, but we CAN make it happen.