"If you are fearful, arm yourself."

That was Pike County Sheriff Charles Reader's advice to Ohio residents in the wake of a series of "execution"-style killings that left eight members of a family dead at four different homes in Southern Ohio last week. Attorney General Mike DeWine described the shootings as "a sophisticated operation" amidst news reports that marijuana "grow operations" were found at three of the four homes, although it's not known whether the murders were linked to the drug activities. The shooting was the 23rd mass shooting (three victims or more as defined by federal law) so far this year.

Sheriff Reader's advice may warm the cold heart of the National Rifle Association and its financial partners in the gun industry which claim that guns are used up to 2.5 million times a year in self-defense. Yet the truth is that guns are rarely used to stop crimes or kill criminals. 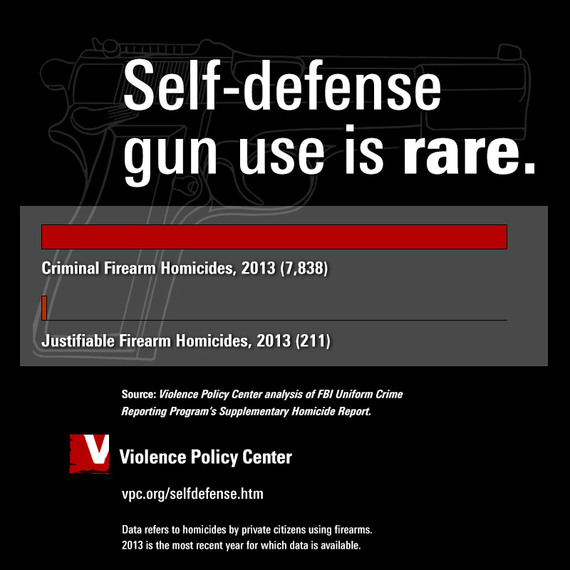 According to the latest federal data available, as detailed in Firearm Justifiable Homicides and Non-Fatal Self-Defense Gun Use, a report issued last week by my organization, the Violence Policy Center, private citizens use guns to harm themselves or others far more often than to kill in self-defense.

The study finds that in 2013, the most recent year for which data is available, there were only 211 justifiable homicides involving a private citizen using a firearm reported to the SHR. That year, there were 7,838 reported criminal firearm homicides. Using these numbers, in 2013, for every justifiable homicide in the United States involving a gun, guns were used in 37 criminal homicides. This ratio does not even take into account the tens of thousands of lives needlessly lost in gun suicides and unintentional shootings that year.

The study also finds only a tiny fraction of the intended victims of violent crime or property crime employ guns for self-defense. According to the federal government's National Crime Victimization Survey (NCVS), over the three-year period from 2012 to 2014, less than one percent of victims of attempted or completed violent crimes used a firearm, and only 0.2 percent of victims of attempted or completed property crimes used a firearm:

For each of these categories, it is not known what type of firearm was used, whether it was fired or not, or whether the use of a gun would even be a legal response. In addition, the numbers may also include off-duty law enforcement officers. In comparison, data from the Department of Justice shows that an average of 232,400 guns were stolen each year from U.S. households.

The fact is that the use of guns in self-defense in America bears little resemblance to the false claims made by the NRA and its gun industry partners. Perhaps most striking is that in a nation of more than 300 million guns, how rarely firearms are used in self-defense.