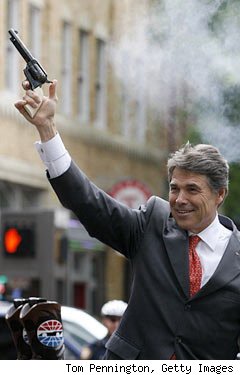 Remember two summers ago when most Americans were appalled by the sight of guns openly carried by protesters at presidential speaking events and town hall forums on the health care issue? Now it's not just the protesters bringing guns to political events. Now it may be the candidates themselves.

Texas governor and newly-announced presidential candidate Rick Perry has taken the incendiary mixture of guns and politics to a new level. When it comes to carrying concealed weapons, Perry certainly walks the walk. He has a concealed carry permit and proudly says that he carries a gun when he is out jogging.

Rick Perry apparently doesn't think the question is ridiculous. In fact, his sarcasm suggests he has no objection to political candidates carrying guns to campaign events; he seems to imply that he may do so himself. One thing is clear. The governor has been so thoroughly marinated in pro-gun ideology that he is unashamed about taking it to its logical extreme. If it is true that more guns in public places make us safer, why shouldn't political candidates carry guns? Isn't it the least they can do for their own safety?

I wonder if this thought ever occurred to Rick Perry: If a would-be presidential assailant is undeterred by Secret Service agents with Uzis, why would he be deterred by a presidential candidate packing heat? Does he think that if Ronald Reagan had been packing a Glock that fateful day 30 years ago, he would have gotten the drop on John Hinckley?

And then there's Senator Tom Coburn (R-OK). On Wednesday of last week, in expressing his frustration at the conduct of some of his Senate colleagues, Coburn told constituents, it's "a good thing I can't pack a gun on the Senate floor." I don't contest the senator's subsequent statement that he intended the comment as a joke, although, as Rep. Carolyn McCarthy (D-NY), whose husband was killed and son injured by gunfire, powerfully observed, "I don't think any person who has been or knows a victim of gun violence would find this a laughing matter."

Coburn's joke also brings to mind the expression, "Half of all truth is said in jest." The fact is that the senator, with one tasteless joke, effectively made the case against legalizing guns in public places. Yes, it is a good thing that senators can't carry guns onto the Senate floor because the presence of guns, even carried by well-meaning, law-abiding citizens, increases the risk that arguments and conflicts will escalate to lethal violence. It is the same reason that our national parks are less safe because (due to legislation sponsored by Senator Coburn himself) concealed carry of weapons is now permitted within their borders. It is the reason that our streets, restaurants and coffee houses are less safe in states that have made concealed carry easier. It is the reason that college campuses remain far safer than the gun-saturated communities that surround them, because the gun lobby has been foiled in its efforts to force colleges and universities to allow concealed carry

I wonder if Rick Perry got Coburn's joke. Or if he's wondering, "Why aren't guns allowed on the Senate floor?"

If Rick Perry is our next president and he has a like-minded Congress, guns on the Senate floor may not be a laughing matter. They may well be the way things are in an American nightmare where, in political discourse, the guns speak louder than the rhetoric.