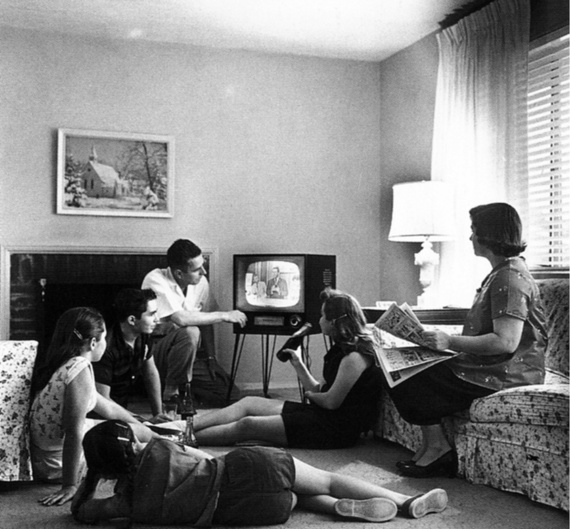 Another round of the usual comments from politicians, police, TV personalities, blah blah blah.

Our prayers go out.

Always the same platitudes, but always nothing changes.

Clearly, there is something wrong.

According to the Washington Post, there are now more guns in America than there are people.

But the issue is not really about guns. Switzerland has nearly as many guns, on a per capita basis, as America, but they just don't experience the kinds of mass shootings that have become, quite literally, a daily occurrence in American society.

Clearly, something else is at work here. Something that makes us an inherently violent society.

For the past 50 years, Americans, more than anyone else, have been engaged in a rather unique and national sociological experiment -- the results of which, I think, are starting to show now.

Beginning in the late 1950s, Americans began to watch TV. A LOT of TV. All the time.

That was something that no human society in history had ever done before. It was an entirely new activity. And TV became (and remains) highly addictive. Today, the average American spends five hours a day watching TV. When we added smart phones and computer screens to our culture in the the last decade or so, our screen watching time went to 8.5 hours a day.

8.5 hours a day staring at screens, every day, 365 days a year. Five of those hours watching TV. Every day. From the age of three or so, onwards. We are inundated with video and visual images. We now spend more time staring at screens than we do anything else -- including sleep. Screen watching is our number one activity a nation. This HAS to have an impact -- and it does.

Extrapolating forward, by the time you are 40 years old, the average American will have witnessed more than 500,000 acts of violence.

This has to have an impact.

But we are not.

This is what we call entertainment.

The process of bathing ourselves in this endless stream of entertaining violence has an effect -- it teaches us, in a very subtle yet very certain way, that this is normal behavior. That this is the way people often act. That shooting people is, well, what people seem to do all the time. We have subconsciously exposed ourselves to this so often, like radiation, that it is now part of our DNA.

We have spent the past 50 years very carefully educating ourselves and our children that shooting people happens all the time.

If it happens all the time, and if the average person watches, oh, say, 200,000 shootings by the time they are 20 or so, does it not seem reasonable that we come to believe, somewhere deep inside of us that, yes, this must indeed by how people often act. That it is second nature? That it is normal human behavior?

Jean Anthelme Brillat-Savarin, the French food writer and gourmet said, "show me what you eat and I will tell you who you are."

The French have a food culture. We have a TV/Media culture. Show me what you watch and I will tell you who you are.

Yes, guns don't kill people. People kill people. But someone has to teach people to use those guns to kill people. And we have done a great job, a killer job in fact, of teaching this lesson to ourselves.

The next time this kind of thing rolls around (and that will probably be in a few days), if you find the TV coverage too upsetting (as every TV commentator and politician says today "this is VERY upsetting"), simply change the channel to, oh, say Game of Thrones (yes, we all love that one -- OK... rape, murder, stabbings, brutal torture, violence...) well, at least they don't shoot anyone.

But don't ask yourself "Why does this happen here?"