20 months ago, on a Sunday morning more or less like today, I woke up to a phone call from HuffPost’s National Editor informing me that a lone shooter at Pulse nightclub in Orlando, Florida, murdered 49 people, most of them queer people of color.

A few hours later, during the desperate hunt for a motive that follows every seemingly senseless atrocity like the one that unfolded in those early June hours, the assailant’s father told reporters that his was son “very angry” at the sight of two men kissing weeks before the shooting, saying that could have been a part of his son’s motive.

Heartbroken, enraged and looking for some way to process what had happened, I wrote a piece arguing that despite the victories the LGBTQ community had secured in recent years, a gay kiss ― even in 2016 ― was still considered a stunning, terrifying sight for too many people. I also argued that it was, in light of that devastatingly sobering fact, absolutely imperative for queer people to continue kissing whenever and wherever they could.

Others felt similarly, and HuffPost Queer Voices launched a #KeepKissing hashtag on social media that soon included thousands of queer and non-queer people proudly kissing same-gender partners, friends, coworkers and even strangers. The campaign sent a message to both allies and enemies that this simple, beautiful demonstration of love may still be considered disgusting by too many people ― and was therefore still a risky public act ― but, despite the very real and possibly dangerous consequences that could follow even the most innocent of displays of affection, we would not be ashamed; we would be paralyzed by our fear and we would not stop kissing.

This morning I woke up to a photo of Olympic skier Gus Kenworthy kissing his boyfriend before a qualifying run in Sunday’s slopestyle event in Pyeongchang, South Korea:

A first -- NBC just showed Gus Kenworthy getting a kiss from his boyfriend Matt Wilkas on live TV at the @Olympics. https://t.co/WlAgM5edYb pic.twitter.com/5M3hP3kYCk

I, of course, had a very different reaction to seeing this photo than I did to the news I received almost two years ago; but after my initial exhilaration subsided, I couldn’t help but think how stunning it still is to see two men kissing in public.

In some ways, sadly, it may be even more stunning than it was in 2016 considering the America we’re struggling to make sense of right now: a country that, for the first time since the inception of GLAAD’s Accelerating Acceptance study four years ago, is reportedly experiencing a “swift and alarming” drop in overall acceptance of LGBTQ people. The report also found a “significant” increase in the number of queer people who have been discriminated against because of their sexual orientation or gender identity.

Even more disturbing, there has been a 400 percent increase in hate-motivated homicides against cisgender queer, gay, and bisexual individuals from 2016 to 2017, according to the National Coalition of Anti-Violence Programs. Meanwhile, violence against transgender women of color continues to increase, and tragic headlines describing fatal attacks on black lesbians and their families brought in the new year.

This news, while shocking, shouldn’t be surprising considering who is in the White House and what has transpired in the last year. Since coming into office, President Donald Trump and his administration have rescinded protections for queer people, nominated virulently anti-queer judges and politicians and openly supported ― or, in some cases, even advocated for ― anti-LGBTQ rhetoric on a national scale, all of which has made the already perilous existence of being queer in America even more perilous as we trudge further and further into Trump’s presidency.

Which is why images like the one of Kenworthy and his boyfriend are more important than ever ― and not just in America but in so many parts of the world where being queer is considered deviant, criminal or even punishable by death.

The apparently unplanned kiss (his boyfriend jokingly insisted “if I’d have known it was a big deal, I’d have made out with him”) is just the latest move by Kenworthy, who, along with fellow Olympian and friend Adam Rippon, has used the Olympics as an opportunity to defy the anti-queer rhetoric coming out of the Trump administration, especially from Vice President Mike Pence, who attended the opening of the 2018 Winter Games.

“To be able to do that, to give [my boyfriend] a kiss, to have that affection broadcast to the world, is incredible,” Kenworthy said. “The only way to really change perceptions, to break down barriers, break down homophobia, is through representation. That’s definitely not something I had as a kid. I never saw a gay athlete kissing their boyfriend at the Olympics. I think if I had, it would’ve made it easier for me.”

Didn't realize this moment was being filmed yesterday but I'm so happy that it was. My childhood self would never have dreamed of seeing a gay kiss on TV at the Olympics but for the first time ever a kid watching at home CAN! Love is love is love. pic.twitter.com/8t0zHjgDg8

And while Kenworthy and Rippon would probably argue that they are simply being exactly who they are when they aren’t competing ― or under the spotlight ― on the world stage, their use of these opportunities to make a statement (even unknowingly) have been nothing short of thrilling and matter more than ever.

As much as I look forward to the day when queer kisses can be as ho-hum and apolitical as non-queer kisses; as long as they still aren’t, we must continue to keep kissing, telling our stories and being whoever we are whenever possible without offering excuses or apologies ― not only to show our enemies that despite our very justifiable fears, we won’t be terrorized into silence and aren’t going anywhere, but also in the hope that it might startle even one queer person into realizing that there could be a place for them in the world where they can move beyond the already exhausting daily task of merely surviving and can actually secure a life for their self filled with all of the things ― from truly equal rights to a quick peck the lips ― that make life worth living. 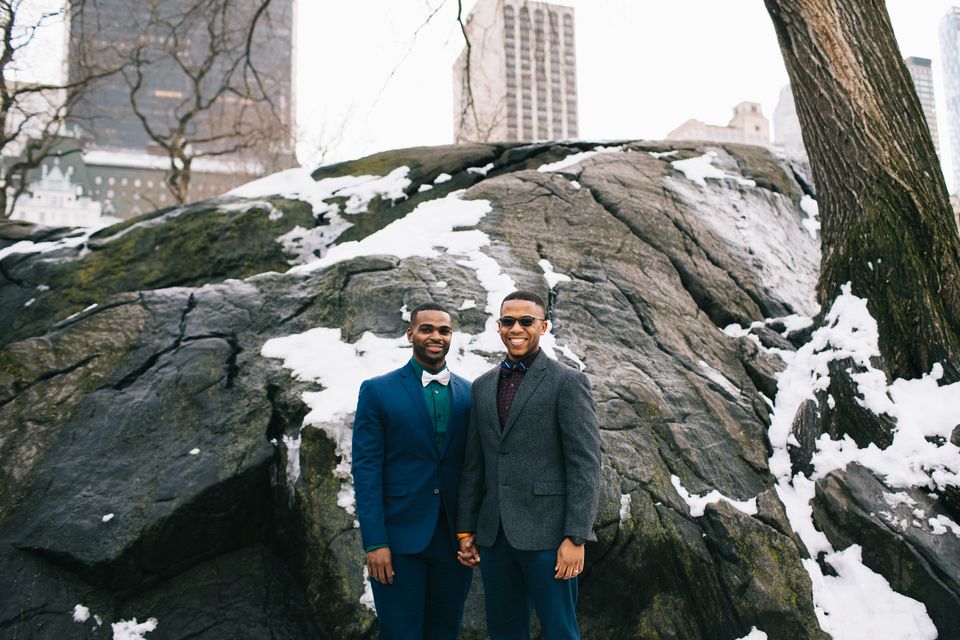 1 / 6
Jan-Kristòf Louis and Kellan Mansano
<strong>How did you two meet? How long have you been together?<br><br></strong>My high school friends were his college friends. We met on Jan. 20, 2006, at Hunter College. I went to Cooper Union at the time but hung out on the third-floor bridge at Hunter with my former high school friends where I met Kellan. We are going on&nbsp;12 years together this year.&nbsp;<br><strong><br>How do you define black love, and how does your relationship exemplify that?<br><br></strong>I wasn&rsquo;t aware of being black until I moved to this country [from Haiti]<strong>.</strong> Kellan is a caseworker working on his master&rsquo;s to become a social worker, and I am a fifth-grade teacher in the East New York neighborhood in Brooklyn. We both work with underprivileged and impoverished communities. However, that never stopped us from seeing the enrichment in the communities that we ourselves are part of. My students don&rsquo;t see a lot of the traditional relationships that children in wealthier districts are accustomed to. When my students hear about my relationship with Kellan, that we dated, that we are planning to get married and that we want children and build a family, it opens up a door of wealth to them that they never thought possible for them. Black love tends to be either nonexistent or broken around them. I had a student once ask me if I was gay because I was too nice to girls. I wasn&rsquo;t out to my students at the time. Now they ask frequently about Kellan and have actually written cards for us to wish us the best for the wedding and on. Last year, all my girls wanted to be flower girls and all the boys wanted to be our best men. They didn&rsquo;t just see it as gay love. They saw two men they could look up to, capable of loving one another fully despite the adversities that they have faced.&nbsp;<br><br><strong>In which ways do you see your relationship as a queer couple represented in conversations about black love, if any?<br><br></strong>Kellan and I speak about this often when it comes to our parents, our friends and the media. We are the only black gay couple our friends know. They tell us quite often. There are no television shows with a black gay couple in the lead or in any type of supporting role. There are no romantic comedies with black gay couples. When black gay men are represented in the media, they tend to be accessories to the heterosexual woman or going through a tragic stage of their life. There are no quirky posters about gay black couples. Instead, we see warnings to inform your partner of your HIV status but not an advertisement for Match.com. We may ignore it as a society, but it is ingrained in our society to the point that as queer black people, we tend to not see relationships evolving into marriage and family possible for us. I still speak to some of my former students who have divulged to me that when they think of Kellan and I, they know black, queer love is real. If we can move the children, we can surely move the world.&nbsp;<br><br><strong>How can we ensure queer couples are included in conversations about black love?<br><br></strong>When it comes to involving queer couples in conversations about black love, we need to be inclusive. The LGBT community is a wide spectrum of brilliant types of people, and they simply cannot be being ignored. Let&rsquo;s talk about the couples that we know. Let&rsquo;s make that effort to believe that we can change the narrative about love by taking part in it ourselves. Let&rsquo;s remember why it was so difficult to say &ldquo;I love you&rdquo; because they knew how important it was and what it meant for the future. There are plenty of stories out there about black love that are not being represented. We can make the effort to push them in the forefront.
Story & Gold