In honor of Gustave Courbet's birthday, we are revisiting a post originally published last year honoring the artist's life and work.

We can think of few artists who embody the spirit of unbridled liberty and personal conviction better than Gustave Courbet. The rugged, bohemian painter would turn 194 if he were miraculously still with us today.

Courbet was born in 1819 in Ornans, France, a region that remained close to his heart throughout his artistic career. After a brief stint in law school, Courbet began painting, focusing on landscapes and the daily lives of peasants and neighbors. The reigning academic art schools were Romanticism and Neo-Classicism, which focused on mythological, religious or historical themes. The subject of capturing quotidian contemporary life was unheard of and unacceptable at the time. Yet Courbet deemed the lives of his relatives and fellow inhabitants of Ornans worthy of immortalizing, and on an epic, massive scale at that.

His works rebelled against the academy not only in subject and size but style as well. Prior to Courbet, most painting attempted to mask its materiality to more closely resemble what it represented. Yet the French artist revelled in the rough and fleshy textures oil paints provided, exploring the ways their irregularities mimicked those in nature. He did not strive for perfection, but sought to depict reality in all its beautiful messiness.

When "A Burial at Ornans" debuted in 1850, Courbet received great attention for the vast 10 by 22 feet canvas depicting the true-to-life funeral of his grand uncle. A work of this magnitude was normally reserved for religious or royal subjects, making the depiction of real-life townspeople nothing less than blasphemous. The piece was accused of being purposefully ugly, and Courbet was accused of being a savage, an anarchist and a genius (all of which we suspect he would have agreed with at the time). Of course, he became an instant celebrity, both from his revealing personal works and outspoken -- even narcissistic -- attitude regarding it. He turned his artwork into a sort of reality show.

Continuing to punctuate his talent with a bit of naughtiness, Courbet turned towards sexuality to rumple the feathers of the stuffy Salon. "Sleep" depicts two naked women caressing each other in bed, while "The Origin of the World" gives a close-up look at a vagina that would give many of modern art's provocateurs a run for their money. Yet Courbet's inspiration was far richer than just sex. In "The Source" a naked woman fetches water from a waterfall surrounded by foliage. The fertility of the woman's voluptuous form is the same as that of the fruitful earth and the brusquely applied paint. Likewise, a rebellious roughness runs through the wild natural brush, the woman's wrinkled thighs and Courbet's own strokes. Bodies are the stuff of the world, as is paint; for Courbet they were all connected, and he wanted to be in the thick of it.

His libertine spirit persisted throughout his life: he notably declined the cross of the Legion of Honor in 1870 and eventually went into a self-imposed exile in Switzerland. His work inspired Paul Cezanne to look closer at nature's juiciness and Edouard Manet to continue to horrify the uptight art elite with provocative works like "Olympia." His legacy lives on to this day; for example, Mickalene Thomas recently bedazzled an image of a vagina for her "The Origin of the Universe" exhibition.

Happiest of birthdays to you, Mr. Courbet. Here's a slideshow of our favorite works below: 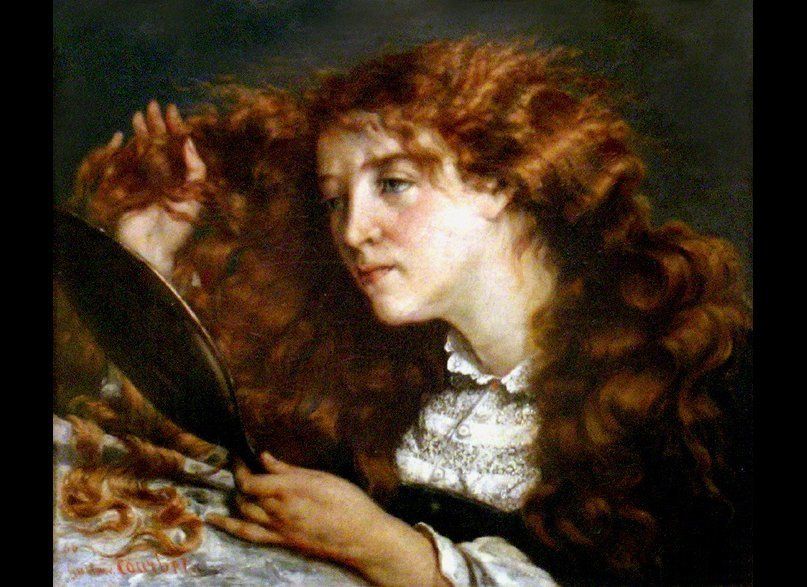