For the first time ever in his career, Gustavo Dudamel will conduct all nine Beethoven symphonies on successive nights, in numerical order. From July 8-12, Gustavo, his Orquesta Sinfónica Simón Bolívar from Caracas, and the lucky audiences at the Teatro Mayor Julio Mario Santo Domingo in Bogotá, will be tracing the steps of genius. 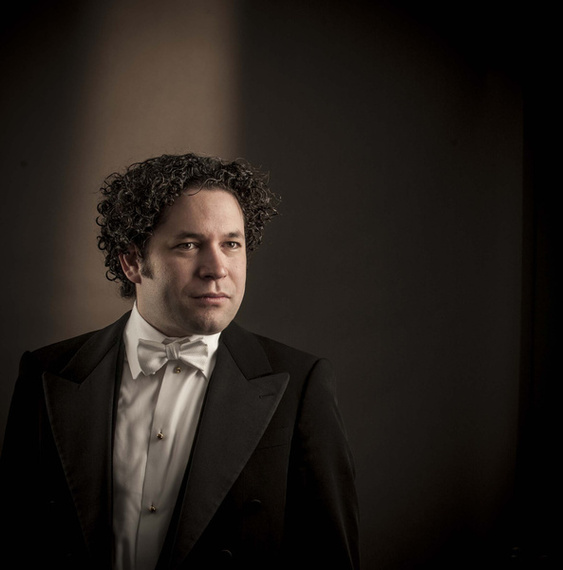 Gustavo Dudamel. Photograph by Vern Evans
When Gustavo Dudamel raises his baton at the Teatro Mayor Julio Mario Santo Domingo on the evening of July 8, he, the Orquesta Sinfónica Simón Bolívar, the audience and Bogotá will begin to retrace the steps Beethoven took when he created the modern symphony. On each of five successive nights, Gustavo and his Venezuelan orchestra will perform two symphonies in chronological order, concluding on July 12 with the mighty Ninth. It will be the first time Gustavo has ever played the complete cycle on five successive nights there, and it will probably be the first time any of the audience has heard it that way either.

With Gustavo at the helm, in all the full glory of his youth, and considering the joyful power and brilliance of his Deutsche Grammophon recordings of the Third, Fifth and Seventh Symphonies with the Simón Bolívar orchestra, the progression of the nine symphonies will seem like the advance of nine mighty, classical music super-heroes.

There are lots of back stories about why each symphony was written, what was going on the world and what each means.

For this once-in-a-lifetime Beethoven experience like this, however, it may be best to just let the symphonies rock and roll as if you were hearing them for the first time.

I couldn't find anyone who had played all nine symphonies on successive nights, but I did find the next best thing, someone who had done all 16 string quartets on successive nights. It was Guillaume Sutre, first violinist of the Ysaye Quartet which played at the Bogotá es Beethoven festival in 2013. Asked what it was like, Sutre replied,

"It was a week of six concerts at the Besançon Festival that became the most challenging concerts I ever performed. The difficulty of playing all the quartets was much more than I could have imagined; my body was tense and tired from the sheer physical and mental stress of the relentless intensity of Beethoven's musical, intellectual, emotional and technical demands.

"It took me some years before I could enjoy performing the cycle again; and then we did it close to 20 times, each time being a richer experience, especially when we played them in chronological order, as Gustavo is going to do in Bogotá.

"Sometimes, when we were playing these quartets one after another, the four of us, and I think the audience as well, fully understood and enjoyed the revolutionary quartet-by-quartet evolution of Beethoven's writing tpo such an extent at, at times, I had the distinct sensation that Beethoven was there, sitting next to me!

"I can't imagine," Sutre added, "how incredibly powerful hearing the symphonies one after another will be."

The Teatro Mayor is a perfect place acoustically for Beethoven, the instrumental sections in the orchestra joining up in their endless different pairings, cellos with woodwinds, strings with percussion, violas and piano, harp and celeste, horns with strings, all heard so clearly.

Music, however, is more than acoustics. And for musicians, Bogotá is one of the best places to make it. Especially Beethoven.

"I had the distinct feeling that Beethoven's music was coming alive and speaking directly to Bogotá's audiences, many of which had never heard it before.  It proved to me, once again, the universality of great works of art.  I have nothing but the highest possible respect and admiration for the people who made Bogotá es Beethoven possible, especially the staff at the Teatro Mayor, and its visionary leader, Ramiro Osorio.   The affordability of the tickets turned the festival into a veritable Beethoven town fair, where the whole city - families, students, children, senior citizens - flocked to hear this extraordinary music.  I have no doubt that this festival  changed many bogotanos'  lives forever.

"Because Beethoven's music is able, like perhaps no other, to delve into the deepest regions of the human experience, the emotional journey through which I lived during the year in which the Cuarteto learned his Quartet Op. 131 was life-transforming to me.  In this piece, Beethoven is unconcerned with form, duration or technical considerations. Instead, he writes music which grabs and shakes your soul, putting you face to face with regions of yourself which are not accesible otherwise.   After the concert at the Teatro Mayor, I felt exhausted, drained, but alive in a way I had seldom experienced before."

Guillaume Sutre told me that playing Beethoven in Bogotá was,

"a very special experience. We often hear that classical music is reserved for an older and more expert audience, that Beethoven quartets can be unfriendly to a novice listener, etc. This was not the case in Bogota and it was very moving to be sharing these masterworks in superb halls with a very large audience, young and enthusiastic.

"Bogotá was also a very strong experience for a musician, spending a week with other musicians coming from everywhere with this common agenda of rehearsing, performing, listening, discussing, all and only about this musical giant and great humanist."

Gustavo himself told me last year when asked about the affection between he and Bogotá, and why he chose Bogotá to perform his first ever, live Beethoven cycle,

"Both my orchestra and I have a long history with Bogotá and with Colombia. Firstly, we are neighbors and brothers, sharing a common, extraordinary history and culture. We feel like we are in our home-away-from-home when we are performing in Bogotá which is why we probably give more concerts there than anywhere else on tour in South America!"

Next week: How Gustavo does Beethoven