After eight years of making theater with urban teenagers and witnessing how challenges can be turned into fuel for creativity, I know that Orson Welles was onto something when he said that "the true enemy of art is the absence of limitations." That's all well and good, but I'm pretty sure my man Orson never tried putting on a full-length Broadway musical with a hundred South Bronx teenagers on a tiny stage in a school gym while pregnant and raising a two-year-old.

Here's Part 1 of a condensed 100-day countdown to our production of Guys and Dolls, in performance at Bronx Prep May 24-26. Witness the mayhem, the misery, and the small moments of grace in the midst of it all, and stay tuned for Part 2 next week.

We haven't even decided which show we're doing this year and already we can't seem to catch a break. I find out today that we can't get a performance license for the The Color Purple, which is the musical the student leaders of the Bronx Prep Performing Arts Academy have been clamoring to put on at school ever since they saw it on Broadway two years ago.

I'm sorry that kids who've shown such strong initiative won't get their first choice, and that the now-tight timing means that teachers, not students, will choose the show this year, but I can't say I'm personally devastated by the news. Deep in the grip of first-trimester crankiness and bracing against one of the coldest, dreariest winters on record, I have to admit that swapping out an emotionally wrenching drama for some good old fashioned jazz-hands sounds like a great idea to me right now.

In keeping with tradition, we announce the spring show with a dramatic unveiling of a bulletin board outside of room 201. This year's crowd of curious kids and teachers is bigger than ever.

After what I hope is a rousing build-up, I rip off the sheet to 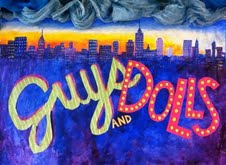 reveal a hand-painted poster of the New York skyline overlaid with a bright pastel logo for Guys and Dolls.

Usually there's applause. Hollering. Jumping up and down.

This year? Crickets. The kids look around at each other, bewildered. It hits me that they've never heard of the show. A posse of high school girls peels away from the crowd and storms off down the hallway.

After a few days of stewing over the kids' reaction to our show choice, I find out that the girls' exit wasn't really as huffy as it looked. As one student explains to me today, far from storming off, they'd actually almost trampled each other racing down the hall to the library to Google the show and figure out what leads to start preparing for.

I wake up this morning so nauseous and tired I can barely get out of bed, but my mood is buoyed by the turn-out at auditions. Last year we had about 65 kids. This year, 147 kids show up -- nearly 20 percent of the Bronx Prep student body.

Granted, this means auditions are a logistical nightmare. Not to mention a fire hazard. I agonize about how many kids we'll have to cut. I also struggle at several points during the first round not to throw up. (I haven't told the kids I'm pregnant yet and can only imagine what my vomiting during their singing would do to their fragile egos.) 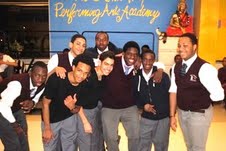 But overall the energy is great. And the best part is that almost a third of the kids trying out are first-timers, most of them guys.

Cast list is up. Lots of crying kids. Phone calls to devastated parents. Year after year, I never get used to this part.

First rehearsal. Ninety actors packed into a room designed to hold forty-five. How did I let myself cast so many kids this year? Pregnancy hormones to blame?

I share the news that I'm expecting a baby and tell the kids they better not mess with me this year. They grin and rub my belly and promise to be extra calm, quiet, respectful and responsible. I grin back and tell them I'll believe it when I see it.

Tragically, my over-casting might turn out not to be such a big issue after all. Today I discover that almost 30 percent of our cast members will be academically ineligible to participate unless they get their grades up by the end of the marking period.

The really bad news is that on the list of struggling kids is the actor who plays Sky Masterson, the male lead. Why has this bright, capable young man suddenly given up on himself halfway through his senior year with a lead role on the line? 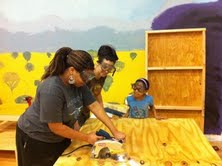 The cast may be a hot mess, but the set crew is holding it down. With so many of last year's set crew guys now playing roles in the show, most of the crew this year is female.

There is nothing I love more than watching an 11th grade girl teaching a 5th grade girl how to use a circular saw.

Chris Moncrief, one of my former students and star of the Bronx Prep Musical Theater program as well as the Speech Team, comes back from his first year at Syracuse University to pay us a visit. Without waiting to be asked, he steps into a rehearsal with a group of middle school boys and within minutes the scene transforms from stilted and flat to rhythmic and hilarious.

Drama with our male leads continues to plague us.

Today a friend emails me an Onion article about Barack Obama holding nationwide auditions for Guys and Dolls. Even after auditioning 8 million Americans for the role, the article jokes, Obama is still searching for the perfect Nathan Detroit. On any other day I would have laughed out loud at this, but today I can only muster a gallows-humor sigh: soon I might be conducting that same search all over again. I've just gotten word that tomorrow I have to attend an expulsion hearing for a 10th grader I've known for four years and have come to love like a son -- none other than the kid who plays Nathan Detroit.

Stay tuned for the second installment of this three-part series of posts leading up to opening night of Guys and Dolls at Bronx Prep.

A version of this piece also appears at GothamSchools.org. As always, the students featured in this article agreed to let me share their stories; the views expressed here are my own and not those of my school's administration.