Corinne Fisher and Krystyna Hutchinson have had a lot of sex -- and they're not afraid to talk about it.

After Fisher went through a rough breakup, the two New York-based stand-up comedians, both in their mid-20s, decided to pool their collective un-shame about sex and create a podcast in which they interviewed men they'd slept with. The first episode of "Guys We F**ked, The Anti Slut-Shaming Podcast" was released in December. Since then, their audience has grown quickly, and the show now has over 200,000 subscribers on SoundCloud.

"We're saying, have a lot of sex and be proud of it," Hutchinson explains at the beginning of the debut episode.

The pair first met five years ago when Hutchinson took a college internship at the talent agency where Fisher then worked. They discovered that they were both interested in doing stand-up, and soon formed the comedy duo Sorry About Last Night. "We are really good friends in real life," Hutchinson told The Huffington Post. "I think that’s where our chemistry comes from in the podcast."

That friendship extends to no-holds-barred, frank discussions about sex. The pair touch on everything from dirty talk to disastrous one-night stands with equal parts honesty and humor. But "Guys We F**ked" isn't meant to titillate -- Hutchinson and Fisher hope that the podcast encourages women to feel more comfortable with themselves and everyone to have more great, shame-free sex.

Just don't accuse these two of hating the men they talk to and about. "We had sex with them," says Hutchinson. "We obviously liked them a great deal."

HuffPost Women: How did the idea for this podcast come about?
Krystyna: One day Corinne texted me and said: “Hey, wanna do a podcast where we interview guys we’ve f**ked? We can call it 'Guys We F**ked.'" So we talked about it and pitched it to Stand Up NY Labs and they were immediately on board. It basically stems from the fact that we’re both very sexual people and we’re proud and we own that.

Corinne: It’s not like I just woke up one day and thought, “I wanna interview everyone I’ve f**ked.” I was going through a really tough breakup and I was trying to think of different ways I could better myself as a human being. I had this John Cusack-like idea that if I went back and talked to different people I had slept with or had relationships with, I could figure out if I was doing something wrong. That progressed into Krystyna and I making it into something a little more empowering and a little less personal. We love being funny but we’re also interested in why things are the way they are for women. Why do people feel the way they do sexually? There’s a lot of shame that confuses us.

You call "Guys We F**ked" the "anti slut-shaming podcast." Had you experienced slut-shaming in the past?
K: Yes, we have. When we started out in comedy, we experienced some things. One time I walked down the street and there was a guy trying to sell tickets to a comedy club and he asked me if I wanted to buy tickets to the show, and I said “Oh no, I’m actually a performer.” He said, “What, are you a stripper or something?” And I said, “No, I’m a comedian.” But he didn’t believe me. And that’s something that happens to us all the time.

Since starting in stand-up comedy I’ve realized that sexism is alive and well. Also, I’ve noticed that a lot of my girl friends feel ashamed about what they do sexually. We wanted to make women feel more comfortable, and for men to feel more comfortable and to hear what we talk about.

C: Yeah, I think the phrase, “Oh, she’s such a slut” is dropped so casually by men and women. And I don’t think you need to be the victim of something to recognize that it’s wrong and to fight against it. Sometimes it’s more powerful if it’s not the “sluts” fighting against slut-shaming, but rather someone who’s just, “We need to be more supportive of one another.” I think women call other women sluts a lot and that is terrible.

Why do you think that slut-shaming is such an issue in our culture? Are people just terrified of women as sexual beings?
K: Yes, I think people are afraid. Hate stems from fear and I think they’re just afraid of a woman who is empowered and sexually in charge and in control of her own body. And I also think that some people were raised to feel this way because the people in their lives didn’t have a positive attitude towards women, and they don’t realize that it’s messed up.

I would assume that you’ve gotten some mixed reactions to your podcast. What have been the most frustrating ones?
K: When we first started on SoundCloud, users would comment. Most of them would be praising the podcast. Sometimes we’d get someone saying “Oh, I’d love to f**k those sluts.” But it’s impossible to get angry about those comments. You know what? You’re calling yourself out on being an ignorant a**hole.

C: We speak very freely and graphically about sex, but obviously we’re not gonna f**k anyone who says “I wanna f**k you, sluts,” so dream on. The worst thing for me is when women make comments being like: “You are filthy, you don’t get this, you’re disgraceful.”

K: I kind of expected it from men, because they’re losing the power struggle here, but when it’s women against their own kind I just sit back and think “we have so far to go.”

What do you hope listeners take away from the podcast?
K: We want to make people feel more comfortable in their own skin. We just got a message from a girl from New Delhi, India, about how she loves the podcast because it makes her feel like it’s OK to be comfortable with your sexuality and enjoy sex. And that made me so happy.

How have men reacted when you approached them about being guests on your show, especially at the beginning?
K: All of them thought it was a great idea. The ones that opted not to do the podcast, did so out of respect for their wives or girlfriends -- this one guy I asked, who I love and am still friends with, just had a baby and he kind of didn’t want to come out in the world and talk about f**king now that he has a daughter, and that’s fine. But most people have been really excited and it’s been very well-received and they’ve had a lot of fun.

C: We allow people to be anonymous and really, unless you’re a public figure, or someone really personally knows you, there’s no way your identity is gonna get out. We record this in a private studio and we never use last names, except with Jim Norton because he’s a famous comic and we didn’t have sex with him.

I think that often men crave a space to talk about sex. Women tend to have more spaces to discuss these things than men do, so it’s kind of awesome that you’re bringing both perspectives to listeners.
K: One thing I’ve realized is that men don’t have these conversations in their living rooms like women do. A lot of our male listeners are fascinated because they want to hear what women say when they talk about sex with their friends. We’re opening up that private conversation to the public.

And we’re in our mid-20s. We don’t know everything, we make mistakes as we go and we’re very honest about those mistakes. I think that’s another reason people kind of identify with it.

Do you ever feel conflicted about putting so much of your personal life into your work?
K: We’re both stand-up comedians, so I think we do that anyway. But this is on a much larger scale. When we’re recording the podcast it genuinely feels like we’re hanging out in a living room and just shooting the sh*t about sex. I sometimes forget we’re recording. And at the very beginning I said a few things about my boyfriend of three years and what he likes sexually. I probably should have waited to let him speak for himself. So that was a lesson learned. 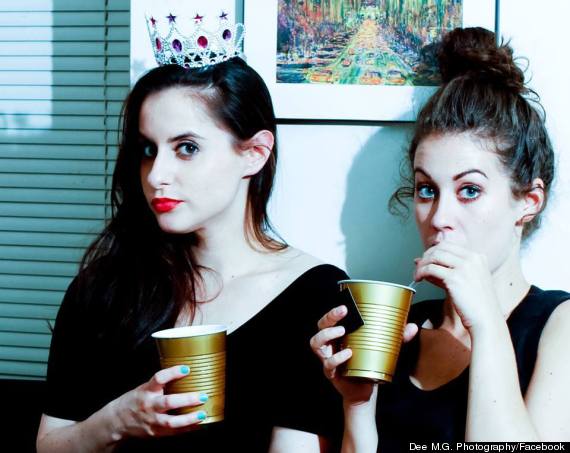 Do you think that there is a specific value in women being confessional?
K: I think there is tremendous value in women being honest about the mistakes they’ve made. There are so many industries that depend upon women feeling insecure. And that’s a lot to handle as a woman -- just having all these images of what you should look and be like -- so when you finally hear a woman being honest about something she’s insecure about, it’s so refreshing. It almost takes weight off of my shoulders knowing that there are other people who feel the same way.

C: A lot of times the argument we’ll hear is: “Well, I don’t think men or women should be talking this graphically about sex. Sex is private.” I totally hear people on that. That’s the beauty -- you can keep your sex private. It’s almost like we’re taking it a little over the top and talking about sex a little more in-depth just to push the point home that this is not something to be ashamed of.

K: Guys can be easily intimidated by a woman who has a lot of sex. I’ve never really understood that.

Do you two consider yourselves feminists? Do you shy away from that term at all?
K: I don’t shy away from the word “feminist.” I think it’s unfortunate that people have a negative connotation of that term and I’m guilty of being that way too, sometimes. I find myself saying, “Well, I’m not like a feminist or anything, but...” But what feminism means to me is owning your sh*t. And under that definition I am absolutely a feminist.

C: Yeah, I like to call myself a modern feminist. I loved the Spice Girls because they dressed however they wanted and they rocked their hot bodies, but they were still promoting a really positive message. And I think to say that to be a feminist you can’t show off your body or be overtly sexual is bullsh*t. Jesus, if I can’t wear a miniskirt in my 20s, when can I?