The mother of Eric Garner, the black man who died in 2014 after a New York police officer put him in an illegal chokehold, endorsed Hillary Clinton’s campaign for president on Thursday.

Gwen Carr said in a statement on Clinton’s campaign website that the former secretary of state is the best candidate to tackle gun violence and police brutality.

“We’ve got to do something about the violence in our communities ― especially gun violence,” Carr said. “Hillary seems to be the only candidate right now who’s talking about how we can be strategic in trying to solve this problem. That’s why I’m endorsing her for president.”

Carr’s endorsement follows similar pledges of support from Sybrina Fulton, the mother of Trayvon Martin, 17, who was killed by a self-appointed neighborhood watchman, and Lucia McBath, the mother of Jordan Davis, 17. who was shot to death by a motorist at a Florida gas station in an argument over rap music. McBath this week penned an op-ed for BET.com supporting Clinton.

Carr, whose 43-year-old son died at the hands of New York Officer Daniel Pantaleo after repeatedly saying, “I can’t breathe,” said her son’s death helped force the country to confront police brutality. She said Clinton is the perfect candidate to lead in face of injustice.

“I think all of us need to make the time to be involved in this election. With all the violence and injustice that’s upon us today, we need a candidate who can move us forward ― that’s Hillary,” Carr said. “We need to elect her, not just for us, but for our children, our grandchildren, and their children. We have to bring forth a legacy that will outlive us.

“Stand up today and be a part of that,” she said. 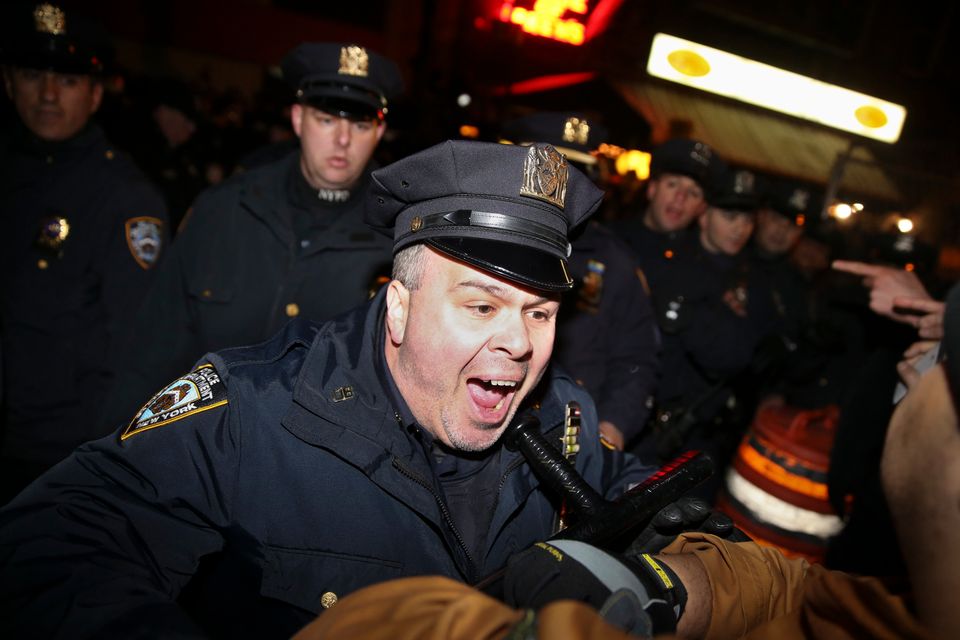 1 / 80
A police officer reacts as he pushes protestors away from an arrest during a march against a grand jury's decision not to indict the police officer involved in the death of Eric Garner, Friday, Dec. 5, 2014, in New York. (AP Photo/John Minchillo)
ASSOCIATED PRESS