We already knew that Gwyneth Paltrow was BFF with Beyonce and Jay-Z -- remember when the Goop maven was spotted busting a move at Jay's New Year's Eve concert? (You know, the one the "Watch the Throne" rapper co-headlined with Coldplay, her husband Chris Martin's band.)

Well, it turns out that Paltrow appreciates more than just Jay's music; she's espoused his brand of self-confidence, too.

“I don’t hold on to fear as much as I used to, because I’ve learned a lot about genuinely not caring what strangers think about me,” she tells Harper's Bazaar in the magazine's May issue. “It’s very liberating. It’s very empowering, and I’ve learned a lot of that from Jay-—Shawn Carter—Z, because his approach to life is very internal. It’s a very good lesson to learn.”

And she's presumably learned a lot from her husband: Paltrow and Martin have now been together for a decade. “We are growing into very similar people," she tells Bazaar. "It’s cool, it’s good. It’s not always easy, though!”

Paltrow also opens up about turning 40, and the questions prompted by that milestone -- such as whether to add to her current brood, which includes daughter Apple, 8, and son Moses, 7. “I’m at quite a pivotal point: Do I want to go back more into films? Do I want another child? Do I want to move back to the States? You can call me a lot of things, but you can’t call me complacent!” she says.

In fact, Paltrow recently revealed in an interview with The Mail on Sunday's You magazine that Apple and Moses are into the idea of a sibling.

“My children ask me to have a baby all the time,” she said. “And you never know, I could squeeze one more in. I am missing my third. I’m thinking about it.”

For more on Gwyneth Paltrow, pick up Harper’s Bazaar’s May issue, on newsstands April 23. 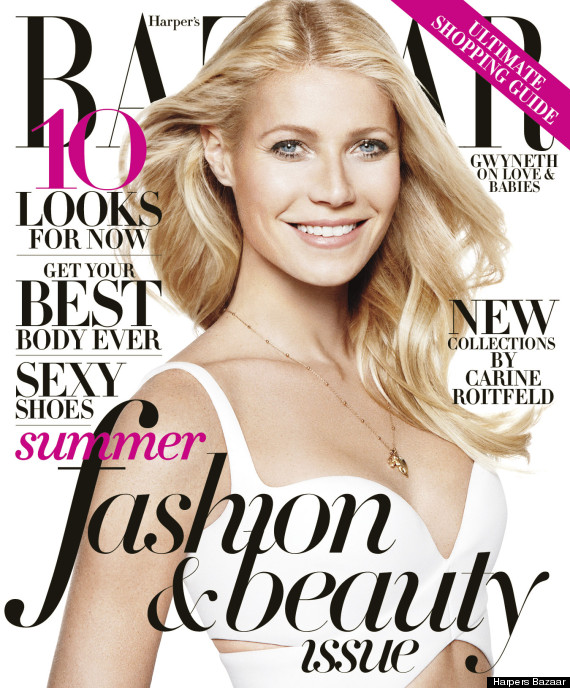