We all know it's easier to hate on Gwyneth Paltrow than to love her. Recently named The Most Hated Celebrity in Hollywood, the lithe 40-year-old actress invites derision over her workout regimen, impossibly strict diet and overall out of touch-ness from us regular folks.

But the recent wave of hate directed Gwyneth's way might be undeserved. According to the Daily Mail, Paltrow is under fire for featuring children's bikinis on her lifestyle site, GOOP. The kids' swimsuits are part of the Melissa Odabash collection for GOOP, which includes swimwear and cover-ups for both women and kiddies. But the ruffly navy string bikini for girls, priced at $45, is the one that supposedly has people up in arms.

A representative of a child safety charity Kidscape reportedly told the Daily Mail, "We remain very opposed to the sexualisation of children and of childhood. The dangers have been discussed at length, so it is a great pity that such trends continue and that they carry celebrity endorsement."

Similar reactions were directed at Elizabeth Hurley's kids swimsuit line back in September 2012, as well as at Abercrombie & Fitch for promoting a push-up bikini top for kids back in 2011.

But as far as we can tell, few customers seem to be enraged at Paltrow for her latest children's swimsuit project. Twitter isn't exactly buzzing with backlash, nor have commenters crashed GOOP with criticism (yet).

So what do you think: Are bikinis for little girls are a-okay or should retailers (and celebs) steer clear from promoting them?

The bathing suit in question: 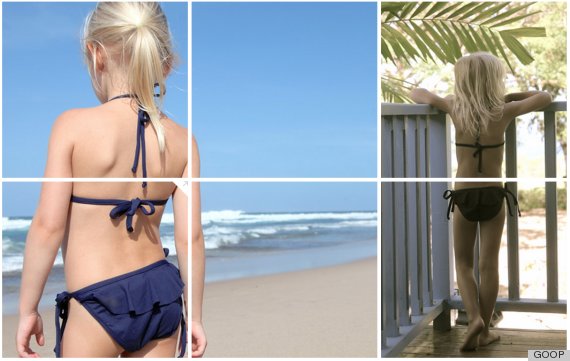 When fashion stirs up the pot...