An Atlanta gym owner who prohibits police officers and active military members from joining says he’s received death threats and a barrage of hate mail ― but his rule still stands.

Jim Chambers, who owns EAV Barbell Club in East Atlanta Village, ignited nationwide anger this week after word got out about his handwritten sign proclaiming: “no f***ing cops.”

“It’s not a new policy; this has been our policy since we opened, about a year and a half ago,” Chambers told HuffPost on Wednesday, saying he was fielding three to four angry phone calls per minute.

Chambers explained that his rule, which does not target veterans, is nothing personal and not an endorsement of violence. He and many of his members, who he said use his facility to hold activist meetings, are anti-military and pro “cop abolition,” he said. Some of them are also LGBTQ and of various racial backgrounds, and they don’t necessarily like the police.

“We are indicting systems. We are not indicting individuals,” he said.

Officers shot Lopez at his home after they went to his address by mistake during their pursuit of someone else, authorities told HuffPost at the time.

Following that same theme, a post on EAV Barbell Club’s Facebook page on Wednesday noted the three-year anniversary of the police shooting death of Michael Brown in Ferguson, Missouri.

Hundreds of comments responding to the post appeared to criticize both Brown and the gym’s rules. As of Wednesday evening, the gym’s Facebook page had a 1.4-star rating, with most reviews appearing to target the ban.

Chambers said those reviews don’t bother him, as “we’re not profit-seeking.”

“I actually subsidize the place and we don’t charge people who can’t afford to pay. Most of our members are bartering time by manning the desk for a little bit,” he said.

A post on the gym’s Facebook wall last year reads: “Full Communism. Pay what you can/want. Pitch in a bit.”

Of course, not all of Chambers’ members are politically active, he noted.

“We have members who are only interested in weight-lifting and they don’t care about politics,” he said.

Some members are also military veterans, he said, but he draws the line at those who are active.

“If we’re helping them [train] then we’re essentially helping the military grow stronger, and we don’t want to do that,” he said. “I make no exceptions. Once you become part of the system, we are not interested in serving you.”

The Atlanta Police Department declined to comment to WXIA-TV on Chambers’ controversial rule. A spokesperson did tell the news outlet: “Were we to respond to an emergency there, this sign would not stop us from lawfully doing our job.”

Lawyers also told the station that it would be up to a court to decide if EAV Barbell Club’s policy is violating any anti-discrimination law, as law enforcement officers are not a protected class. 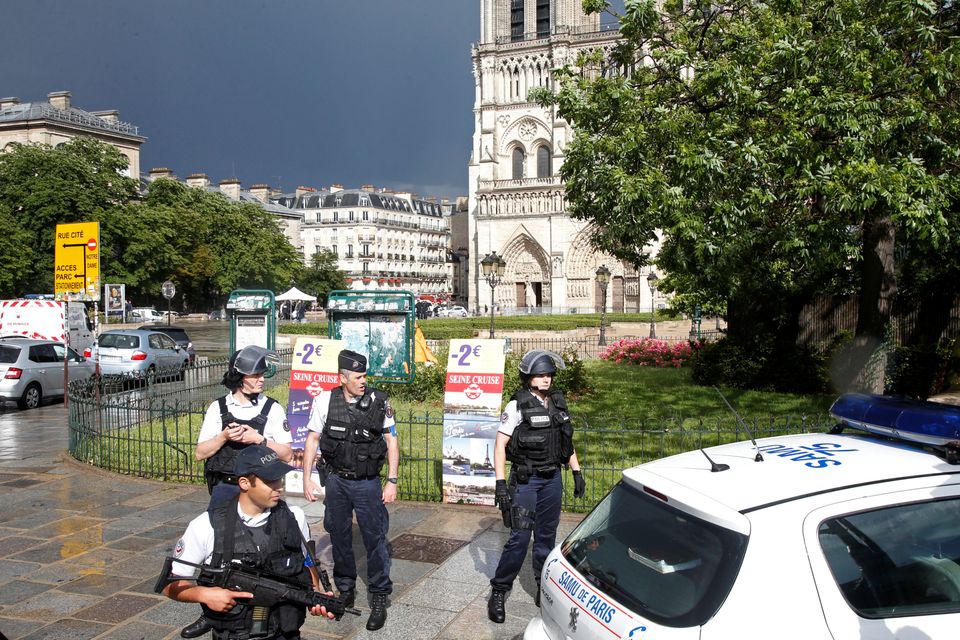 1 / 10
French police stand at the scene of a shooting incident near the Notre Dame Cathedral in Paris, France, June 6, 2017.&nbsp;
Charles Platiau / Reuters