Nearly half of young women in the United Kingdom aren’t sure where their vaginas are located, according to a new survey.

The surprising statistic comes at the beginning of Gynecological Cancer Awareness Month, from women’s cancer research charity The Eve Appeal. Given a simple diagram and asked to identify the womb, cervix, ovaries, vagina, and vulva -- five areas that can be affected by gynecological cancer -- only half of women aged 26-35 were able to accurately identify the vagina. (Hint: it's identified in the graphic below.) 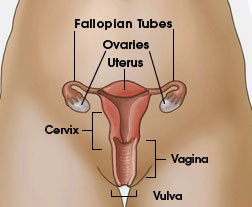 That statistic stands in sharp contrast to the knowledge of older women: 80 percent of respondents between the ages of 66 and 75 could correctly label the ovaries, and 90 percent identified the womb, according to The Eve Appeal.

What’s more, “less than a quarter [of young women 16-25] said they felt confident that they were well informed about gynecological health issues, compared to over 42 percent of women aged 66-75,” the survey revealed.

The Eve appeal found that a lack of anatomical knowledge isn't the only barrier: young women also lack comfort with the terminology of reproductive health.

According to the study, 65 percent of young women between 16 and 25 said they had issues using the words "vagina" or "vulva," resorting instead to monikers like "lady parts" or "women’s bits" when discussing their reproductive health.

“These cancers have some of the worst outcomes for women, with a 40 percent mortality rate," said Helena Morrissey, chairwoman of The Eve Appeal, in a statement. "Understanding the symptoms will save lives, which is why we are urging women this Gynecological Cancer Awareness Month to talk more openly about these life-saving issues.”

8 Things People Would Choose Over Sex