Sometimes it feels like people throw around the term "only in San Francisco" with a little bit too much carelessness. Just because someone told you there's a 45-minute wait for brunch or three of your friends are all competing to become the mayor of the new Norwegian-inspired taco truck on Foursquare doesn't entirely justify the declaration that those things could exclusively happen here in town.

On the other hand, sometimes the phrase is actually warranted. Take what happened during Monday's hearing of the San Francisco Board of Supervisors' Neighborhood Services Committee in which officials discussed a ban on public nudity, for example.

If you assume the next sentence is going to run along the lines of, "someone took off all of their clothes," you would be correct.

(SCROLL DOWN FOR GRAPHIC VIDEO)

During the meeting, nudity activist Gypsy Taub stepped up to the podium and addressed the committee. "Nudity does not harm children," she said. "Have you ever seen a child cry because they saw a naked person? What do children do when they see naked people? They laugh. It makes them happy, it doesn't traumatize them. Nudity is natural and harmless. Our bodies are God's gift and God doesn't make mistakes. Attacking our right to be nude is an attack on sacredness, beauty, love freedom, art and creative self-expression."

Taub then removed her dress, revealing a nary an undergarment, and declared, "attacks on body freedom are unconstitutional and un-American."

She was quickly escorted out of the room by police officers while chanting, "Up with body freedom, down with Scott Wiener."

Naturally, Taub was greeted with a rousing round of applause--probably for a whole variety of reasons.

The San Francisco Chronicle notes that Taub had sent out press release to various media outlets announcing her intention to disrobe during the meeting.

While the state of California doesn't prohibit public nudity per se, it does criminalize lewd behavior--something that's left up to each individual municipality to define for itself. San Francisco has long permitted public nudity, but the increasing number (not to mention boldness) of a group of naked men who have taken to "hanging out" in the Castro's Jane Warner Plaza has sparked significant outcry.

"I would just like to be able to walk down the street and buy a carton of milk without seeing someone's penis," mother and Castro resident Sheila Tenney told the San Francisco Examiner. "That's it."

Wiener's law would outlaw the exposure of genitals in public places. The law contains exceptions for street fairs and parades, so the city's famously nude-friendly events such as the Folsom Street Fair and Bay to Breakers would remain unchanged.

"While most people in San Francisco, myself included, have no problem with occasional public nudity, we've seen a shift in public attitude because of the over-the-top situation at Jane Warner Plaza and elsewhere in the Castro," said Wiener in a statement. "Until recently, public nudity in our city was mostly limited to various street festivals and beaches as well as the occasional naked person wandering the streets. What's happening now is different. Jane Warner Plaza is the only usable public space in the Castro and serves as the neighborhood's town square. Use of this small but important space as a near-daily nudist colony, while fun for the nudists, is anything but for the neighborhood as a whole."

"This plaza and this neighborhood are for everyone, and the current situation alienates both residents and visitors," he added. "We are a tolerant neighborhood and city, but there are limits."

Fines for violating the ordinance will run up to $500.

The three-member Neighborhood Services Committee unanimously voted to recommend the passage of Wiener's law by the full Board of Supervisors. The legislation is scheduled to receive a vote on November 20. 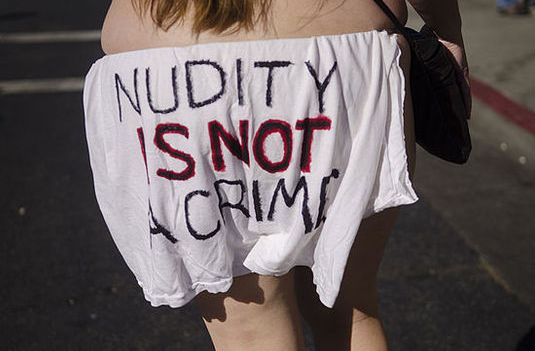