One of the most important characteristics of an alien planet is whether or not it falls into what's called the habitable zone ­— a Goldilocks-like range of not-too-close, not-too-far distances from the parent star that might allow the planet to host life.

Now scientists have redefined the boundaries of the habitable zone for alien planets, potentially kicking out some exoplanaets that were thought to fall within it, and maybe allowing a few that had been excluded to squeeze in.

"This will have a significant impact on the number of exoplanets that are within habitable zone," said research team leader Ravi Kumar Kopparapu of Penn State University.

The habitable zone defines the region where a planet might be able to retain liquid water on its surface. Any closer to the star and water would vaporize away; any farther, and it would freeze to ice. But water in its liquid state is what scientists are after, since that is thought to be a prerequisite for life. 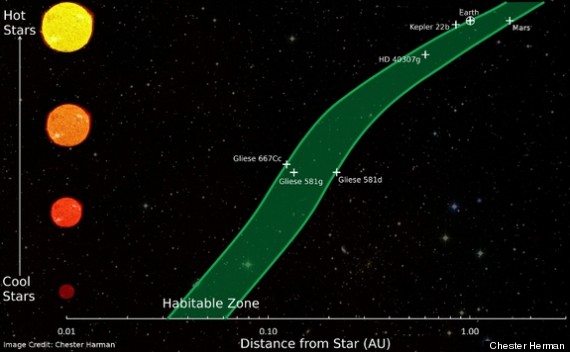 The graphic shows habitable zone distances around various types of stars, according to an updated habitable zone definition. Some of the known extrasolar planets that are considered to be in the habitable zone of their stars are also shown. On this scale, Earth-Sun distance is 1 astronomical unit, which is roughly 150 million kilometers.


The new definition of the habitable zone is based on updated atmospheric databases called HITRAN (high-resolution transmission molecular absorption) and HITEMP (high-temperature spectroscopic absorption parameters), which give the absorption parameters of water and carbon dioxide — two properties that strongly influence the atmospheres of exoplanets, determining whether those planets could host liquid water. [9 Exoplanets That Could Host Alien Life]

The scientists cautioned that the habitable zone definition still does not take into account feedback effects from clouds, which will also affect a planet's habitability.

The previous habitable zone definitions were derived about 20 years ago by Penn State researcher James Kasting, who was also part of the team behind the updates.

"At the time when he wrote that paper no exoplanets were discovered," Kopparapu told SPACE.com. "In 20 years, hundreds, maybe thousands have been discovered."

The new definition isn't radically different from the old one. For example, in our own solar system, the boundaries of the habitable zone have shifted from between 0.95 astronomical units (AU, or the distance between Earth and the sun) and 1.67 AU, to the new range of 0.99 AU to 1.7 AU.

"It's a surprise that Earth is so close to the inner edge of the habitable zone," said astronomer Abel Méndez of the University of Puerto Rico at Arecibo, who was not part of the team behind the redefinition.

Méndez manages a list, called the Habitable Exoplanet Catalog, off all the known planets beyond our solar system that could be habitable to life. The new study will necessitate some adjustments to the catalog, he said.

He mentioned one planet in particular, Gliese 581d, was thought to lie at the outer edge of its star's habitable zone. With the new definition, though, it falls almost smack in the middle, making it perhaps a better candidate for extraterrestrial life.

"That will be a big change for that particular planet," Méndez said. "That means the prospects for life on the planet will be much better."

The researchers detail their new habitable zone definition in a paper to be published in an upcoming issue of the Astrophysical Journal.