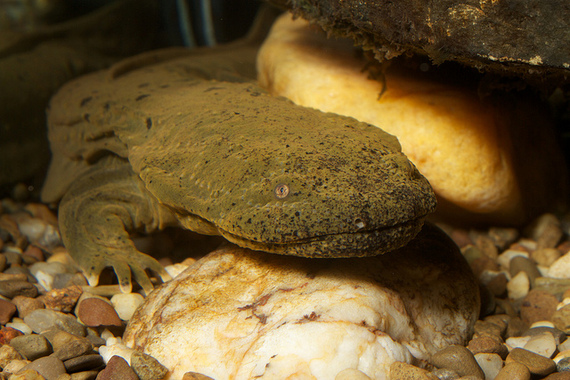 The eastern hellbender (Cryptobranchus alleganiensis) is America's largest salamander. Like many amphibian species around the world, hellbenders are in trouble as human activity has degraded and destroyed their habitat. But hellbenders are getting some help. Thanks to an innovative conservation project spearheaded by the Ohio Division of Wildlife along with Toledo Zoo and other partners, the future of these slimy, prehistoric-looking creatures is looking a little brighter in Ohio.

Growing to a length of up to two feet, these mottled brown salamanders are fully aquatic, living permanently in clear, swift-moving streams. Though broadly distributed throughout the Appalachian region from southern New York to northern Georgia, with populations in Kentucky, Ohio, Indiana, Illinois, and Missouri, their stream habitat is under threat and the species has steeply declined. 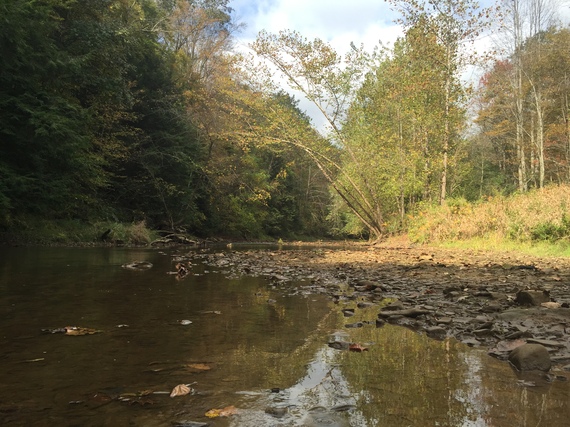 Hellbenders have strong legs to crawl around on stream bottoms and a large tail used to swim against robust currents. They also have folds of skin on their sides to increase their surface area, maximizing oxygen absorption as they primarily breathe through their skin (they use their lungs for buoyancy rather than for breathing).

Hellbenders spend most of their time under large rocks with little cave-like openings. They feed on invertebrates such as crayfish, insects and snails but will also munch on small fish. Hellbenders are very territorial and will fiercely defend their rocks against other hellbenders or fish. 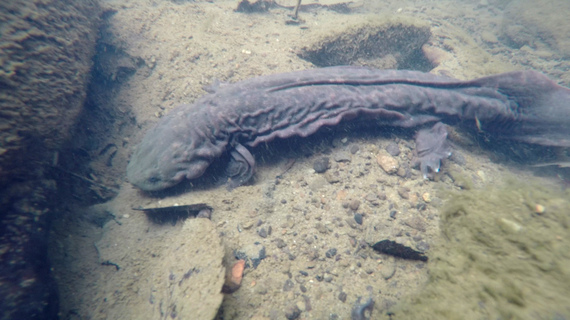 Since these animals need quality underwater rocky habitat, siltation is one of their biggest enemies. Siltation occurs when trees are cut down along stream and river banks and significant soil erosion occurs, spilling sediment into the water. This sediment fills in the crevices under the rocks and reduces quality habitat for the hellbenders. In addition, heavy mining also pushes soil into these streams, which reduces water quality. As a result, hellbender populations have declined significantly in recent decades.

In response to this decline, conservationists have stepped in to help the hellbender. I spoke with Justin Grubb, biologist with the Toledo Zoo (and recent winner of NatGeo WILD's "Wild to Inspire" film competition), who shared this video about a great conservation project to help these fascinating salamanders in Ohio.

Photos by Brian Gratwicke via Flickr Creative Commons and by the Toledo Zoo.