They're power posing in the ladies' bathroom. They've got that positive visualization thing down like nobody's business. But they also keep in mind these subtle strategies when they really need to shine.

1. They Actually Don't Keep Calm and Carry On

When people are already experiencing pre-performance jitters, found Alison Wood Brooks, a professor and researcher at Harvard Business School, it's much easier to shift into a state of excitement than calm. Brooks did a study with participants in several high-stress scenarios: karaoke singing, public speaking and math performance. Those who told themselves "I'm excited" before their anxiety-provoking tasks consistently outshone, and felt better about their performances, than those who told themselves, "I'm calm." Think about it: It's easier to trick ourselves into thinking we're psyched about something that scares us because the physiological symptoms are so similar: sweaty palms, thumping heart, the release of the stress hormone cortisol. Brooks said that when her subjects were told to get excited, they actually felt more excited, more confident and were able to more naturally shift their focus on the positive opportunities in the upcoming task (unleashing their inner Celine Dion) versus the potential threats (completely bombing in front of all of their friends). "Instead of putting up signs that say, Keep Calm and Carry On," said Brooks, "people should use signs that say, Get Excited and Succeed."

2. They Understand the Power of a Pair of Dirty Socks

Well, sort of. Serena Williams has said she'll wear the same exact pair of socks when competing in tournaments. Beyoncé has an hours-long pre-stage ritual that involves prayer, stretching and listening to her favorite music. And motivational speaker Tony Robbins says 10 minutes of high-energy movement and repetition of incantations helps him take the stage with the confidence he's known for.

Some of the greatest artists, athletes, novelists and thinkers of our time have relied upon their own quirky pre-performance rituals to help them get in the zone -- and produce their best work. A study from Germany's University of Cologne confirmed that these symbolic behaviors and good-luck tokens work because they help strengthen confidence in our ability in moments when we're feeling our most uncertain. In her own research, Brooks found there's something tangible behind these wacky routines: "Even when the ritual is composed of a random set of steps that someone else tells you to do -- 'draw a picture of how you feel, pour salt on your drawing, crumple it up, throw it in the trash' -- rituals reduce the heart rate and improve subsequent performance."

Chronically over-apologizing can be a dead giveaway that our confidence is flagging. Still, not all superfluous apologies are made equal. Brooks' research found that apologizing for circumstances that are obviously beyond our control ("Sorry you ran into traffic") actually demonstrates empathy and increases people's trust in us. In one the study's examples, 47 percent of people lent a stranger in a busy train station their cell phone if the request began with an apology about the crummy rain. When no apology was given? Only 9 percent handed it over. "Women shouldn't feel insecure about issuing superfluous apologies," Brooks says. These particular expressions of regret build people's trust in us. That makes them like us more. And that builds our own self-confidence in our interactions with them -- what scholars call an "upward spiral effect."

4. They Distract Themselves in This Key Way

You know the feeling: It's that prickle of heat up your neck, the knot in your stomach when you're asked to talk about your successes during a performance evaluation. We all know that flush of discomfort strikes most women (social norms, unconscious bias, etc.). But there's a way to outsmart the anxiety that keeps us from bragging. In her new study, Jessi L. Smith, professor of psychology at Montana State University, asked a group of female college students to write scholarship application essays -- the mother of all boasting. Half the group was told they might feel some physical discomfort because of a (bogus) subliminal noise-generating box in the room. The other half was told nothing of it. The result: The students who were warned about the box wrote stronger essays, that awarded up to $1,000 more in scholarship money, than the other students. They also enjoyed the experience of writing about their achievements more than their counterparts. Smith said that when women give themselves a way out of the discomfort of self-promoting -- they not only do it more effectively -- they dramatically improve their confidence and performance. The long-term solution, Smith says, is to get employers to create a more balanced environment: one that normalizes self-promotion for women. While we anticipate the world will change (eventually), in the short-term, try this life hack: Before you'll need to brag, get your heart rate up by running up the stairs or playing a pumping techno song. You'll be able to blame your racing heart and jangled nerves on those activities and perform at the top of your talent. 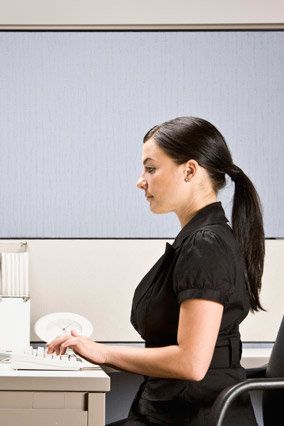 1 / 11
If you have... 1 second:
Sit up straight. Research suggests that people with good posture have more confidence in their thoughts than slouchers.
Thinkstock