Remember when it was shocking to suggest banning all Muslims from entering the U.S.? When the idea of a wall on the Mexican border was the punch line on a critically acclaimed comedy show? A lot has changed in just a few months, including a lot about what we find acceptable to say. And that's something we need to reflect on.

Some on the left are beginning to suggest that openly expressed bigotry is an improvement. Republicans have been dogwhistling about race for generations, from states' rights to Willie Horton to the War on Terror. Better that the mask is off now, and we can really see what we're dealing with. 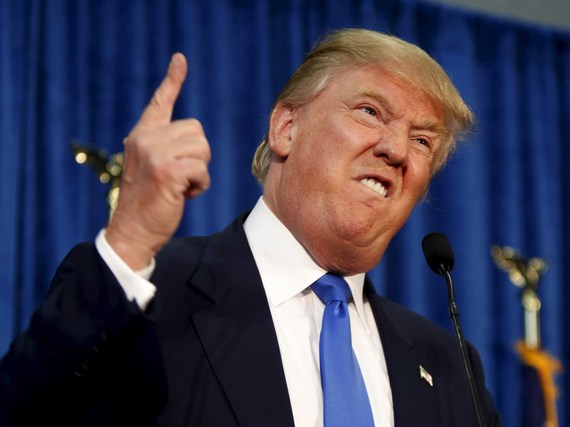 This is a tempting, and almost reassuring thought. But it fails to take account of the way that every one of these once-shocking utterances changed not just our political discourse, but our standards for acceptable conduct. Mary Kate McGowan has argued in a series of powerful articles that every utterance we make, in at least a small way, changes our standards, at least for a conversation. Once I say that my son likes to play the guitar it no longer makes sense to ask if I have children. And some utterances, McGowan maintains, change our standards even more: openly racist utterances, unchallenged, make racism acceptable, at least for that conversation. A political campaign is a national conversation, so if McGowan is right we should be very concerned about what is said, and what comes to be seen as acceptable.

But things cannot be this simple. Although a majority of white Americans harbor what psychologists call racial resentment, they are nonetheless very committed to the ideal of not being racist: this is known as the Norm of Racial Equality. This means that openly racist utterances won't always be so smoothly assimilated. So how does change take place? This is not unrelated to the more general problem of making sense of what we see in the Republican primary these days: what happened to the ideal of not being racist?

What happened, I think, is that we (as a society) are gradually shifting our views about what's required to not be racist -- and this shift is one that should concern us all. One reason this shift has been possible is Donald Trump's skillful employment of what I call 'racial figleaves' -- utterances added to openly racist ones, providing just enough cover for the audience to believe that nodding along does not make them racist. When Trump called Mexicans rapists, he famously added the bizarre caveat that "some, I assume, are good people"; when he called for a ban on Muslims, he noted that this would be just "until we can figure out what is going on". This caveat served as a figleaf -- allowing supporters to reassure themselves that Trump (and they) are not racists. (A day spent on pro-Trump online forums confirmed to me that utterances like this are playing exactly this role in defending Trump against accusations of racism.) Obviously the figleaf didn't work for everyone. But for the sizable number on whom it worked, being non-racist became capacious enough that it didn't rule out believing Mexicans to be rapists. And this should concern us all.

But there's also a further phenomenon taking place. Because the figleaves have allowed Trump's openly racist utterances to be accepted by a large quantity of voters, we are getting used to hearing utterances like them from not just Trump but, crucially, others. A key effect of this is that utterances that are just slightly less racist come to seem acceptable. So, for example, a ban on Syrians comes to be seen as a moderate position once the ban on Muslims has been proposed.

And openly hateful utterances are an important step along the road to hateful acts. Lynne Tirrell, writing about the words of the Rwandan genocide, notes that "as people get used to this new disregard, non-linguistic disregarding actions become more widely accepted". We are already seeing violence at Trump rallies, and in the name of Trump. When we, as a society, change what we count as acceptable discourse, we need to realize that we may be legitimating more than just hateful language.

When I first moved to Europe from the U.S. twenty years ago, I was surprised to find widespread laws against incitement to racial hatred. But these laws are the product of up-close European experience with where such incitement leads. Importantly, though, such incitement doesn't begin with the Final Solution. It begins with habituation to increasingly hateful speech. This is what is happening in the United States right now. And we have to find a way to stop it.

Professor of Philosophy, University of Sheffield