It was time for some cleaning out of files to remind me of a pet peeve and how hacks (journalists) and flacks (public relations pros) often need immersion courses in geography.

The February 2008 printout I found in an old folder from www.regrettheerror.com hit on two glaring errors picked up by Craig Silverman.

It seems the Los Angeles Times had published a commentary in which the writer referred to "Somalia's Darfur region" when he or she should have said Sudan's Darfur region.

Apparently Ethiopia was also misspelled in the headline as Ethiopa. 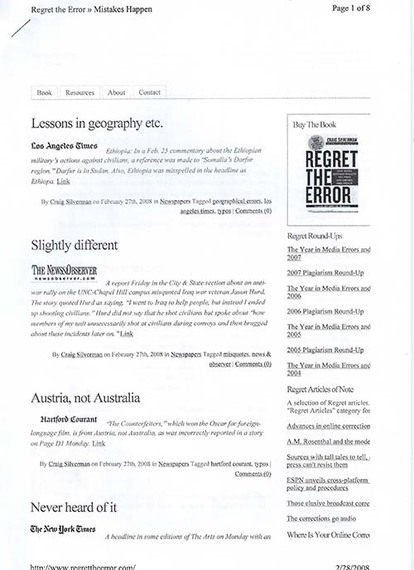 In another priceless mistake, Silverman took the Hartford Courant to task for reporting on "The Counterfeiters" as an Oscar-winning foreign film from Australia, rather than Austria.

Whether it's neighboring African states or countries with somewhat similar names but continents apart, it's absolutely inexcusable.

For some reason I can no longer find the source of these lessons in geography online. The link transfers me to the Poynter Institute with the message "Access denied. You are not authorized to access this page." 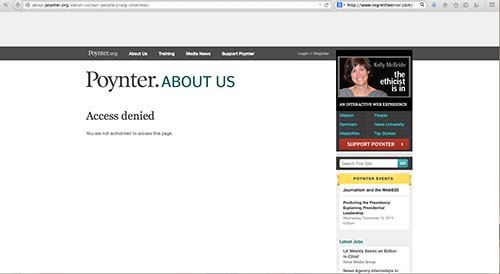 This, and more recent examples, would provide invaluable advice to all journalists.

But it's not just journalists who need a map and whose knowledge of where countries and people are that leaves something to be desired.

Many PR pros are oblivious to the locations of cities, countries and continents, separated by seas and oceans, and yet they don't hesitate to inundate us with all manner of immaterial content.

PR people: Journalists need you, but don't necessarily like you. They wish you'd stop pestering them with pitches that have nothing to do with their beats. And many would rather dig ditches than do what you do.

I couldn't stop laughing when I read this lead to "What Journalists Really Think of PR People" in the New York Observer earlier this month.

Very amusing were the journalists' comments on what got on their nerves the most about PR pros: they pester people with news that is irrelevant to reporters' beats; they don't know how to take no for an answer; they target the same outlets with their best stories and peddle mediocre ones to everyone else; and they can't spell.

What the journalists didn't say was that certain PR pros' inattention to detail, their robotic and mindless targeting of messages to, and assumptions about, recipients' locations were equally laughable.

I'm on the receiving end of such messages, most of which I ignore, or glance over, then ignore.

Yes, I've been a Huffington Post blogger since 2007, and have been a journalist for a lot longer, but I don't cover a beat as a reporter or a foreign correspondent as I once did.

In fact I shifted gears 20 years ago, delved into academia for a while, then hung out a shingle, got into training Arab journalists, and have been taking on consulting and writing/editing gigs for assorted and sundry, but mainly focused on the Middle East/North Africa region. It says so on my website.

But that hasn't deterred PR peddlers from sending me releases and pitches about so-and-so becoming the first Spanish star to host an international talk show, about rock group KISS having a new photo app, about a request for coverage as retailers begin early Black Friday shopping incentives, and about New York sailors returning after completing a nine-month deployment.

There's the endless U.S. political campaign drivel and all manner of hucksterism begging for attention.

The most amusing messages are the all expenses paid invitations to attend tours, meet with experts and visit startups, business operations and other attractions.

Last month I replied by saying I wasn't sure John Doe (not his real name) wanted to invite me to (U.S. city) for a tech and innovation tour as his guest for "exclusive, first-time access to the R&D behind some of the world's most respected brands."

Absent of a policy prohibiting you from accepting, all travel expenses will be covered, including airfare, ground transportation, hotels and meals. In addition, we can help you to identify and arrange separate one-off meetings with any other xxx-based companies you might want to explore.

I went on to explain that I live in Lebanon (the one in the Middle East, not the one in Pennsylvania where they make baloney). That's an ocean and a sea away - two overseas flights for starters.

He was very nice and willing to make an effort to get me there, provided I wrote about what I saw, but his superiors' jaws probably dropped when they found out where I was and what the price tag would be.

Which brings me back to geography and knowing one's audience.

Did John Doe really check me out, or did he just do a quick search about people who write or blog and tweet about a certain subject?

In an increasingly globalized world, albeit with local interests, where stories often break on social media before anyone has time to breathe, journalists and PR pros can't afford to be "geography challenged."