Even if you don't know what a hackathon or a Startup Weekend is, you've surely heard of Top Chef. The idea is the same: throw a bunch of talented and driven strangers together, apply extreme pressure, and watch magic happen. I watch Top Chef here in France (very stressful!) and, last weekend, I had an extreme creation experience of my own at MediaLab Session, a uniquely French take on the Startup Weekend marathon model. Our mission: to "imagine the media of tomorrow..."

In case you're wondering, hackathons are generally about software programming, and the goal is to produce a working app or platform after a marathon coding session. Startup Weekends are about creating an online company (or nonprofit!), with working software plus a business model (nonprofits need those too).

The first thing that happens at these events is that people with ideas pitch their projects to the whole group and then have a very short time to put together a viable team (business types, developers, designers, etc.). If they manage to recruit team members, they get straight to work. Three days later, their projects are already well on their way to becoming a reality. At the end of the session, there's a final pitch/demo and a winner.

MediaLab Session was created by a young French journalist, Romain Saillet, in 2012. What makes MediaLab Session so unique and so specifically French? Well, it's unique in that its focus is exclusively on creating a media startup: anything from a Web TV show to an online magazine or anything else you could imagine as a media channel. So, unlike at typical marathon weekends, most of the projects were pitched by journalists and bloggers. I found it particularly refreshing that about a third of the participants were women, and more than half of the final teams were led by women; proportions you rarely see at typical code- or business-focused weekend hack events.

It's not at all surprising to me that such a model would be Made in France either. The French seem to hold their media to a higher standard than Americans do. They are much more conscious than Americans of the media's role -- and responsibilities -- as the fourth estate. The French produce more magazine titles per capita than any other country in the world, and the French government heavily subsidizes print media. The French prize the arts and political awareness, so the media, the vector for this information, are necessarily valued. Frank Zappa once said "Politics is the entertainment branch of industry." I think, in America today, that the media are little more than the entertainment branch of politics...

(Disclaimer: My team won at MediaLab Session. There was no monetary prize, or prize with monetary value.)

I participated in MediaLab Session in order to experience firsthand the dynamics of one of these marathon sessions. I thought I'd test a couple of ideas I've had for a while, write about the weekend, and maybe even be present at the birth of something really fresh and new. 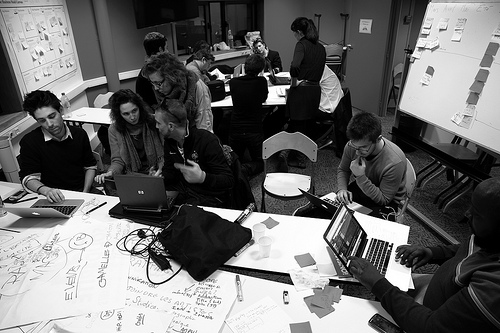 Used with permission, all rights reserved by Sylvia Fredriksson

I pitched an idea for a classic online magazine for a specific niche, plus a new payment model. A young developer/designer was interested in the project, and another woman, an HR director who didn't put a team together, decided to work with us.

I knew going in that I work well with constraints and under pressure when I'm alone. But what about when thrown together with total strangers? When you have a choice, you tend to surround yourself with people who are like you. In my situation, there were significant differences in age (25 years), culture (both of my team members were French), and perspective (a young, male developer/designer has a different vision of the world than a couple of professional woman over 40).

It was actually quite liberating. You can take chances you might not take when working with people you know because the strangers you're with have no expectations or preconceived ideas of how you function. No matter what, working with total strangers forces you out of whatever box you were thinking in at the start.

The fact that we had only 48 hours together required us to be extremely efficient in our communication. And dealing with people who have no idea of who the others are or how they think made it even more important to communicate clearly and effectively. The time constraint was also a major driver of audacity. You have no time to reflect or doubt yourself. You go with your gut or you trust a teammate's intuition. I started out proposing 10 categories for my magazine's subject matter. We whittled them down to seven in the first hour of Day 2. I didn't have time to think about whether I should have such-and-such a category and what would go in it. I just axed it. By that same night, we'd decided to discard categories altogether.

Another major factor is the fatigue, which breaks down your resistance in a good way. Day 1 went from 6:00 pm to 2:00 am. Days two and three lasted 12 hours each. It's the same concept as military boot camp (speaking from experience here), but with opposite objectives. In boot camp, they're trying to break down your resistance to authority and make you malleable. In these intensive weekends, the fatigue reduces your assumptions to shreds and breaks down your resistance to new ideas, giving you a virgin outlook on things so the creativity can flow. Nothing is driving you but your personal commitment to the exercise, to your project, and to the team members who are depending on you. My sense of obligation to my team was a major factor for me.

By the last morning, we'd discarded the desktop computer entirely. My online magazine had become a mobile app. Radically different people with no time to fool around came up with radical ideas. All of the pressure and constraints sparked creativity and action. There was not one project that came out of that weekend looking the way it looked when it got there.

I found myself wondering what would happen if you threw a bunch of musicians and composers together for one of these things. Or if you used a hackathon model to confront problems in a community, or in a corporation. Seems like any time you want to shake things up or work things out, it would be worth considering such an extreme option. Maybe our government should try it. Lock Congress up for 48 hours, make them build small teams that don't include their cronies, get 'em jacked up on Red Bull. And see what they can do...