Once a hacker controls the device, the device's owner is the next target. So everything on your computer - pictures, documents, contact lists - are at the hacker's mercy. But that's just the beginning. With the RAT downloaded, the hacker can do whatever they want with your computer - take pictures with the webcam, record conversations, even send emails - in your name - from your computer.

Hard to believe this could happen? Perhaps even harder to believe is that ratters post these videos on YouTube and make money on them. That's right, this subset of hackers, known as ratters, turn their exposed victims into click-bait and can make thousands of dollars sharing their victims with the world.

Think it can't happen to you? Talk to former Miss Teen USA Cassidy Wolf. After a ratter took control of her computer, she was completely unaware that someone was watching her every move in her home for months. The ratter would eventually harass and threaten her, sharing the videos he made without her knowledge or permission. These ratters need to be held accountable.

Where do ratters live? In their newest investigation, the Digital Citizens Alliance (DCA) found ratters mocking and belittling their victims on YouTube. Not only do the ratters share the faces of victims, but they also provide "tutorials" for others on how to get victims. In fact, the DCA found posts from the hackers' chat room, HackForums, describing how to use YouTube to spread RATs. This malware would allow the ratters to take control of electronic devices and attack the users without their knowledge.

These RAT tutorials are just a few clicks away from the impressionable eyes of our children. Research shows that 93 percent of teens visit YouTube weekly.

Quietly last week, YouTube pulled down more than a dozen videos discovered in the DCA research. Several of those video tutorials included the faces of women and children, the victims of ratters' attacks.

But there are hundreds, maybe thousands, of videos still up on YouTube now. And many of these videos include advertisements from brands we know and trust. So not only are ratters using YouTube to spread this malware scourge, but there is the potential for Google to share ad revenue from these videos which promote illegal activity. This is a very disturbing revelation that leaves many curious about how this could be possible.

In a sample of nearly 200 RAT tutorial videos on YouTube, Digital Citizens researchers found approximately 40% had advertising running alongside. The report highlights an example where a ratter is spying on a young girl from Australia who has no idea she is being watched through her web cam, complete with an ad for Acura right next to it. 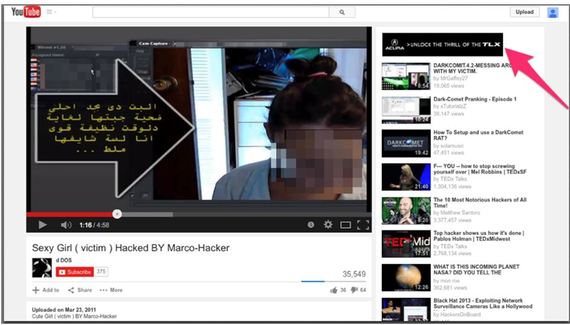 (This video was up on YouTube for three years and viewed 37,000 times. Note the Acura ad in the upper right corner).

What can we do about this? YouTube continues to ask us, the public, to flag these videos when we see them (which could be too late for some victims), however when we have such a serious issue, it is clear that this policy of public reporting is simply not working. It is time for YouTube (Google) to monitor its platforms for all illegal activity, especially when it is serving ads on those videos. It is not enough to arbitrarily police activities that are both illegal and reach a given threshold of reprehensibility, like child pornography. Google should assign a human team to review these videos and it should do so immediately.

Adam Benson, DCA's Deputy Executive Director, urges everyone, including the paid advertisers to consider the safety risks of not only the youth, but of the elderly too. Benson said:

"Ratters don't need any help getting victims, but they stand to make money from the RAT tutorials posted on YouTube. We found hundreds of tutorials with ads from well-known, respected companies. I doubt these advertisers wanted their products posted next to bad actors on YouTube. We see no reason for YouTube to monetize videos that show the faces of victims and IP addresses from hacked devices. We can't imagine that the money made from ratter tutorials is worth the pain and suffering the victims experience."

It's time YouTube takes immediate action too. We need to protect our young people and seniors, all of whom are vulnerable online. It is time for YouTube to put its money into safety, rather than in the pockets of ratters. Hire a human team to help screen these videos for immediate removal.

Waiting for a flag alert after slaves have already been sold could be too late.