The crime that Americans fear the most is having their credit card information stolen by hackers, according to a new poll.

A Gallup survey published Monday found that 69 percent of U.S. residents worry “frequently” or “occasionally” about computer hackers stealing their credit card information from stores. Target, Neiman Marcus and Home Depot are among retailers that have recently experienced massive breaches.

The second most-feared crime in America, according to the survey, is having a phone or computer hacked to steal personal information. Sixty-two percent of respondents said they worried at least “occasionally” about it.

The two hacking crimes are far more worrying than home burglaries, car break-ins or muggings, according to the poll. That may be because so many people's information has been hacked, Gallup said.

Gallup said 27 percent of Americans said they or a member of their household had their credit card information stolen from a store. Last year, Target experienced the second-largest hack in history when criminals stole information from about 40 million debit and credit cards.

Here are the top crimes that have Americans "occasionally" or "frequently" worried, according to Gallup's new poll: 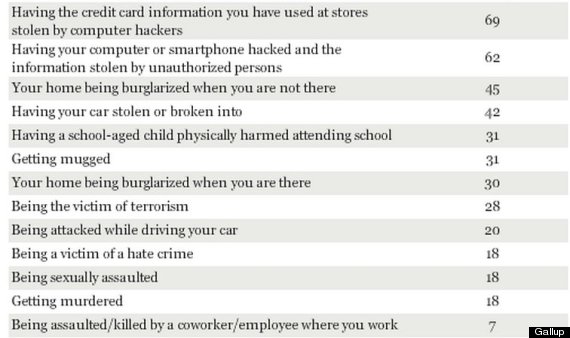 Since the Target breach, a string of other retailers have been hacked, exposing the financial information of tens of millions of U.S. consumers. Some of the cyber-crime is suspected to come from Eastern Europe and Russia.

Such large-scale security lapses, especially during the holiday season, affect the economy in numerous ways. Customers steer clear of companies that have been hacked, for example, such as Neiman Marcus or Home Depot. And consumers may be less likely to use debit cards and credit cards in the future, opting to spend cash instead, Gallup said.

The new statistics are part of Gallup’s latest annual crime poll, which the company conducted by calling more than 1,000 Americans from all 50 states on Oct. 12 to Oct. 15. All respondents were over the age of 18.