We certainly give songwriters plenty of leeway when it comes to their songs being "true to life." No one hears "Yellow Submarine" and then criticizes Paul McCartney for the Beatles not actually living in a yellow submarine. Similarly, if you were to learn that Rupert Holmes did not actually like Pina Coladas, I don't think anyone would judge "Escape (the Pina Colada Song)" too harshly (do note that Holmes actually is not a fan of the tropical drink, noting in the past that he felt it tasted like the medicine Kaopectate). But surely the people who wrote "Take Me Out to the Ball Game" had actually attended a baseball game before they wrote the song, right? 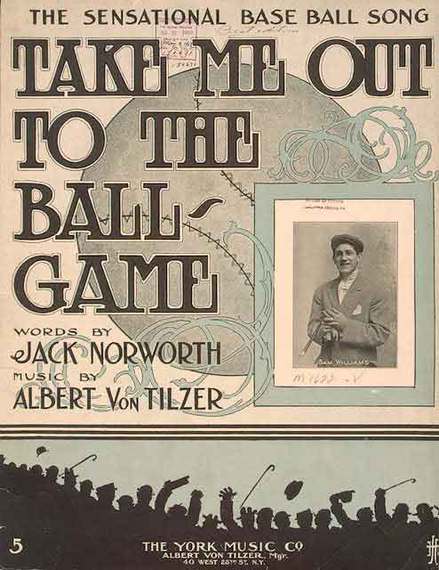 Baseball has been tied with other forms of popular culture pretty much as soon as the game began. By the turn of the 20th century, dozens of songs and poems had been written about the game of baseball. Clearly the most popular of them all was Ernest Thayer's 1888 poem, "Casey at the Bat: A Ballad of the Republic Sung in the Year 1888," which practically became a cottage industry in and of itself, in terms of publications and recitations of the poem. The poem was a popular vaudeville act, where noted baseball players of the era would recite the poem (the most famous vaudeville act of this kind was Michael Joseph "King" Kelly, a late 19th Century baseball star -- and a 1945 inductee into the Baseball Hall of Fame). One of the more popular tunes was a song called "Uncle Josh at a Baseball Game," which was released a number of times between 1897 and 1909.

1908 was a particularly popular year for baseball songs, likely due to the New York Giants. The Giants had been fairly moribund in the first few years of the 20th Century in their home at the Polo Grounds (which they moved into in 1891), finishing seventh or worse from 1898 through 1902. In 1903, though, the team (led by star pitcher Christy Mathewson) turned things around and came in second place. In 1904 and 1905 they were first in the league, winning the World Series in 1905. They were competitive in 1906 and 1907, but 1908 was one of the great pennant races of the 20th Century, with the Giants falling to the Chicago Cubs by a single game -- a gap that is forever associated with Fred Merkle missing second base at the end of a game, nullifying a Giants victory. "Merkle's Boner" will always have a place in baseball history. The fervor fans had for the Giants that year made it unsuprising that the songwriters of Tin Pan Alley put out a number of songs about baseball that year and the next, including "Flanagan and The Reillys at a Baseball Game," "The Tough Kid on the Right Field Fence" and "The Baseball Girl."

The most famous song of that year, though, began as lyrics by Jack Norworth, one of the biggest songwriters and vaudeville stars of the day. Norworth was credited at the time (history has shown us a few people dispute this claim) with writing the smash hit "Shine On, Harvest Moon," which was sung by its alleged co-writer, Norworth's then-wife, Nora Bayes, who debuted the tune in Florenz Ziegfeld's Follies of 1908. 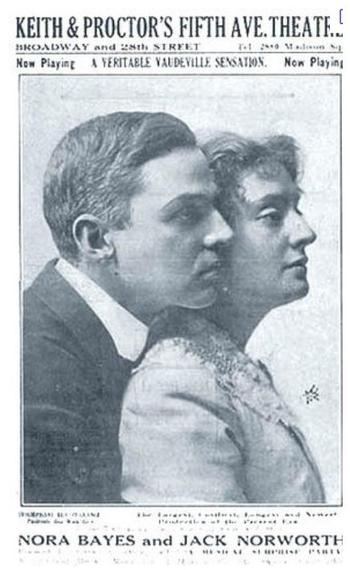 In the summer of that year, Norworth was looking for a tune for Bayes to sing in the Revue when he came across a sign while riding the subway. It was an advertisement for a Giants game at the Polo Grounds -- "Baseball Today -- Polo Grounds." Not the most elaborate of ads, but it was enough to inspire Norworth. You see, what has somewhat been lost to history is the fact that baseball in the first decade of the 20th Century was something that women attended with some regularity. Years of "ladies days" at baseball parks had paid off, and in fact, in 1909, the National League ceased the promotion, under the theory that they no longer had to offer incentives to get women to come to baseball games. The legendary George M. Cohan also penned a tune in 1908 titled "Take Your Girl to the Ball Game," so it was quite established in popular culture that women were interested in baseball.

So that certainly was what Norworth had in mind when he penned the lyrics to a new song for Bayes to sing. What is often forgotten about "Take Me Out to the Ball Game" is that the famous lyrics are only the chorus of the song. The actual song is framed about a young Irish woman, Katie Casey, who doesn't want to go to a show -- she wants to go to a baseball game!

Here are the original lyrics:

Katie Casey was base ball mad.
Had the fever and had it bad;
Just to root for the home town crew,
Ev'ry sou Katie blew.

On a Saturday, her young beau
Called to see if she'd like to go,
To see a show but Miss Kate said,
"No, I'll tell you what you can do."

"Take me out to the ball game,
Take me out with the crowd.
Buy me some peanuts and cracker jack,
I don't care if I never get back,
Let me root, root, root for the home team,
If they don't win it's a shame.
For it's one, two, three strikes, you're out,
At the old ball game."

Katie Casey saw all the games,
Knew the players by their first names;
Told the umpire he was wrong,
All along good and strong.

When the score was just two to two,
Katie Casey knew what to do,
Just to cheer up the boys she knew,
She made the gang sing this song:
(repeat chorus)

Norworth had Broadway composer Albert Von Tilzer put the lyrics to music, and the song was published in 1908.

Years later, in 1927, the two men would put out a revised version of the song, with Katie Casey now becoming "Nelly Kelly."

Nelly Kelly love baseball games,
Knew the players, knew all their names,
You could see her there ev'ry day,
Shout "Hurray," when they'd play.

Her boy friend by the name of Joe
Said, "To Coney Isle, dear, let's go,"
Then Nelly started to fret and pout,
And to him I heard her shout.

Amazingly enough, though, at the time they penned the song, neither Norworth or Von Tilzer had actually been to a baseball game!

The two were honored at a July 1940 Dodgers game, which was the first baseball game for Norworth (Von Tilzer might have attended a game around the time of the second version of the song, maybe not -- I can't seem to pin it down). Norworth would eventually become an avid baseball fan, especially as he kept getting honored for the song (fiftieth anniversary, etc.).

Norworth passed away a year after the song's 50th anniversary. He lived long enough to appear on Ed Sullivan's television series!

Be sure to check out more baseball legends at Sports Legends Revealed here.