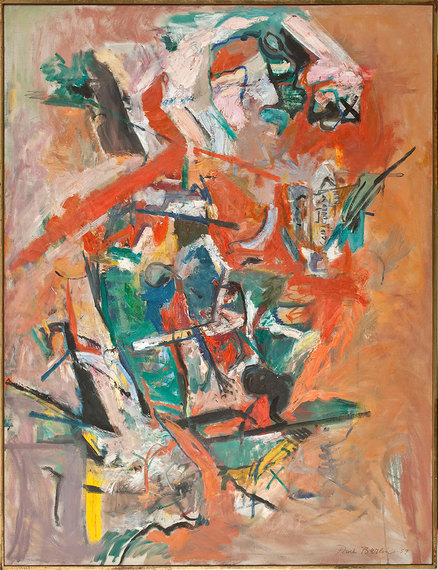 Paul Burlin played an odd role in abstract expressionism - indeed, in American art as a whole. His best known work is clearly abstract expressionist, but, for all its painterliness, is far less gestural than other work of its ilk; indeed, it seems energized less by its gesturality per se and more by its symbolic, or at least notational, characteristics, putting it in closer relationship to the early symbol-ridden work of Rothko, Gottlieb, et al - except that it is visually far subtler and more complex, evincing the influence of Kandinsky as well as Picasso, and also made a decade or two later. Such paintings of Burlin's in fact constituted his last bodies of work, preceded by decades of figuration that often took on avant garde (for America) flavor. A generation older than most of the abstract expressionists, Burlin was included in the 1913 Armory Show and worked in Santa Fe and Paris before returning to his native New York in the mid-1930s. By that time he had practiced realism, cubism, futurism, and Matissean fauvism, and was coming to embrace surrealism in his own way. He did not take up pure abstraction until after the Second World War. Some of Burlin's earlier, smaller-scale, relatively rare figurative work was featured in this small survey, but, appropriately, his larger abstract work, with its agitated brushwork, vivid palette, and bold but carefully considered and intricately interlocked forms dominated the selection, in number and in impact. Burlin's late work proves especially captivating for the energy it radiates even as it keeps a graceful formal equilibrium; the scumble of the paint, often reaching fever pitch, never knocks his complex formal relationships off balance. If anything, the paint handling works vigorously to keep things in place and visually coherent. No formal decision seems arbitrary, artificial, or accidental, and yet every form and color feels at liberty. (Peyton Wright, 237 E. Palace Ave., S. Fe. www.peytonwright.com) 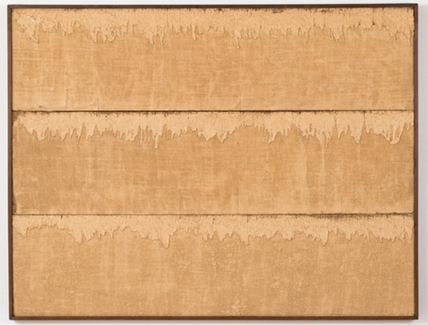 The welcome reclamation of non-European-American modernism continues apace, and in cases like South Korea, it focuses necessarily on late-modernist postwar investigations - in this case, "postwar" meaning after 1953. The Tansaekhwa (monochromatic) movement, emerging in the late 1960s and lasting into the '80s, was the first Korean art phenomenon to have an international impact - not least because it seemed timely, even prescient, with regard to Western developments. (As well, one of its proponents, Lee Ufan, went on to spur a parallel movement in Japan.) As demonstrated in "From All Sides: Tansaekhwa on Abstraction," the Tansaekhwa painters manifested a distinctly, indeed self-consciously, Asian take on minimalism and post-abstract expressionist gesturalism, turning the expansive handwriting of Cy Twombly and the painterly monochromatic approach of such artists as Robert Ryman and Raimund Girke into a shared idiom - reclaiming, in a way, the Asian precepts at the root of painterly-minimalist practice and perception, much as Gutai had reclaimed abstract expressionism. The six Tansaekhwa artists represented in this survey determined ways of mark-and surface-making unique to each, and explored those ways exhaustively, the m.o. of late-modernist artist groups that allowed aesthetic solidarity while fostering individual distinction (almost to the point of parodic branding). In the case of Lee, Chung Sang-hwa, Ha Chonghyun, Kwon Young-woo, Park Seobo, and Yun Hyongkeun, however, the stains, erasures, brushy accretions, and calligraphic abrasions - not to mention the exaggerated suppression of color (even in Lee's luminous progressions) - that comprise their extra-painterly surfaces took on an extra-aesthetic urgency. Not only were these artists claiming a place for Korea in the avant garde discourse of their time, but they were claiming a space - for artist and audience alike (according to Joan Kee, the movement's American-based historian) - of expressive freedom. During the group's active period, South Korea was an authoritarian state, and its northern counterpart yet worse. The neutral appearance of Tansaekhwa painting might seem to imply a withdrawal from sociopolitical engagement, but in fact it embodied an active rejection of submission to state and corporation alike, insisting instead on the role of the individual in the context of group expression. In Europe, monochromism is called "radical painting"; in Korea, it was truly radical - and in its intense, extreme realizations here it looked, and felt, it. (Blum & Poe, 2727 S. La CIenega Blvd., LA. www.blumandpoe.com) 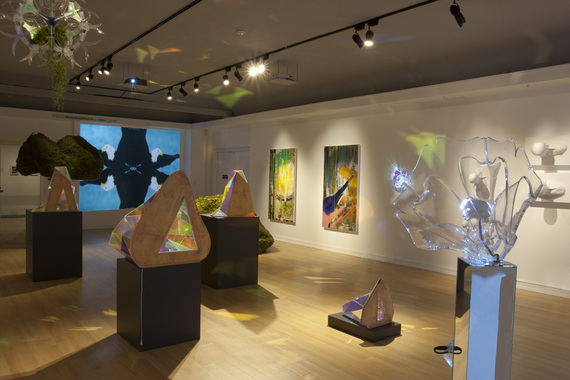 Miri Chais, an Israeli artist recently relocated to Los Angeles, works with a blend of digital and analog technologies, from on-line feeds to paint, to create objects - and in this case, an immersive installation - that symbolize, or at least metaphorically embody, the present-day transition of our consciousness. There are, not surprisingly, many artists at present addressing this very topic, in all its breadth and urgency. Chais is not even alone in the high level of lyric beauty she maintains in her constructions and projections. But her approach is remarkable in its restrained lushness - its seductiveness unfolds gradually, piece by piece - and in the fine line it treads between the tactile and the virtual, the linguistic and the somatic, the imagistic and the purely, abstractly luminous. Although the installation at USC was clearly a sum of parts more than an entirety, this sense of accretion gave a picaresque quality to the room, wherein one could move from object to object and experience a different combination of shape and image, solid and atmosphere, information and sensation. Chais also activated her surrounding with a gentle musical soundtrack (provided by her son, a composer), replacing the cacophony of discrete, competing sound sources one has come to expect in such electronicized spaces. And, interestingly, the bulk of the objects comprising the installation conjured the natural world - some hanging "clouds" covered in artificial grass, some image-filled, pedestal-mounted objects resembling crystals - at least as much as they did the world of information. Figural imagery, including x-rays, also figured in the mix, rhetorically anchoring the media mix in human experience; this might sound like a superfluous conceptual gesture, but it grounded the visitor in an otherwise nebulous environment. (USC Fisher Museum, 823 Exposition Blvd., LA. www.fisher.usc.edu)