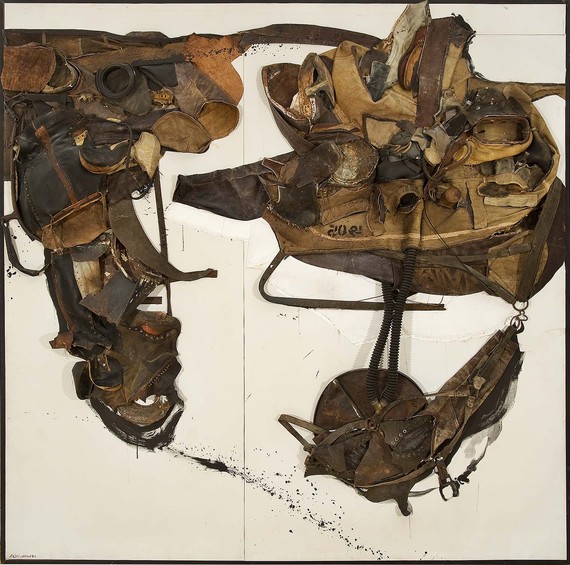 Nancy Grossman's best known work is centered on the human head and face, but her transition to those leather masks of hers was marked by a period of equally intense, but far more abstract - and, in the context, even bolder - canvas-mounted assemblages, also predominantly leather and metal, and free-standing constructions. Although these aggressive objects bear many of the earmarks of their mid-60s moment (they speak notably to contemporary work by Lee Bontecou, Eva Hesse, John Chamberlain, nouveau realisme, and many other assemblagic oeuvres), they look and act like none of that moment's movements, except to address the viewer with similar force, dark humor, and mystery. This is a startlingly strong and confident body of work, tough, sensual, and tragic, and one wonders why Grossman wasn't recognized first for these; indeed, next to them the figural fantasies that did gain her accolades might seem self-contained and even predictable. That's hindsight, of course; in its day, Grossman's figural work was even less predictable and more startling. But the sheer presence of these hybrid concoctions, explosions of form and material, at once coarse and lyrical, that sprawl across the wall with a deftly choreographed (but never elegant) indecorousness, seems to reflect, embrace, and recoil from the chaos of their century - and no less of ours. Even Grossman's delicately rendered drawings from this period run off in all directions, like animal swarms in a panic. (Michael Rosenfeld, 100 11th Avenue, NY NY. www.michaelrosenfeldgallery.com) 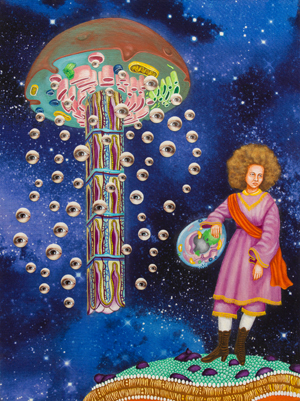 Lezley Saar is at once a highly pictorial artist, centered on the figure, and a highly literary one, centered on the narrative. But Saar treats neither figure nor narrative with much traditional elaboration, much less decorum. Her sense of fantasy, indeed of whimsy, simply won't allow her to. As a result, Saar's latest paintings (which incorporate digital photography), small and vibrant, seem to hybridize various traditions of book illustration, from children's literature to Medieval manuscripts to the marvelous books of the Rajput kings. Certainly, their luminosity, their free play with scale and context, and their focus on the human figure - indeed, very specific human figures (whose identities are for the most part only obliquely revealed) - insist that the observer pick through the various elements, consider their various juxtapositions, and determine motif and motivation equally for the artist and her subjects. This is in fact something of a retreat from the overtly writerly paintings and collages that constituted Saar's previous body of work; her ear for poetry goes missing here, but is replaced by an equally persuasive poetry of the eye. This is even truer in the "Monad" collages, bristling with Dada cheek and Surrealist enchantment and full of wondrous and silly surprises. Here, Saar places herself in a more specific tradition, answering to Joseph Cornell, Hannah Höch, Max Ernst, George Hugnet, and Bruce Conner, but looking like none of them; just as each of those masters could paste together papers not quite like any of the others, Saar can conjure richly colored, almost painterly montages whose opulence, dreamy chattiness, and buoyant sass is all their own. (Merry Karnowsky, 170 S. La Brea Ave., LA. www.mkgallery.com) 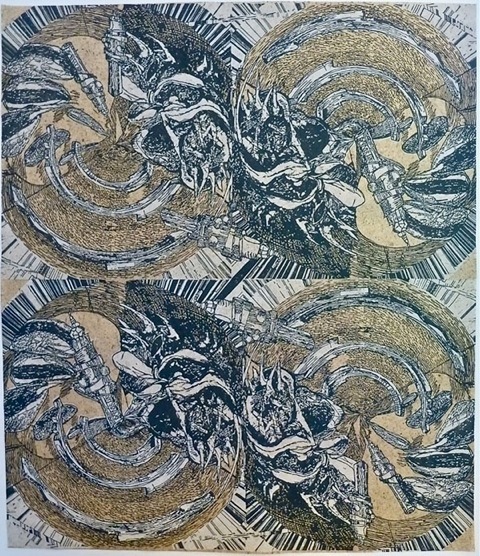 Roxanne Sexauer has been fighting what might seem a rear-guard action against the obsolescence of the fine-art print - heavily, but not solely, on behalf of the woodcut and its related media (linocut, chine colle) - and in this she is not alone. But the richness of vision Sexauer brings to her chosen practice would argue that that action is in fact not so rear-guard. She wrings new, unanticipated, even startling imagery from the age-old woodcut format, finding its dynamic counterpoint of line and space, positive and negative form, a veritable universe of marvelous effects. Out of these effects - often realized through the superposition of idiosyncratic, if carefully calibrated, impressions - Sexauer weaves panel after panel of imagery at once emblematic (sometimes even heraldic) and hermetic. She composes her lines into mysteries of identity and relationship, and even when she depicts something straightforward, such as a flower or a face, a planet or a vital organ, she enmeshes it in a web of intensely described borders and branches. Occasionally Sexauer can lay it on a little too thick, but even here, the print challenges the eye to disentangle the apparent cacophony, and in doing so to decode the information embedded therein. But Sexauer is not simply playing games with our eyes or minds; she is stimulating them into a new appreciation of natural complexity and the richness of the everyday. Like the German expressionists who have so clearly influenced her, Sexauer believes nature is a cosmic force and that we can connect to its vitality through our sight. (Barrett Art Gallery, Santa Monica College, 1310 11th St., S. Monica. www.smc.edu/Barrett/Pages/Exhibits.aspx) 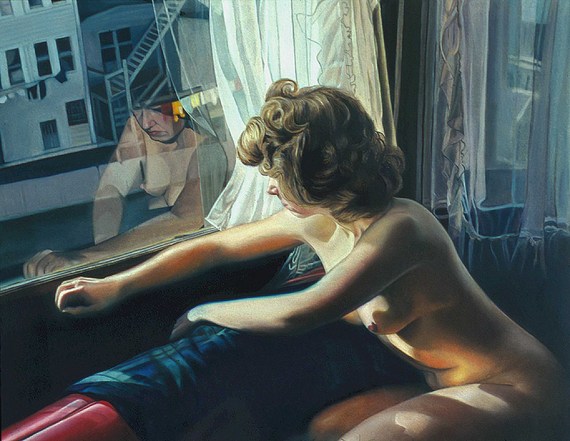 The emergence in America of an assertive classically based realism has not resulted in a re-academicization of representational practice. To the contrary, it has considerably widened the applications of naturalistic figuration. "The Way of Flesh II" (following a similarly themed show - twenty years earlier!) documented this phenomenon with work on paper by 26 well known and emerging artists. Most hail from southern California, where the "new realism" is particularly resurgent; but their claims to national, even international relevance were bolstered by the inclusion of several prominent East Coast realists such as Jerome Witkin and Sigmund Abeles and of one European figure painter, the notorious Norwegian Odd Nerdrum. Strong as these (notably Witkin's two large, typically imposing figures) were, the variety in style, touch, and theme among the Angelenos drove home the message: the carefully wrought human figure can be put to myriad aesthetic and narrative tasks, and can invest those tasks with a visual as well as rhetorical urgency that other depictive means, including photography and digital media, cannot provide. Some artists in the show pay clear homage to their Old Master predecessors, while others substitute entirely modern tropes for those of the Baroque and 19th Century. But freshness and immediacy blew through the entire show, preventing anyone from trapping themselves in mannered anachronism; even those who would emulate the methods of the Academy freshened their approaches with a momentousness born of contemporary life (and, often, contemporary media and techniques unavailable to Rembrandt or Leonardo). This was clearly the result of deliberate curatorial focus, but it drove home the point: naturalism has survived by answering to modern visual needs. The other artists in the show included Sharon Allicott, Juliette Aristides, Steven Assael, Ron Brown, Dawn Butler, Thomas Butler, Wes Christensen, Domenic Cretara, Dirk Hagner, F. Scott Hess, Lared Linge, Pamela Diaz Martinez, Daina Mattis, John Nava, Luis Serrano, Ryan Schroeder, Robert Schultz, Cynthia Sitton, Betty Shelton, Richard Shelton, Thomas Stubbs, Ruth Weisberg, and Peter Zokosky. (Mt San Antonio College Gallery, 1100 N. Grand Ave., Walnut CA. http://artgallery.mtsac.edu)