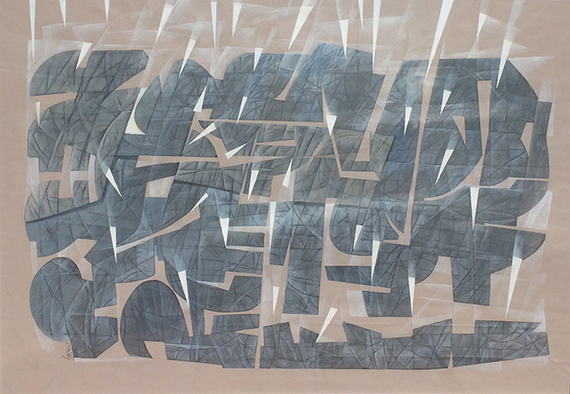 Hossein Khosrojerdi is best known for the work he produced in Iran, digitally composited paintings that spoke to social and political conditions under the Ahmadinejad regime. After that regime consolidated its power in a suspect election in 2009, the writing was on the wall for Khosrojerdi, as for so many of his fellow artists, and he left the country. Khosrojerdi's mummy-like figures were clearly prisoners of some sort (even when depicted in the open), reflecting not simply the actual jailing of so many Iranians, but the spiritual and intellectual imprisonment of the entire country. In a way, though, this subject matter imprisoned Khosrojerdi no less than did the government, the suppression of popular expression compelling him towards such a statement; he fled, finally, not so much because his life was in danger, but because he needed to make art about anything and everything, not just what he was allowed -- or forbidden. And, truth be told, the work he has produced in London, where he has lived for the past several years, is better made and more pictorially engaging. Currently, Khosrojerdi works in two parallel fashions. One captures architectural structures (e.g. the London Bridge, Admiralty Arch) in a dense haze of linear embellishment and pure atmosphere. At its best, this urbanscape manner functions like a tonal Turner, drained of all color and flavored with fog. Khosrojerdi 's other approach, while sharing a limited palette and a reliance on linear, quasi-geometric compositions, works quite differently. Here, Khosrojerdi constructs quasi-cubist forms, at once organic and linear, that hint at plants, landscapes, and (again) buildings. Their spindliness and complexity bespeak a more general sensitivity to the condition of the world, and, reflexively, to the artist himself. The pictures Khosrojerdi has produced this way have the ring of aesthetic, not just political, conviction. (Tara Gallery, 1202 Montana Ave., S. Monica. http://taragallery.org) 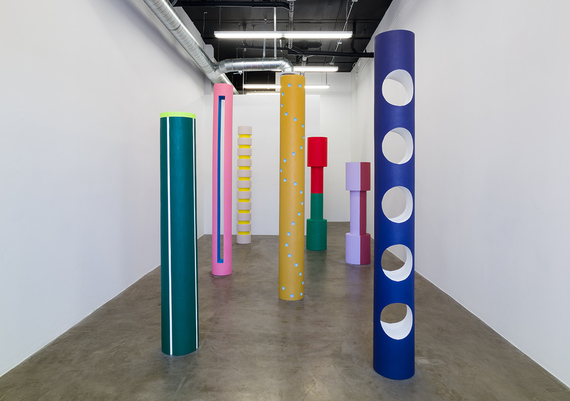 Lisa Williamson has fabricated more eccentric sculptures than these, and one misses the unexpected curves and angles of various works (especially wall-hung pieces) seen previously. But these upright, uptight columns display another side to Williamson's approach, one in which she challenges herself to rely on something else besides weird contours. In fact, it's the very non-weirdness of these seemingly stolid cylinders that powers their appeal; rather than turn acrobatic fillips, they just sit there and perform a less obvious kind of magic, shifting their shapes subtly, turning into flagpoles, slots, clown suits, and all manner of forms, metaphors, and meta-forms. Williamson induces this slow-build giddiness by introducing symmetric but still peculiar deformations -- rows of holes, barbell-like swellings, a tidy incision running the length of the column -- that prove the sculptures' distinguishing features. Add to this their insanely vivid, even hilarious color and color combinations that Williamson has, if anything, amped up from the earlier work, and this troop of dumb logs proves very, very smart. Williamson has picked up on the goofy but foolproof logic of 1960s "pop abstraction," practiced by the likes of Nicholas Krushenick, Knox Martin, and George Sugarman, and (especially in the case of sculptor Sugarman) has reinvigorated it for the early 21st century. (Tif Sigfrids, 1507 Wilcox Ave., LA. www.tifsigfrids.com) 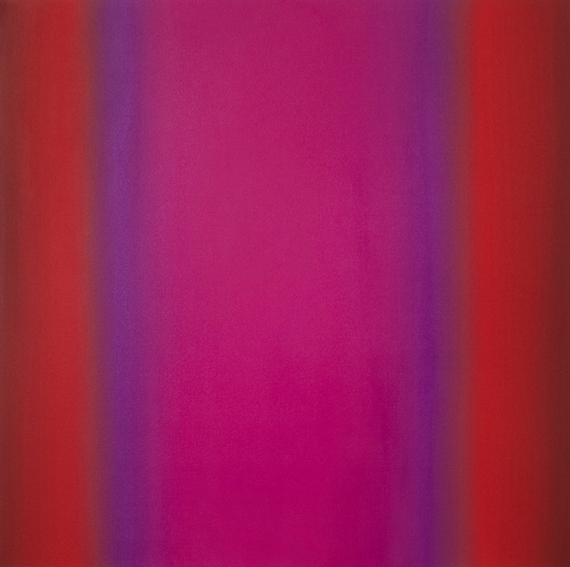 Ruth Pastine paints as purely optical a kind of painting as it is possible to paint. Her work comprises nothing but color and its presentation; that is, her canvases and works on paper, usually square, present our eyes with myriad, closely shifted color modulations, the modulations defined and delineated in vertical bands that occur towards the sides of the paintings and drawings. This columnar banding reinforces the infinite depth -- or, if you would, depthlessness -- of each image's center; but as the eye comes to rest in this center it realizes that relative optical depth is not only indistinct here, but is not even at issue. It is the color itself, its effect as a luminous, vibratory presence and as a spaceless space, that acts upon one's sensibilities -- not just one's eyes. With a tad more subtlety in her tonal shifts Pastine could thoroughly fool our eyes into seeing what isn't there. But what she wants us to see is everything that is there, a far more difficult goal -- and yet one as reachable conceptually as it is improbable retinally. Her reds and blues stay red and blue, rather than shifting into something else (or nothing-at-all invisibility) precisely because they are anchored with modifying hues and modulate as they do toward the wings. Pastine refuses to trick us into the transcendent, but she does everything in her power to bring our eyes to that level with more forthright -- if thoroughly deft and sophisticated -- means. (Brian Gross, 248 Utah St., San Francisco. www.briangrossfineart.com) 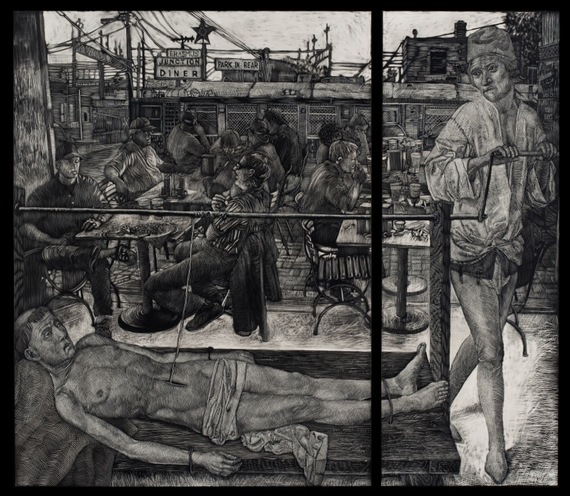 Alice Leora Briggs produces large, dense woodcuts, and works in similar dramatic fashion in an even less forgiving graphic medium based on carving, sgraffito drawing. She commands an often-astounding ability to render figures with veristic -- indeed, cinematic -- accuracy, Never, however, does Briggs produce work simply to show off her virtuosic abilities; she invariably applies them to subjects imbued with their own ferocious intensity. In the case of many of the works here, Briggs -- who lives in Texas not far from the Mexican border -- concentrates on an imposing subject, indeed, one of the most intractable manifestations of cruelty and evil in a contemporary world gone mad. The border town of Ciudad Juarez has become a killing field, a years-long narco-driven murder spree that still holds the city in its grip. Briggs made repeated visits to the accursed place, soaking in its desuetude and finding oblique rays of hope. Elegant in their grit, Briggs' claustrophobic and often chaotic renditions of a suburb of hell maintain a grim beauty that her flawless style finds in its subjects rather than imposes on them. Indeed, the real strength of Briggs' irresistible work is the eloquence of its observations, not (just) of its manner. This becomes even more evident in her non-Juarez work, far more reliant on allegory and traditional trope. Most notably in a cycle of 12 woodcuts based on a poem of as many lines by Mark Strand, Briggs tackles her big subjects -- the biggest being Death itself -- in less reportorial fashion, mixing the modern world with its Biblical and Medieval counterparts to make biting existential commentary on the endurance of human folly. Dürer and Holbein, Kollwitz and Beckmann haunt Briggs' work, symbolic and naturalistic alike; but her Germanic gloom is relieved flickeringly by the lighter-hearted, if even snarkier, shadows of Hogarth and Daumier. These are imposing figures to propose as forerunners for Briggs, but her ambition and her ability to fulfill it warrant, even compel the comparison. Indeed, there may not be another artist working in America today who more convincingly keeps alive such caustic Continental spirit. (EVOKE Contemporary, 550 S. Guadalupe St., Santa Fe. www.evokecontemporary.com)