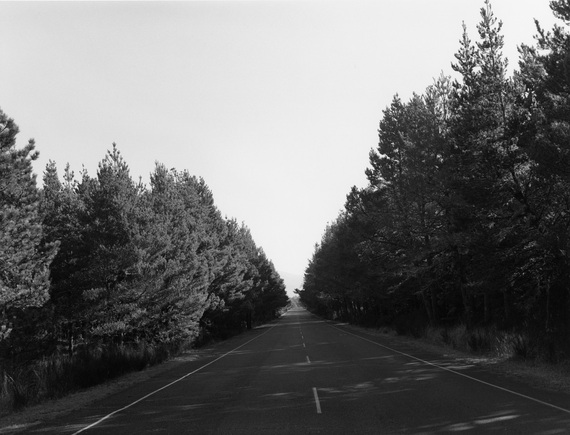 Robert Adams' contribution to contemporary photographic practice, especially in the U.S., cannot be underestimated, no matter its modest appearance or echoes of the private and personal. Adams' polemical relationship to the American landscape, regarding with concern and sentiment but without bias the interjection of human into natural presence, has helped guide the complicated practice known as the New Topographics from its inception some forty years ago. Further, his refusal to train a clinical eye on his subject matter, preferring instead to favor a casual, often accidental-seeming gaze, has encouraged a subjective, humanizing tone in New Topographic work generally. Adams responds to scenes that, although devoid of overtly associative imagery - or, conversely, peppered with factors that tend to bring a gasp to environmentally sensitive viewers - invoke poignant response; context rather than content dictate Adams' point of view, and still he shoots from the heart. This was made variously clear in this gallery's gently didactic display of Adams' publications, but driven home by the single sequence of photographs, "A Road Through Shore Pine," exhibited in the main space. These eighteen black and white prints simply document the passage along a road leading from the northern Oregon interior to a foggy, windswept beach on the coast - a road, according to the artist, "that my family traveled often and fondly" and that he and his wife now visit "for the example of the trees." Adams otherwise on the pines, sometimes capturing them in silhouette, other times bringing forth the tangled burr of their assembled texture. Highly sensitive to the characteristics of the gelatin silver print, Adams revels in the detail he can bring forth in the medium, a detail that emphasizes contour and depth at once, allowing overall composition to be constructed of myriad parts. In this case, at least, it is the light - its vividness in any one picture, its dramatic modulation from image to image - that energizes and unifies the series, and brings forth the emotional nuance Adams seeks to share with us. (Fraenkel, 49 Geary St., S. Francisco. www.fraenkelgallery.com) 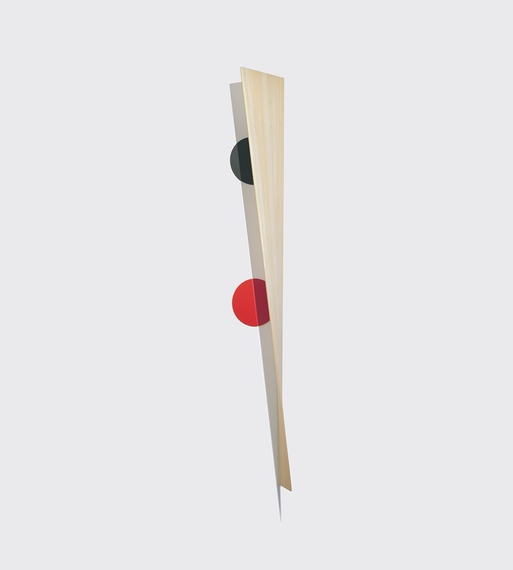 Tony DeLap has achieved his status as one of the grand old men of West Coast art - and American art in general - by cultivating an aesthetic of quiet surprise, a way of capturing the quality of spectacle without resorting to the spectacular. Seen here in a nano-survey spanning a half century (a collage from 1961 representing his early, quasi-assemblage years), DeLap was able to display his gorgeous minimalism, and the gentle trickery that enlivens it and fills it with mystery, with a minimum of fuss appropriate to the work's own laconic clarity. The show's core was a long sequence of works on paper, studies for paintings and sculptures through the years, and it also featured at least two paintings from this year that perfectly embody DeLap's minimalism-with-a-wink (as did a large white thing that seemed to be draoped over the gallery's balcony ). But the greatest single curveball in the mix might have been the several multi-segmented works from the early '90s which counterpose unpainted - indeed, sculptural - wood structures, characteristically bending off the wall, with single-color circles hung flat and tucked partway into crannies determined by the three-dimensional segments. This was one more way of slipping shapes in and out of one another, as if performing a deceptively slow-moving card trick. DeLap's methods, after all, and indeed his entire aesthetic, derive from his lifelong interest in magic (specifically, but not limited to, prestidigitation) and the questions about human visual perception it raises. In this, of course, DeLap figures significantly in the discourse about perception that has long constituted a prominent segment of California art practice. But, as the selection on view here reiterated, DeLap's approach has always been to express and exploit the slippages in human eyesight through material rather than dematerialization, relying on concrete objects to make us question how we see what we see. (Charlotte Jackson, 554 S. Guadalupe St., S. Fe. www.charlottejackson.com) 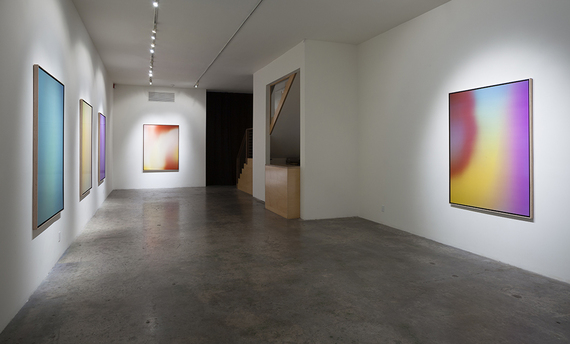 Rafaël Rozendaal may not be pushing the technical boundaries of new media, but he is employing new media very effectively to push the experiential boundaries of what we regard as pre-digital imagery. His new series of lenticular paintings claim the same wallspace as "traditional" abstraction, and from any angle appear to be reiterations of color-field practice (if often scored with straight-edge "creases" or "holes"), warmly saturated with resonant clouds of color. The merest movement on the viewer's part, however, causes dramatic shifts in hue, form, structure, and density; a shift of two feet can prompt a whole new exhibition to emerge. This would be just so much delightful trickery were the "paintings" themselves not entirely successful as gorgeous, expansive veils, every bit as seductive as a mid-60s Olitski or a prime example of the "lyrical abstraction" that grew out of color-field practice. In a funny way Rozendaal's lenticulars bring us a step closer to Olitski's dream of color itself suspended in air. Funnier still are the many websites Rozendaal has set up rather along the same lines: each constitutes a "painting" the way each lenticular work does, and metamorphoses over time without losing its basic formal premise. Those formal premises differ a lot more from one another than do the lenticulars; for every color-field-like composition, there is a geometric one or an op-art one or a organic-abstraction one or - going back a couple of years - a pop-art one or conceptual one or interactive one or... you get the picture. Rozendaal has been generating these websites-as-paintings(-as-performances) since 2001, and all are available on his home site. Some are gorgeous, some are rude, some are hypnotic, some are hilarious, some are biting, some... well, see for yourself here. They won't occupy your visual space the way they did in the gallery, projected onto the wall with a visitor-operated control panel to change and interact; but even on your laptop they'll put any mere screen saver to shame. (Steve Turner Contemporary, 6026 Wilshire Blvd., LA. www.steveturnercontemporary.com)