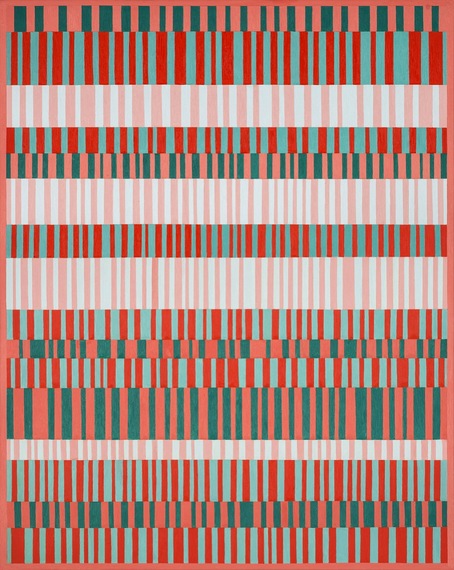 Matt Magee's art evinces a wide array of sources, but a focused sensibility - one that allows him access to many different materials, formats, and effects while keeping his formal language honed and supple. As can be sensed from his myriad gridded paintings, Magee - who was Robert Rauschenberg's archivist for some thirty years - clearly takes inspiration from various forms of notation, data organization, and gaming fields; he loads his quilt-like patterns not with references to outsider art (although his often-bumptious palette can seem "folky") but with arrays of points and swaths that resemble abacuses or primitive counting processes, or can seem like riffs on color-theory swatches. Still, what one sees driving this work is sheer delight, even wonder, in manifesting logical process as pure formal device. Furthermore, Magee realizes this with a disarming intimacy, a tenderness that restores all the humanity, and indeed sensuousness, to what might otherwise have seemed so many dry conceptual exercises. These devices do not play themselves out to their logical finite conclusions, à la LeWitt, nor do they spin their information in endless permutation, à la Darboven, but they divert endlessly within their own confines, playing not with symmetry but, it seems, with the laws of chance, or with even more arbitrary decisions. Minimal as these are in formal language - and in size - these tableaux and constructions prove tremendously magnetic in their obsessiveness and suppressed tactility, much like Agnes Martin's work - replacing her sense of infinite patience and transcendence with something more profane, almost witty, and certainly charming. Magee plays laughing Zen monk to Martin's stoic. (James Kelly, 550 S. Guadalupe St., Santa Fe. www.jameskelly.com) 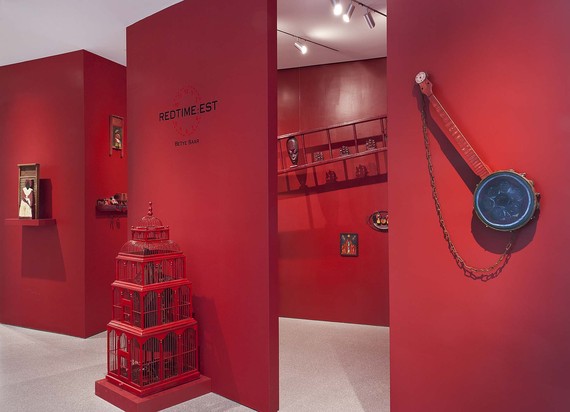 Betye Saar has enjoyed gallery shows on both coasts over the past year, two small ones in Los Angeles and a larger one in New York. All three have been based on a principle of categorical accretion, that is, the assembly either of similar objects or of objects whose narrative relationship proves revealing in ways they weren't originally supposed to. Or both. Color predominated in the earlier installations, the California one of last year cast in an aqua shade and the New York display bathed in red. The current LA exhibit comprises a single shelf hung on a white wall and bearing half-a-dozen old-school postal scales. But color is an issue here, too: the objects being weighed refer to African-American life, directly (almost uncomfortably so) or indirectly. Indeed, the saturation of color in the earlier exhibitions made a forced, a priori "issue" of color, as if to clarify the physical superficiality - but the emotional provocativeness - of pigmentation. "Redtime: Est," the New York show (itself an update and expansion on a Los Angeles installation of 2011), scattered a wide variety of objects throughout a reddened room; the red in each object, free-standing or on the wall, not only echoed the prevailing tone but dragged their respective objects into the overall visual scheme, almost drowning them - and certainly de-individuating them - in their own coloration. The effect was visually (and, thanks to the curious selection of objects and their odd disposition, haptically) disorienting and yet almost deliriously compelling, like some sort of funhouse or mad antique store into which one has stumbled as if in a horror-movie-inspired dream. The horror being echoed here, however, was that of racism - not institutional, or even institutionalized racism, but the racism deep inside us, that perversion of our pattern recognition that allows our sense of the other to obscure our sense of species and to manifest illogically, arrogantly, and cruelly. Of course, Saar, the veteran assemblagist, shares with us her love of superannuated tools and nostalgia-ridden toys, and does so through a strategically light touch with their actual co-assembly; she lets things speak for themselves by having them speak to, even with, other proximate things. Her use of 'darkie' figurines and other demeaning old gadgets thus takes on a double edge, inviting us to be beguiled by their antiquation even as we recoil from their meaning. (Roberts & Tilton, 5801 Washington Blvd., Culver City CA, www.robertsandtilton.com; and Michael Rosenfeld, 100 11th Ave., NY NY. www.michaelrosenfeldart.com)