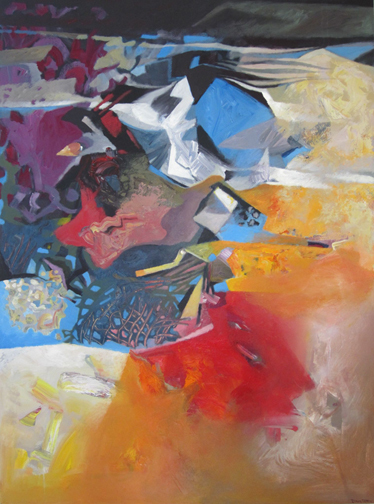 David Johns practices abstract expressionism without apology, breathing new life into a time-honored but clichéd style by putting its tenets unselfconsciously to his personal use. Johns does not rely on gesture per se, but understands abstract expressionist practice as a means of filling space with form in a manner that at once answers to and transcends the pictorial. His concern is the visual and extra-visual resonance of color, form, and composition, and, as filled with detail as even his largest works may be, he thinks in terms of space rather than image. He deftly segues from bright hue to dark, scumbled passage to sharp, translucent area to opaque, shifting texture and topography as readily as the land - or the weather - itself does. Johns' painterly concerns, especially with regard to color, are deeply informed by the symbol systems of the Navajo people. A member of the Dine nation, Johns has in effect harnessed a quintessentially American art language to the world view of an even more intrinsically American world view. This, of course, reverses the appropriation of Native American art and symbolism by the abstract expressionists in their years of formation - or, shall we say, it brings that appropriation full circle. (ZaneBennett, 435 S. Guadalupe St., Santa Fe. www.zanebennettgallery.com) 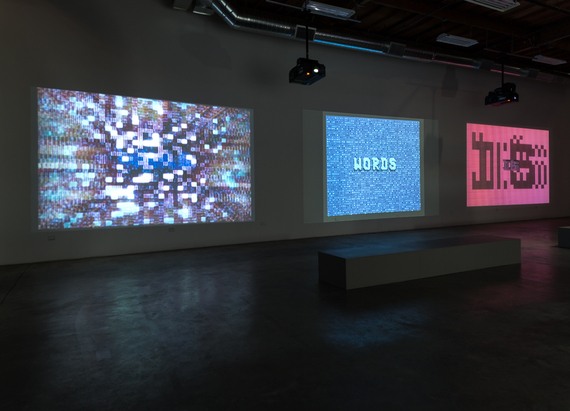 Stan VanDerBeek, best known in his own time for the radical, painterly and collage-filled films he produced in the 1960s, is now remembered as one of the earliest techno-futurist artists of the digital age, and not only for the Movie Drome he invented as an immersive experience in film imagery. VanDerBeek was exploring computer-generated film as early as 1966, working with technicians at Bell Labs, MIT, and other artist-friendly centers of computer experimentation to produce, among other things, his magnum opus, the series of "Poemfields" that combine words (usually others') with manipulated patterns of pixilation that continually change and pulsate. The words of the poems emerge from and submerge into the waves of square dots, while soundtracks provide complementary sensations that round out the enveloping experience. These are films, not computer-generated video: the results of VanDerBeek's programming input were played back on a cathode ray tube he filmed the playback. To be sure, such raw use of the most elementary computer graphics, fuzzy from several generations of distance from the source, seems very much of its time; but it does not feel dated, at least once you look past the pixels and "read," and hear, the films. The Poemfields were displayed here as immersions themselves, five of the eight works screened simultaneously on the walls of the gallery's main space. Visual patterns echoed one another between films, the soundtracks overlapping in surprising continuity, as if, despite the relative lack of color, the Poemfields were a large, continually changing series of paintings. A few other films (transferred to video) played in side rooms, alongside examples of VanDerBeek's static work, including vintage (ca. 1970)photocopy art, again of pixel patterns, poem-drawings (done on the typewriter), and early (1955) watercolors that reveal VanDerBeek's abiding interest in the intersection of form and language. (The Box, 805 Traction Ave., LA. www.theboxla.com) 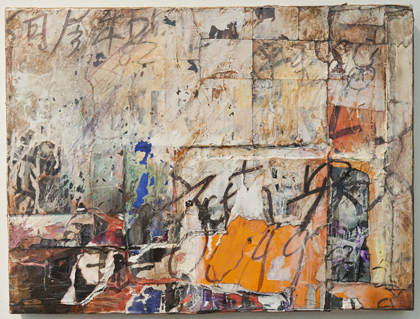 Kirk Pedersen has grown increasingly abstract in his formal handling of his long-favored subject matter, urban walls. This may grow out of his recent concentration on the walls of Asian cities such as Hong Kong and Tokyo, whose writings and markings are that much more opaque to Pedersen than equivalent passages at home. But his framing and even color decisions have become more purely painterly as well over the last decade, and his recent canvases, large and small, must be considered abstractions as opposed to hyper-realist depictions. This is all the more notable as Pedersen has been providing more room in his oeuvre for his actual photography - which, even while perforce providing a more reportorial look at the walls he favors, have a strong abstract air to them as well, certainly to judge by the photos exhibited here (wisely separated from the paintings). In its power and elegance, Pedersen's work conjures (without much resembling) some impressive forerunners. His camera work extends the "natural abstraction" of Aaron Siskind, Harry Callahan, and other (mostly American) mid-century photographers influenced by abstract expressionism, delighting in patterns and structures found almost by chance in the camera's lens. By contrast, Pedersen's paintings suggest the work of another mid-century group, the European "new realists," specifically those such as Jacques Villeglé, Raymond Hains, Mimmo Rotella, and Wolf Vostell who (re-)created urban surfaces as palimpsestic collages. Such "dé-collage" tended to be dense and almost illegible, free of any handmarks, while the walls Pedersen conjures or captures are at least as much inscribed as collaged; similarly, his photographic evocations of city walls revel in the tension between image, information, and pure form, complicating the approach of earlier photographers. In this regard, Pedersen maintains an emphatic aesthetic and spiritual consistency between his photography and his painting. (LAUNCH LA, 170 S. La Brea Ave., LA. www.launchla.org) 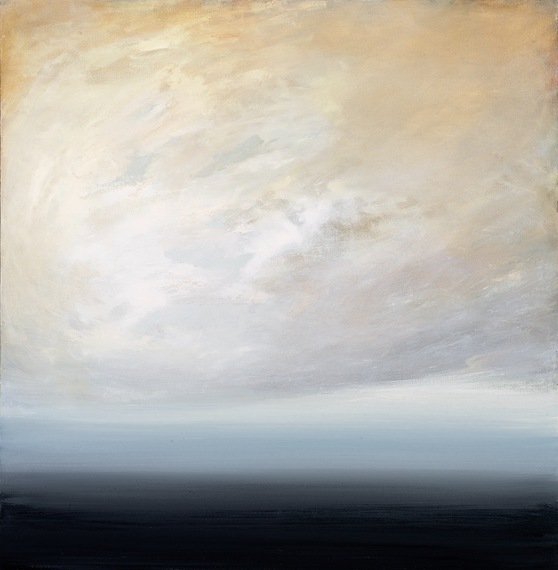 Ray Turner paints with a quiet bravado, daring himself to conjure coherent and easily comprehended imagery from a froth of paint. For the past several years Turner has concentrated on a highly focused form of portrait painting, proving to be staggeringly adept at describing readily identifiable visages from a few juicy, well-placed strokes. Before that, Turner had made his mark - literally and figuratively - with vigorously painted land- and seascapes, relatively free of detail, in which the main task he set himself was to evoke atmosphere and climate through the manipulation of color, tone, and texture. Turner returned to that approach, and subject, in the works of this exhibit. Although they don't adhere to a single size, as the portraits do, Turner's scapes all follow the same restrictions: topography is described through modeling and silhouette, surface through brushstroke, and space and temperature (as well as relative moisture) through light. The temptation is to say that these paintings are ultimately all about light, and to compare them to Turner's 19th century British namesake. But while Joseph Mallord William delighted in the virtuosic exposure of detail amidst the looming brilliance - the better to provide at least the rudiments of identity to his places - Ray wishes to expose us to vast emptinesses, wet deserts too expansive for mankind to be able to leave a traceable impression. This is not a European approach (although certain Barbizonistes and surrealists came close), but an American one, North and South alike - an American dream, admittedly, and less and less the reality, but still an image impressed pervasively on the imagination of the Western hemisphere. Is our latter-day Turner indulging our nostalgic impulses? It is more that he regrets those impulses turning into nostalgia in the first place. Loss reverberates through these voids. (Toomey/Tourell, 49 Geary St., S. Francisco. www.toomey-tourell.com)