HuffPost Arts' Haiku Reviews is a weekly feature where invited critics review exhibitions and performances in short form. Some will be in the traditional Haiku form of 5x7x5 syllables, others might be a sonnet or a string of words together. This week Peter Frank, George Heymont and Laurence Vittes give quick takes on visual arts, theatre and classical music from Austrian nightlife and "Hair" for the ADD crowd to rockin' cellos and digitizing your vinyl. Is there a show or performance that you think people should know about? Write a Haiku with a link and shine a light on something you think is noteworthy too. 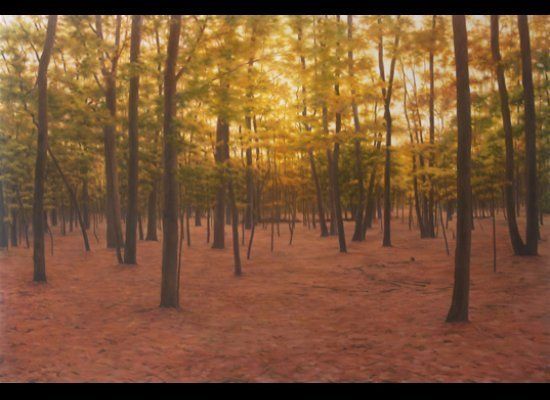 1 / 31
<strong>April Gornik</strong> can still make an "ordinary landscape" a very extraordinary image. She manages to invest her views, whether wooded or desert, with preternatural light and oddly uninflected atmosphere, so that we can't stop looking at these pictures even though they fairly thrust their artificiality at us. That is to say, not only does Gornik invent these places, she renders them so as to make their invention their real subject matter. Their pictorial qualities at once seduce us, show us their beauty secrets, and reveal the hollowness at their core. It's a visual hollowness, not a spiritual one; there is an almost tragic poignancy to these ersatz scenes, and a subtle critique of the fact that we typically apprehend nature through such a thick screen of mediation. Gornik herself is less concerned with whether or not such imagery actually "lies" about nature - all imagery lies about nature because it isn't nature itself, but simply a representation - than she is with the fact that, in deriving pleasure from such imagery, we might fail to distinguish such pleasure from that nature itself affords. This almost moral ambiguity comes through more intricately in the landscapes than in the seascapes, which often seem to be simply and flatly about optical representation per se. (Danese, 533 West 24th St., NY; thru Nov. 12. <a href="http://www.danese.com" target="_hplink">www.danese.com</a>) - Peter Frank <u><strong>APRIL GORNIK, <em>Light in the Woods</em>, 2011, Oil on linen, 72 x 108 inches</strong></u>