HuffPost Arts' Haiku Reviews is a weekly feature where invited critics review exhibitions and performances in short form. Some will be in the traditional Haiku form of 5x7x5 syllables, others might be a sonnet or a string of words together. This week Peter Frank, Laurence Vittes and George Heymont give quick takes on music, theatre and visual art from Seattle to Spain. Is there a show or performance that you think people should know about? Write a Haiku with a link and shine a light on something you think is noteworthy too. 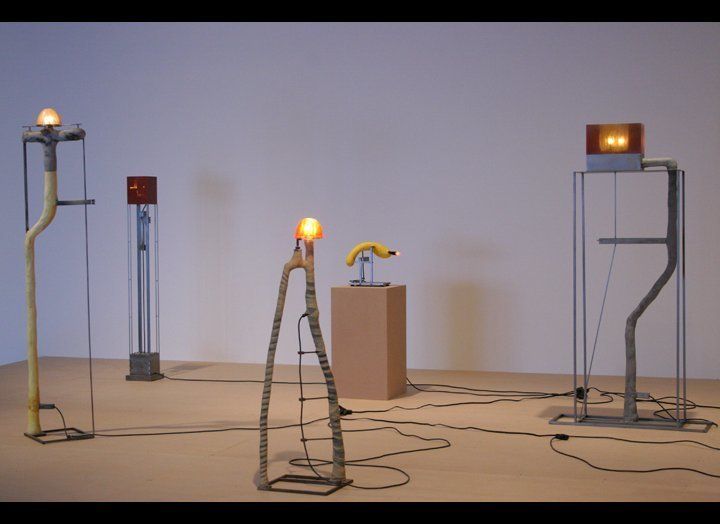 1 / 22
<strong>WHAT:</strong> David Lynch <a href="www.williamgriffingallery.com" target="_hplink">William Griffin</a> 2902 Nebraska Ave., Santa Monica Through May 28 <strong>HAIKU REVIEW:</strong> David Lynch started out as an art student and, like most such students, he can't wander too far afield without circling back. Variously accomplished in painting, drawing, and photography, Lynch's most engaging work in this show is his sculpture - functional sculpture, it turns out, although given their wattage, these weird wired structures function better as night lights than as reading lamps. Their considerable charms are primarily sculptural, oscillating between the organic and the architectural but always displaying (to little surprise) an animated, almost anthropomorphic energy, not to mention wit. Next to the lamps' handsome, eerie self-containment, the cartoonish narratives of the several large paintings on view - mixed-media reliefs, really - seem histrionic (although almost yummy in their physicality). Lynch's famously jaundiced view of human perversity is not relieved here by his equally profound sense of the quietly tragic, but it is in his delicate, grayed-out drawings, where - as opposed to the paintings - the victims and even perpetrators of dopey fate, human or otherwise, achieve a Kafkaesque anti-nobility. - Peter Frank
DAVID LYNCH, Lamps, 2011, installation